The title might be misleading/confusing. I'm building an amplifier with TDA2003 IC's which could be both suitable as a guitar amplifier and as a music amp. Where diodes come into this circuit? As you might know most transistor based amplifiers clip really harshly and it's amplifiers way of telling you "stop asking more from me!".

The idea I have - putting soft clipping diodes (perhaps 1N4148?) before the input of the amp and to manipulate it in a way that it starts softly clipping just before the amp could say "little more and I will be angry". 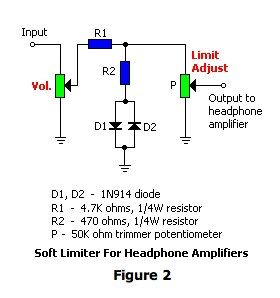 What's the point of that? You would start knowing when the amp starts to reach the peak of clean amplification and you would still get in comparison a nice more overdrive like tone rather than instant angry distortion. For me this is great as my amplifier is going to be used for both guitar and music so in (my) theory it should sound quite great both at low and high levels of amplification for both guitar and music!

Though I've came across a problem - how do you manipulate the diodes so they start clipping only at specific input level? Would it have to be resistors before diodes? And would this affect music audio listening quality when the signal is supposedly clean (and soft clipping diodes are on vacation until input is higher)__? P.S. perhaps you know any great diodes that clip softly besides popular 1N4148?

That new schematic works fairly nicely. You should be able to click on the circuit below and simulate it. You end up with the output being clipped but with nicely curved corners rather than hard stops at the top and bottom.

Not the answer you're looking for? Browse other questions tagged amplifier speakers distortion voltage-clipping guitar-pedal or ask your own question.

3
How do I Implement Soft Clipping in an Audio Circuit? Or should I just Attenuate the Signal?
0
What frequencies blow out the speaker most?
1
filter between amplification stages of a distortion pedal
0
What causes amplitude clipping of single stage CE BJT amplifier with a bypass capacitor?
5
Need help designing and implementing an op-amp based distortion circuit
2
Why does the positive wave of my class AB amplifier output get clipped far below rail voltage?
1
DIY distortion pedal help
1
Class AB power amplifier output clipping when input exceeds 1.7V
5
Overdrive guitar pedal sounds better without a clipping diode