I am a beginner casual electronics hobbyist trying to learn about how chips work internally. In order to accomplish, this I went out and got a 555 timer soldering kit and started experimenting with it.... things are not going so well.

I am working my way through the circuit as best as I can but I am currenlty stuck on the output stage section of the circuit, I am simply unable to understand how that works and I was hoping someone could lend me a hand.

For your reference, below is the original 555 timer schematics: 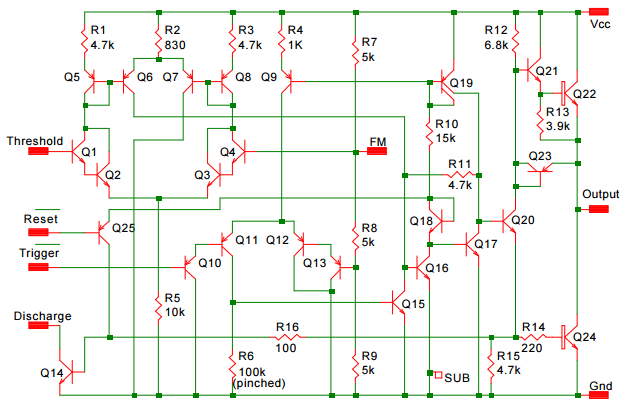 After looking at the diagram and reading throug some of the documentaion, I learned that the output stage constist of transistors Q20 throug Q24. With that in mind, in an effort to try to undetand how all this works, I tried to isolate the output stage from the circuit and recreate it using an online circuit simulator. This is what I did: 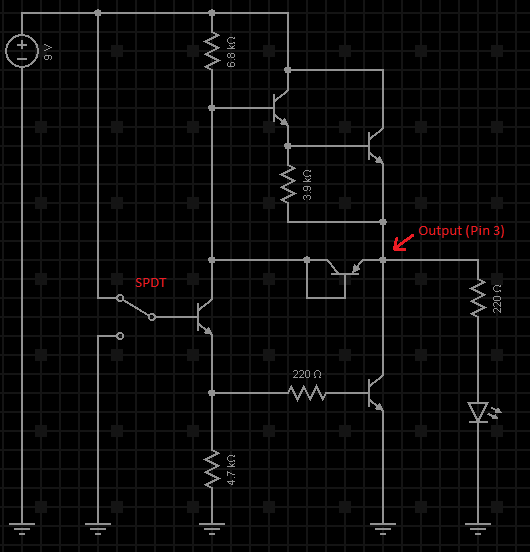 The problem is that the circuit does not work as expected (output does not sink and source current). Could someone please tell my what am I doing wrong? What do I need to do to my online symulator circuit to make it work? I would like to get it to work on the symulator so that once working I can mess aroudn with it and see if I am able to figure out how all these works.

click here to be taken to the online simulator

Here is something to try. Q20 wants to be a phase splitter. You can read about that here; enter link description here. Because you are tying Q20's base directly to 9V it is not working like a phase splitter. It is two forward biased diodes BC and BE. The means both the base of Q21 and the input to the 200 Ohm resistor are at 8.3V. So try this, put a resistor between the switch and Q20 base. Size it to get say 1V at the 200 Ohm resistor. When you do this, you will get about 1.5mA flowing thrugh Q20 emitter. This same current will flow into the collector trying to drop about 10V in the 6.8k resistor. Since it can't the transistor will saturate at maybe 1.1V. Now you will have Q24 on and Q22 off. Driving the base directly with 9V has them both on.

I upped owg60's reply. It's a useful answer and correct. But I'm motivated to add something since you are trying to learn things. While that answer may be a necessary one, it might not be a sufficient one.

There are a couple of routes you can take to figuring this thing out. One is to go examine the prior circuit and see how it drives \$Q_{20}\$. That would be one of several different ways. But I'll start with the more direct one.

If you read their "Principles of Operation" document (which could be better written but is more than I often see, too) on page 8, you can see their quick note about \$Q_{23}\$. The upshot of the note is that you don't need it. It's there for a special case. So the first thing to do is to get rid of it so it doesn't confuse you: 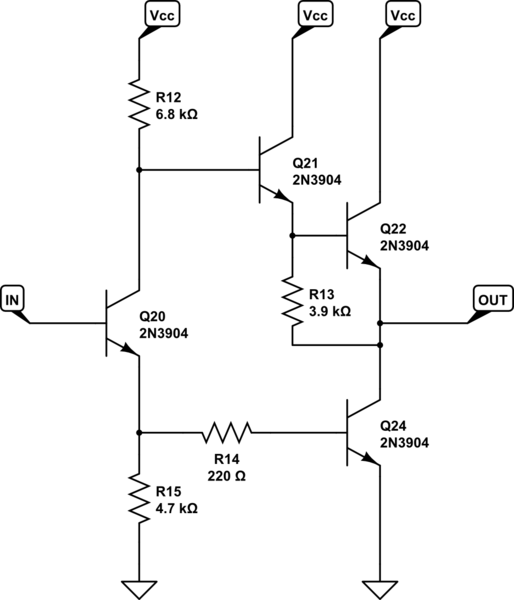 That clears up some clutter. Now, you already know that this circuit is in one of two states, LOW (off) or HIGH (on.) The only problem here is in working out what exactly each of those actually mean, with regard to driving \$Q_{20}\$ properly at its base. Very luckily in one of these cases, the Principles documentation (page 8, "Case: Output Pin On") tells you exactly. It says that \$Q_{20}\$ has no base current and is, itself, turned off. Very unluckily, this same Principles documentation (page 8, but now in "Case: Output Pin Off") does a terrible job of telling you exactly what is happening to \$Q_{20}\$. It just says something "drives current" into its base, is all. It doesn't say what the voltage is, sourcing it. It doesn't say what the current is. It just leaves you wondering.

Let's revisit the output section and try and work out a very rough sketch about it from what we've learned by that short bit of reading their documentation: 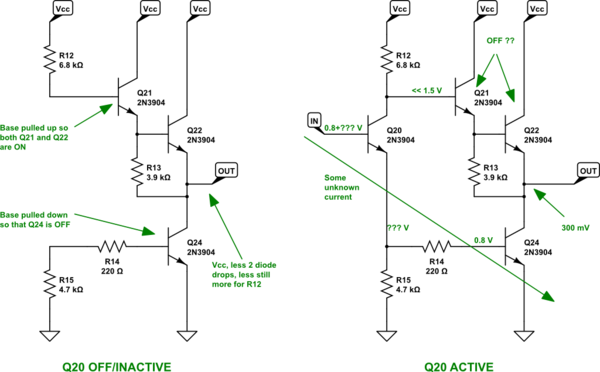 We can understand things when \$Q_{20}\$ is off and the output is perhaps a few diode drops, plus a bit, below the power supply rail. That makes sense and that would be easy to drive in the simulator. Just drive \$Q_{20}\$'s base to ground. That should just work, assuming we read the documentation correctly (or otherwise agreed with it.)

So you need to take this into account when you are setting up your simulation. Does it matter? Of course it does. If you drive the base of \$Q_{20}\$ all the way up to the rail, then it's emitter is probably about a volt lower. And since \$Q_{24}\$ base is close to ground, you have a huge amount of current through \$R_{14}\$. But... there's more. \$Q_{20}\$'s base is at the top rail, so its now strongly forward-biased BC junction (it's saturated heavily) will supply the Darlington pair all it needs to run hard. That's the problem.

You need to pinch the Darlington's pair of base-emitter junctions together so that they are effectively off and not on. You can do that if \$Q_{20}\$'s base is perhaps near \$1.5\:\textrm{V}\$. But you can't do that if it is nailed to the top rail voltage as then \$Q_{20}\$'s base at the top rail will now strongly forward-bias the BC junction and will supply the Darlington pair very hard while also \$Q_{20}\$ is also very heavily on because of the huge drop across \$R_{14}\$ supplying lots of current as well. So there will effectively be a short from \$V_{CC}\$ to ground (and the output voltage who knows where exactly) with lots of current pouring through \$Q_{22}\$ and \$Q_{24}\$.

(You could go back to look at the schematic and see what is happening earlier. If you do, you might see that they are driving about \$500\:\mu\textrm{A}\$ into the base, to drive the output LOW.)

But you could also just accept the analysis and ask yourself if you can cheat a bit and just use a voltage source at the base. The answer is that you probably can. But you need to be careful. Too much voltage at the base and you turn on the Darlington pair. Too little and you turn \$Q_{24}\$ off.

Things will start going bad for this isolated circuit roughly about where \$Q_{21}\$'s base is more than \$1.2\:\textrm{V}\$ over the output. The reason is that although the Darlington is actually turned on slightly at this point, and may be sourcing perhaps still as much as \$1\:\textrm{mA}\$, \$Q_{24}\$ can sink it and it won't impair the output. But more than that will become a problem.

Not the answer you're looking for? Browse other questions tagged transistors 555 output totem-pole or ask your own question.