I'm experimenting with controlling the transport of an old super-8 film projector via Arduino. My current solution starts/stops the motor by simply switching the projector's pause button via relay, which gives me one-directional control and one speed.

But I want to control both the direction and speed of the motor. The projector has buttons for forward/backward and a wheel connected to an adjustable resistor for speed, but the best thing would be if I could override these (late 1960s) controls entirely and drive the motor directly from the Arduino.

a) Help identify the type of motor, as I have no idea (my guess would be some AC type..?)

It says 55W / 7000rpm on the motor, and it appears that it runs on mains voltage. The big transformer to the right appears to be only connected to the lamp.

Here is a picture of the motor:

Beneath the motor is its switchboard, on the rear side of which are the user-buttons. The 4 leftmost wires connect to various locations on the motor (coils?).

This is hard to see in the pictures, but the two round capacitors are both connected to the motor's outer frame, one connects to the black wire towards the motor, the other is connected to the blue wire at the right side of the switchboard.

So there's 3 wires leading to the switchboard which are not connected directly to the motor. The rightmost (black) comes from that voltage switch beneath the power inlet. The blue one also comes from the voltage switch, after passing the speed control (adjustable resistor) first. The brown wire is connected to the rightmost pin of the power inlet.

Here is a closer look at the wiring: 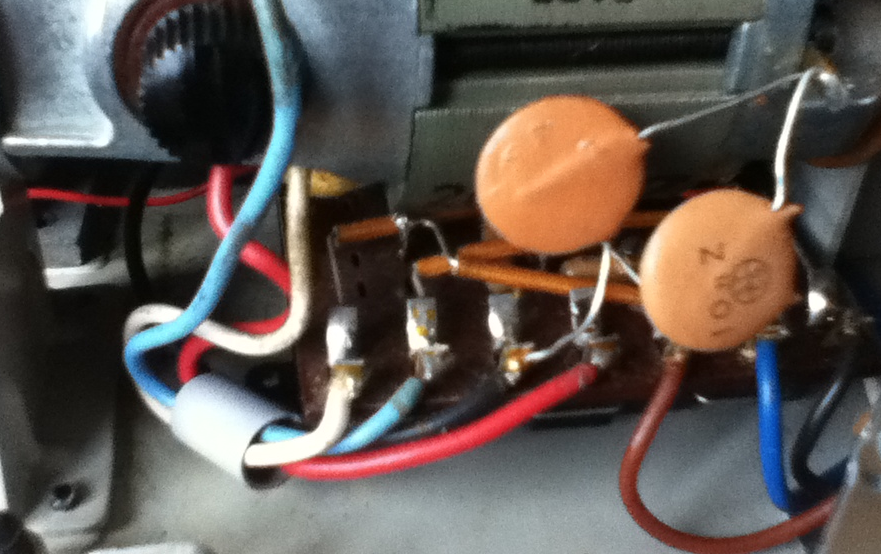 b) What would a control circuit look like and what parts do I need? I guess I need a special driver unit capable of handling the 240V mains voltage?

That's definitely a universal motor (also called a series wound motor because the stator and armature are connected in series). Unfortunately I can't help you with your second question as I don't have any experience controlling universal motors.

Since its an AC motor, first for safety, you will want to be careful to isolate any control circuitry from mains.

Since its a low power (55w) you should be able to get away with a standard dimmer using an SCR for speed control if you use AC. I have had some success using an LDR and an LED using cheap dimmers from ebay (to save reinventing the wheel) There is a bit of messing about required and you need to use an RC filter so the LED does not flicker. There is every chance if the POT you have there is wired as a variable resistor, as is the case of these small modules you could use an LDR instead there directly. If you want off the shelf I found this

BUT as its one of these universal motors, or as commented certainly looks like one, you may get away with DC... but then you need a DC source. There are plenty of DC motor drivers for use with arduino that should handle the motor, so long as the voltage requirement is not too high. It would be interesting to stick a DMM on there and see what the motor is being fed.

Not the answer you're looking for? Browse other questions tagged arduino motor or ask your own question.

4
Multiple motor speed control with a single triac
3
arduino - how to read and control the speed of a 12V - four wire fan?
0
Determining how to make 7-wire AC motor run without wiring diagram
0
Wiring three speed motor
2
How to Wire a 120V Dryer Motor for Use in Other Projects?
0
Need help reversing the rotation my motor
1
How to connect this 3 wire AC motor?
1
Wiring a multi-speed motor from a tower fan