Is it possible to toggle a monostable 555 circuit?

I've got a typical monostable 555 circuit, with a long pulse, set up pretty much exactly like this: 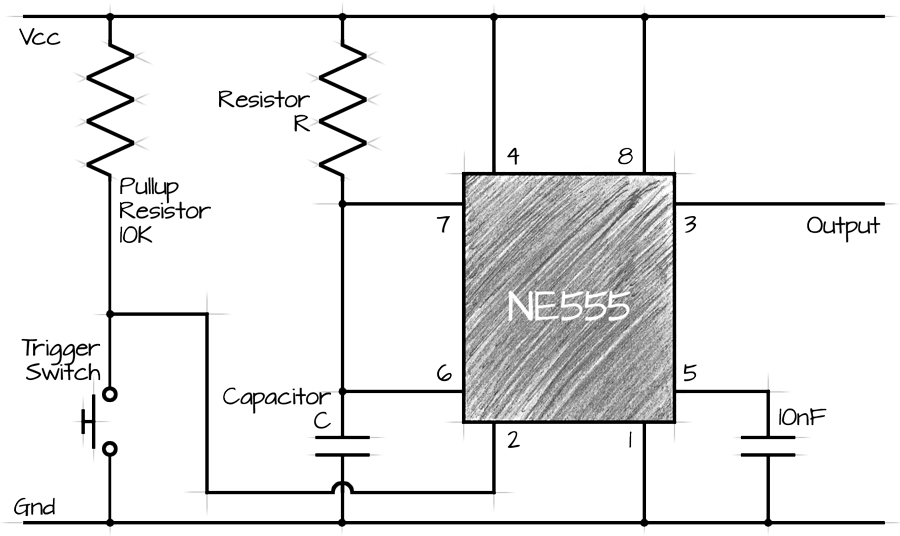 However, I want to be able to use this circuit in a way that the trigger switch can also shut off the output immediately, before the pulse would normally end, and preferably using the same button for initiating the pulse as well as ending it. I know that it's possible to use a 555 to make a toggle button, is it also possible to easily combine these functionalities?

This also has a retrigger wait time equal to the One shot time but cuts the time short with the switch. It also has 10ms debounce filtering.

user must define all 3 values

One sneaky solution using an ADG419 2-1 analog mux (also called a SPDT analog switch by some) to route the button press to the correct pin (TRIGGER or RESET) on the 555 is depicted below: 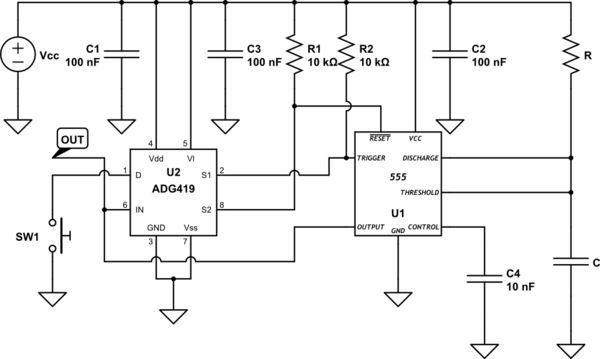 This works as follows: when the 555 output is in its normal LOW state, the ADG419 connects D to S1 as its control (IN) terminal is driven by the 555's output, connecting SW1 to the 555's TRIG terminal. When SW1 is pushed, the 555 monostable is triggered and drives its output HIGH, causing the ADG419 to connect D to S2, which connects SW1 to the RESET pin on the 555 instead. Pushing the button again pulls the 555's RESET pin low, which causes the 555's output to get pulled low, switching the ADG419 back to connecting SW1 to TRIGGER and starting the process over again. The same logic holds if the 555 times out -- its output again goes low, causing the ADG419 to connect SW1 to TRIGGER.

(The original DG419 is available as well, and somewhat cheaper, if you can't get your paws on an ADG419.) 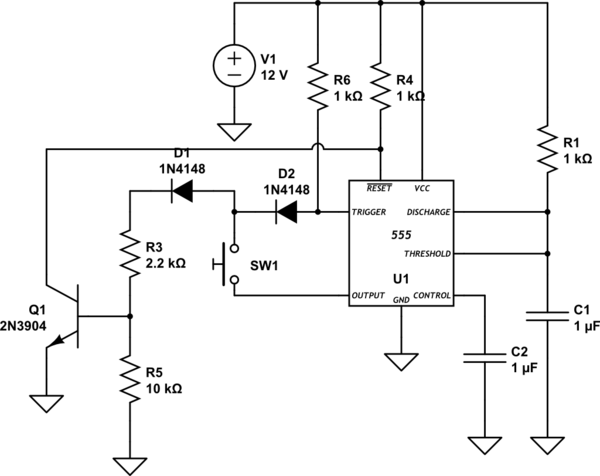 How about this schematic?. I think it should reset by the switch while the output is high. A small correction.

Not the answer you're looking for? Browse other questions tagged analog 555 or ask your own question.

1
Why does this circuit keep killing my 555 timers?
6
555 timer, one shot trigger
2
555 monostable/astable on one chip
2
555 timer monostable operation not so stable
0
555 Timer in monostable mode with reset on the same momentary button
1
Why does this Edge Trigger Work on input of 555 monostable config?
1
Replacing push button by transistor in 555 circuit
0
How to make 555 timer output fall