i have been designing flyback converter of a 5Volt 5 ampere specifications output deriving from 220v ac mains. But i have been stuck at one point and can't seem to get out it. Efficiency is particularly very poor in this case getting around 49% when running at 25W output. Earlier, due to leakage inductance voltages were going around greater than 600v on the drain of the MOSFET(10n60) causing high stress on the FET.

So to clamp the voltage , introduced RCD clamp(50nF, 3-5k). I know its a very low value of resistance used causing excessive losses. But only at this value i was able to clamp the voltage down to 550v running at full load.(For stability purpose this is too high, but can't go down anymore without decreasing resistance). At this, MOSFET temperature does not increase to high levels.

Whether this problem is coming due to the leakage inductance too high for this circuit or some other problem?

Since, i am winding transformer by hand not by machine, already it is a problem to wind 22 swg wire that too 5 strands so that is why i am thinking it might be a problem of magnetizing inductance too high in this circuit. 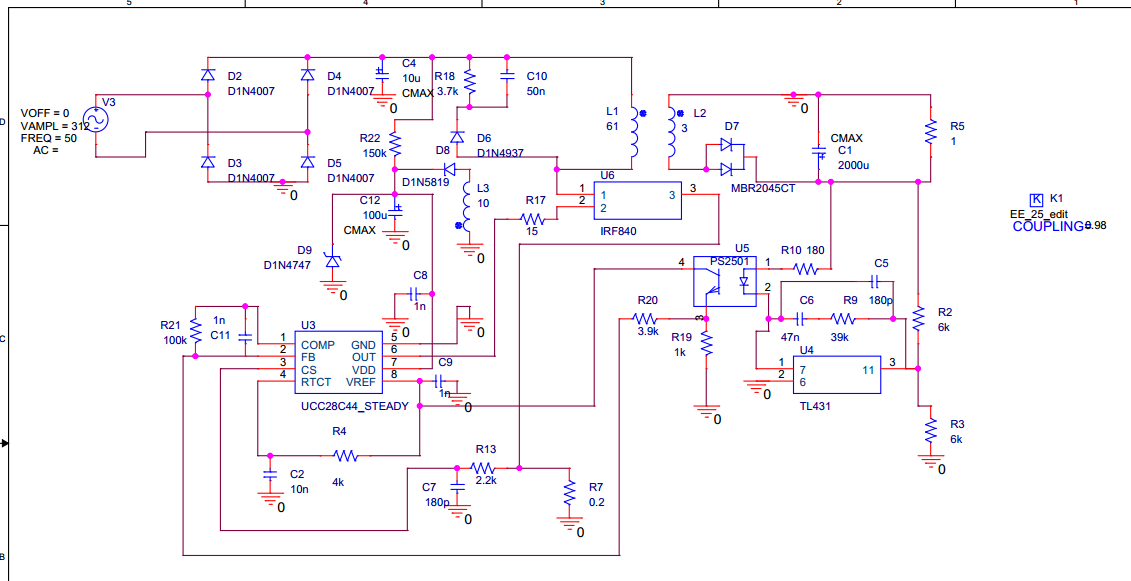 Edit 2: The solution I got was to increase the current sense resistor to limit the peak current thereby less energy stored per cycle causing resistance value used to almost negligible(50kohm,considering losses). Efficiency boosted up to 76% at 5A Load. Still trying to increase it up to 85 by optimizing the core and rectifier losses. Will write the results soon.

Note that primary winding does affect input losses. Your transformer design seemed a bit odd to me (61 turns primary for a 40kHz offline converter seems quite low).

So I re-designed your transformer:

Besides, a few extras I can suggest:

If you're interested, take a look at one of my offline flyback designs (32V/3A) and ST's application note.

Not the answer you're looking for? Browse other questions tagged transformer flyback efficiency loss diode-clamp or ask your own question.