Are ferrite beads supposed to be magnetic?

I have replaced the ferrite bead on my audio cable with new ones that I just bought. But I have tested them and they aren't magnetic, it's just like a cylindric metal inside it, but I thought it has to be magnetic to perform it's task.

Yes, ferrite will be ferromagnetic. A strong magnet should glomp onto the core that's inside the plastic snap-on housing. It should be visible when you open the housing since the two halves of the core must be in contact for the core to work properly. 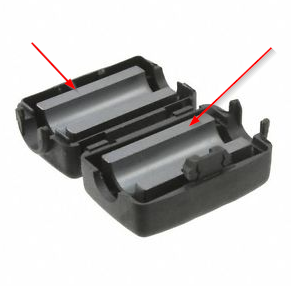 There will be negligible remanence so it won't be attracted to, say, iron filings as a magnet would be. It also won't be highly electrically conductive (certainly not like copper or aluminum).

If it isn't ferromagnetic (attracts a magnet) maybe it's fake or something.

Spehro already gave you a good answer. I'll add some points worth noting, since you seem to have some misconceptions on what a magnetic material is.

First, let's clear up the terminology you are using: when you say "magnetic", you really mean "magnetized" (permanently, i.e. without an external magnetizing field). A magnetized object is an object which generates a magnetic field.

Some excerpts from the Wikipedia articles I linked above:

In physics, several different types of magnetism are distinguished. Ferromagnetism (including ferrimagnetism)[1] is the strongest type: it is the only one that typically creates forces strong enough to be felt, and is responsible for the common phenomena of magnetism in magnets encountered in everyday life. Substances respond weakly to magnetic fields with three other types of magnetism, paramagnetism, diamagnetism, and antiferromagnetism, but the forces are usually so weak that they can only be detected by sensitive instruments in a laboratory.

Permanent magnets (materials that can be magnetized by an external magnetic field and remain magnetized after the external field is removed) are either ferromagnetic or ferrimagnetic, as are the materials that are noticeably attracted to them. Only a few substances are ferromagnetic. The common ones are iron, nickel, cobalt and most of their alloys, some compounds of rare earth metals, and a few naturally-occurring minerals such as lodestone.

Not the answer you're looking for? Browse other questions tagged electromagnetism magnetics electromagnetic choke magnet or ask your own question.

1
Magnetic pulser circuit
0
magnetic flux cut by a magnet
1
How does shielding work in VGA cables?
0
Magnetic resistance of an electromagnet with varying cross section
0
Can an alternating magnetic field be “informationally” shielded?
0
AC Electromagnet from a transformer
1
Treadmill causes nearby electronics glitch