What are the pros and cons of having higher/lower dBi and dBm?

I have a UHF reader with integrated 7dBi and 9-30dBm output power.

Can you explain to me what do these 7dBi and 9-30dBm mean, in a way an ordinary people (like me, who don't really have knowledge in network) could understand. As far as I researched, there is no absolute formula to get the distance of a dBi, theoretically speaking dBi won't affect the range of an antenna? but I also found out that higher dBi means higher gain and more directional. What does it mean?

In other words. What could possibly the pros and cons of having a higher/lower dBi and dBm?

If possible, can you give a situational explanation.

AndrejaKo's answer looks good but you specifically requested a layman's answer so I'll try to make it even less technical.

Firstly you are correct, there is no simple way to go from dB to range. Anything to do with radio involves far to many variables to give a simple 1 number answer for anything even close to real world usage.

However all things being equal you can apply some approximate rules of thumb.
For conventional radio signals a 3dB increase will give you a ~40% increase in range, 6dB a doubling of range.
For RFID type applications where signals have to bounce back to the reader again this effect is halved, 6dB will give you 40% more range, 12dB a doubling.

dBm is simply a measure of the power output. It is possible to convert this directly into watts if needed. 9dBm = 8mW, 30dBm = 1 Watt.

dBi is used to measure the antenna gain which is also indirectly a measure of directionallity. This is always a trade off.
If we assume the antenna is perfect then it will transmit all of the energy it receives from the electronics (a reasonable rough approximation for a good antenna). If it sent that energy equally in all directions the antenna would have a gain of 0 dBi, this equates to a gain of 1.
If you want to get more signal energy to go in a specific direction then you need to reduce the energy going in the other directions. If an antenna sent energy in a perfect hemispherical pattern it would have a gain of 3dBi.
Real world antenna gain patterns are far messier than the ideal but if an antenna has a gain of 7dBi then it's probably got a region about 90 degrees wide in which it transmits most of it's energy. That doesn't mean it doesn't transmit anything in other directions but the signal will be a lot weaker outside of that main region.

Why use dB for this sort of thing when we could use Watts for power and a normal linear gain number for the antenna? Three reasons:

Some of those reasons may not be entirely true.

If getting sufficient power to the tag is the limit then the maximum range follows the inverse square law and a 3dB increase in signal will give a 40% increase in range, a 6dB increase will double the range.

If reading the reply is the limiting factor then the range limit is 1/power^4. A 3dB increase will give a ~19% increase, 6dB a ~40% increase and 12dB will double the range.

Which one of these two is limiting the range depends upon the tags and reader used. Older tags needed a fair amount of power and so the first of those two limits, the tag powering up, was often the limiting factor. Newer tag silicon is far lower power and so it's less certain what the limit will be these days.

When I indicate an increase in dB that can come from either source, if you change both then add the two changes together to give the total effect. If the increase comes from antenna changes then keep in mind the dB value is only valid for the direction with the maximum signal strength, that direction could change if the antenna changes.

The thing you need to start researching is called link budget. Your range depends directly on receiver sensitivity, your equivalent isotropic radiated power (EIRP) and the path loss.

When you're calculating EIRP, you add the transmit power (in dBm) to the antenna gain (in dBi) and then subtract system losses, such as coaxial cable loss, connector loss etc. So the formula for EIRP is:\$EIRP=P_{tx}+G_{tx}-L_{system_{tx}}\$

So how do transmitter power (in dBm) and the antenna gain (in dBi) work?

Well, antenna radiates power out and also focuses power in certain direction. The dBi value is the "gain" you get in the direction in which the antenna has maximum radiation compared to a "reference" antenna that does not focus power and instead just radiates equally in all directions. So the higher antenna gain is, the longer range you'll get, if the antenna is pointing in the direction in which you want to have long range. Also, if you go to some extremely high gains, it can get a bit complicated to actually aim antenna properly.

It's a bit difficult to go into more details when explaining things to someone who has no background, but just keep in mind that different combinations of antenna gain and transmit power can work well in different situations. For example, if you're building a short-range system, where you have a fixed base-station communicating with small mobile stations, then it's a good idea to have large antenna gain a the base station, so that you can hear the mobile stations well, and also have low transmit power, so that you do not create too much interference for others.

The output power pushed into the antenna when transmitting is 9 to 30 dBm. Using the 9 dBm figure, this means a power level that is 9 dB higher than 1 milli watt (notice the "m" after dB in "dBm" - this means the 9 dB number is relative to 1 milli watt).

7 dBi is a bit more tricky conceptually. It would be nice if an antenna could be made that transmits (and receives) radio waves in all directions at equally. Then it wouldn't matter if a receiver were facing the wrong direction; you'd still pick up a transmission with the same signal level.

This idealized antenna is called an "isotropic" antenna and this is where the "i" comes in when we say "dBi" because, what this means, is that your antenna is capable of receiving a bigger signal in one particular direction compared to the theoretical isotropic antenna.

It's also capable of concentrating the power transmitted in one direction compared to that which an isotropic antenna would produce. Look at this simple dipole antenna: - 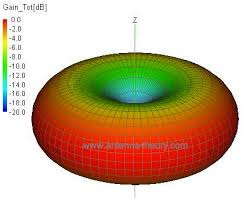 So, your antenna has 7 dB more gain in its optimum point relative to an isotropic antenna.

Not the answer you're looking for? Browse other questions tagged signal antenna frequency-measurement or ask your own question.