I like to detect current passing through a wire. I have only a very small opening (15-20mm diameter) that access to wire so using a current transformer is not feasible. I can touch the bare wire. (I can touch with a tip of a scope probe) The wire carries 1 - 10A and 220V. I am looking for a non-contact or contact way of understanding the current passing through. 10% accuracy is good enough.

A Hall cell insulated and pressed against the current carrying conductor will allow current to be monitored.

You will get a few zillion ideas from these images - each is hot linked to a page.

There are MANY hall sensors available which would do this job.
The items below are far from the cheapest but are better optimized for this task than many due to integrated "magnetic concentrators".

Digikey will happily sell you the devices below 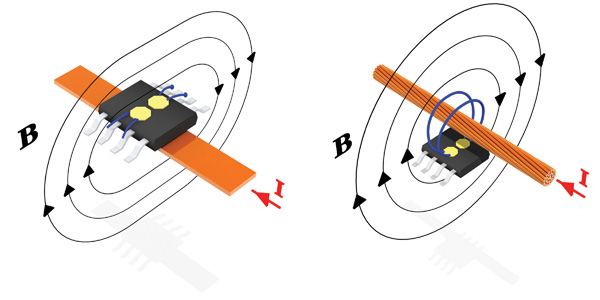 These novel, contactless current sensors consist of an integrated CMOS Hall effect sensor covered by an additional thin, ferromagnetic layer on its surface. This IMC layer acts as a magnetic flux concentrator, providing a high magnetic gain that increases the sensor's signal-to-noise ratio. The sensor is particularly appropriate for DC and AC current measurement. Such measurements are characterized by the need for ohmic isolation, very low insertion loss, fast response, small package size, and low assembly costs. Typically, current sensors are found in applications such as battery current monitoring, solar power inverters, and power inverters that drive traction motors in EVs (electric vehicles), and HEVs (hybrid electric vehicles). There is no upper limit to the level of measurable current of IMC sensors, since their output level depends only on the conductor's size and its distance from the sensor.

Datasheet here for one version - SOIC8.

One important difference between a Hall sensor and a transformer is that the Hall sensor works down to DC. If you are measuring AC current only, then that doesn't matter.

13
current sensor for small currents?
0
Strobe light failiure detection
0
Current pulse detection circuit
0
Design challenge: Detect finger-to-finger touch with nothing in between
0
Currents around transformer
0
How do Eddy Currents manage to "flow"?
0
Powering a small generator with a contactless rotating plate
0
Novice looking for help with a current sensor circuit