How does this circuit work with a transitor? [duplicate]

If the current flows from the left side of the circuit namely positive side Why doesnt the led burn as the resistor is placed after the LED or if flows from the negative side.Where does the base of thw transistor get current? 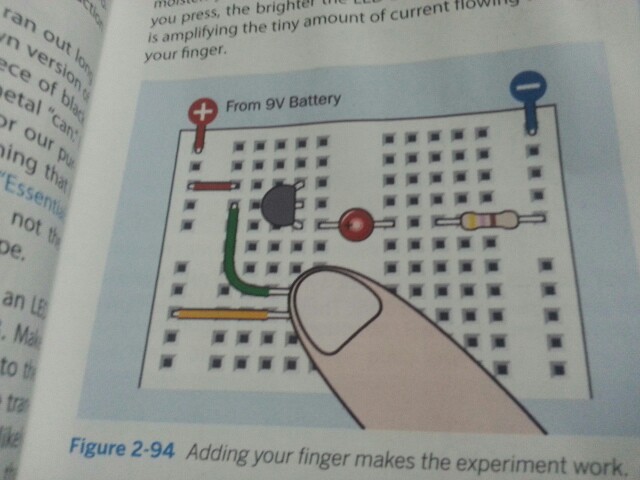 This is really two separate questions:

Why doesn't the LED burn as the resistor is placed after the LED?

The order of the LED and resistor doesn't matter. They can be in either order. Please see the question Roger Rowland linked to in his comment for more info.

Where does the base of the transistor get current?

It gets a tiny amount through the finger being held on the green and yellow wires. It will be a high resistance connection, so there will be only a tiny amount of current. The function of the transistor is to allow a much larger current to flow into the collector. Both of these currents then flow out of the emitter, through the LED. If the current gain of the transistor is high enough it will be able to light up the LED.

Its the npn transistor. The finger in the picture serves as the high ohmic resistor through which the base of npn is getting a small positive current.

When the npn gets a small positive current into its base, larger collector current flows from positive to the negative through emitter and into the LED.

Placement if the current limiting resistor for LED is not important. It can be before or after the LED.

However the circuit works well if the following is done. 1. LED and its current limiting resistor should be on collector at the positive side if the battery. 2. The base must be connected with a resistor such as 4.7K ohm to prevent possible huge base current which will blow the base-emmiter junction.

106
Why does a resistor need to be on the anode of an LED?

0
Idealized characteristic of power transistors
4
Spark when connecting battery module to DC power supply
0
How do the Capacitors get charged in a Half Bridge Inverter?
0
How does flyback converter with two MOSFETs work?
2
Why don't we worry about reverse recovery voltage and current of a diode in a simple circuit application?
0
Rubber insides and circuit transparent sheets of USB keyboard don't work outside of plastic case
0
Where the positive and negative side of an AC adapter?
0
Trying to understand a transistor data sheet
1
How does this control loop work?