How to Detect Back-EMF from Inductor

I am trying to make a motion detector with a photodiode, and I am trying to trigger a 555 when the photodiode goes from dark to light (this will detect a person crossing the detector, and not stay on forever if ambient light changes).

I realized that to detect the changes in the light, I would need an inductor. This is the idea for a schematic I have so far: 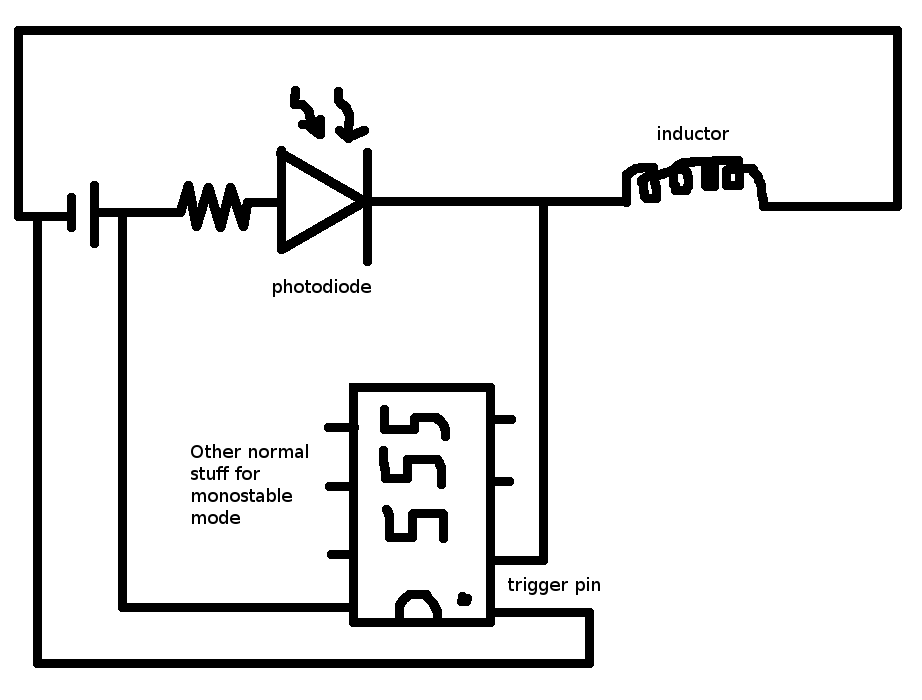 The usual positive current during normal operation and the forward emf from the inductor when it goes from light to dark won't trigger the 2-pin of the 555, but when the photodiode goes from dark to light, the inductor will give a back-emf that I hope to capture with the 555 (I have the 555 part down :D).

However, I am worried that if the voltage is too much and the change of light is too slow, then the v=L*di/dt term from the inductor will be less than the forward voltage and the sum will still be positive, not triggering the 555.

My teacher had the idea to put that resistor before the photodiode so I could maybe lower the forward voltage so the di/dt could be greater than it. However, I think that this won't work because this will linearly lower the current, and thus linearly lower the di/dt term (cuz linearity of derivative and all that) thus achieving nothing.

Would this circuit work? What does one normally do to capture the back-EMF? Are there any other pitfalls or considerations for this? Keep in mind that I am very new to this circuitry stuff, so tell me if there is something obvious that I missed.

So you start from a point of strength in that you can get a really good signal for only moderate changes in light intensity and R\$_F\$ can be lowered to reduce sensitivity. See also this google image page for hundreds of other ideas related to amplification of a photodiode.

So now the RC circuit is replacing the LR circuit and you are dealing with components that are more manageable in size and cost. High pass filter circuits are found on this google image page.

Not the answer you're looking for? Browse other questions tagged inductor photodiode back-emf or ask your own question.

10
Do solenoids exhibit back EMF like motors?
0
How does an inductor generate back emf equal to a source driving it?
3
LED and photodiode characteristics at very low currents
1
Will back emf damage a lithium ion battery?
4
Can a photodiode distinguish between daylight and white/blue LED?
1
Back EMF of an inductor in a DC circuit?
2
Photodiode Circuit for measuring light intensity
1
Protection against back EMF
0
Scenarios where Inductor back EMF would result in damage of circuit or component