Can a level shifting circuit shift voltage the other way around?

I'm working on a project where I use an FPGA and connect it to multiple servos (called AX-12), which are connected in a daisy chain. Each servos has a unique ID so them being connected in a daisy chain is not a problem. The FPGA transmits commands to the servos and after that the servos respond by transmitting their own packets (called a status packet, according to the datasheet). I want to focus on the respond part in this question.

The "CM-5" you see in the picture is replaced by the FPGA in my project.

According to the datasheet (which you can find here):

To operate the Dynamixel actuators, the main controller must support TTL level half duplex UART.

For the main controller' I'm using a DE2 evaluation board by Altera (later to be replaced by the DE0-Nano). This board's outputs for '1' is 3.3V. While 3.3V works for TTL, I found out that the servos respond better when they receive 5V.

To do this, I use this level shifting circuit:

So for the transmission part, all is well. The FPGA outputs the '1' as 3.3V and the servos receive it as 5V, which is good.

My question is about the voltage when I receive the packets from the servos. I assume (haven't checked) that the servos transmit the status packet bits in 5V. Does the level shifting circuit get the 5V and shift it back to 3.3V? And the 0V to, obviously, 0V? If so, how does it work?

If you look in the datasheet, you will see that the manufacturer says you should use a buffer with a pull-up resistor to 5V. I have tried using that buffer and it did no go so well. So what I'm also asking is, will that level shifting circuit use as a buffer?

Does the level shifting circuit get the 5V and shift it back to 3.3V?

Yes, that circuit works bidirectionally although it might be a good idea to have a pull-down resistor on the 3.3V logic line to 0 volts (see later on counter argument).

However, you could make a case for the transistor working (albeit with reduced beta) in an upside-down mode (i.e. collector and emitter swap places). This would naturally tend towards thinking about a pull-up on the 3V3 line. I'd rather use a MOSFET version: - 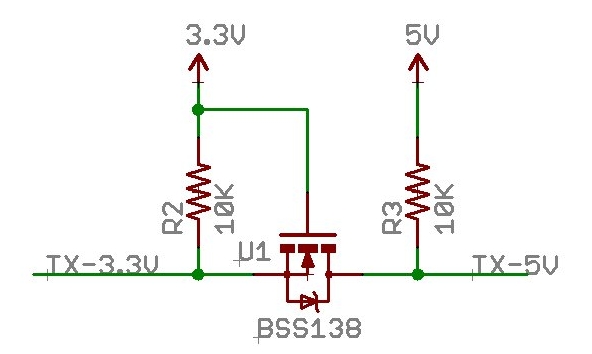 It's a little more clear cut on how the 5V side drags the 3V3 side down to 0V - it uses the body diode in the MOSFET to achieve this and therefore doesn't need a pull-down on the 3V3 side.

Not the answer you're looking for? Browse other questions tagged fpga servo level-shifting or ask your own question.

2
Interfacing HD44780 compatible LCD display and Spartan 3 FPGA
1
I2C level shifting to multiple voltages inside a BMS
0
Control of Dynamixel MX28R via RS485
2
Safe amount of current going into my device?
5
Why is there a short between my VCC and GND in this circuit?
0
Does an interrupt signal with 2.8 V high level need a level shifter for a 3.3 V microcontroller?
1
Interfacing with Low-Voltage ICM-20948 IMU chip