Yesterday somone helped me out a lot desinging a level shifter from 3.3V -> 5V. (here)

At first I thought I basically understand what he did, but the more I read up the more I think my understanding of transitors is wrong.

So if I understand this correctly you have current flowing from the base -> emitter. If it is enough current it will allow current flowing from the collector -> emitter in a certain proportion (the factor being beta on the fact sheet). At some point the transistor is saturated, meaning that the current from c->e will no longer proportinally increase but has reached it's maximum.

Now I have a few questions I just didn't find too much about. 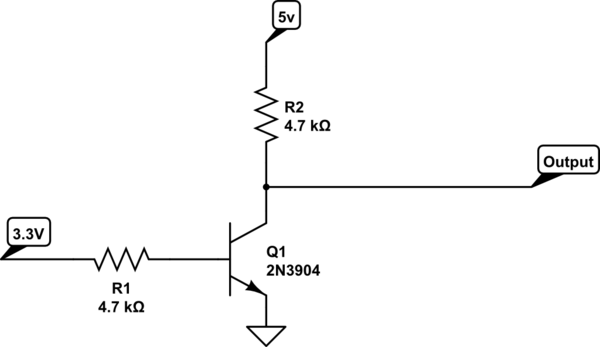 So if I understand this correctly you have current flowing from the base -> emitter. If it is enough current it will allow current flowing from the collector -> emitter in a certain proportion (the factor being beta on the fact sheet). At some point the transistor is saturated, meaning that the current from c->e will no longer proportinally increase but has reached it's maximum.

Does a saturated transistor have resistance on the C->E route?

yes. That's its "on resistance". It's typically small, but cannot be zero for anything that is not a superconductor! Typical values range from milliohms to Ohms.

In this schematic, why is 5V -> R2 -> Output not a working circuit in itself? Are digital inputs not grounded?

Whether these outputs have "pull down" or "pull up" resistors or are "high-z" (ie. "floating") depends on the output.

However, you're right, when the Collector-Emitter resisitivity is very high (i.e. no base current is flowing), then this circuit will emit a "high" signal. For many microcontroller buses, a "high by default" is right. For others, it isn't.

Why connect the Output to the collector and not the emitter? (emitter -> emitting something (current/signal)?)

The emitter in your circuit is constantly at ground level, and there's nothing to change that. So there'd nothing you'd do when feeding current into the base.

If Q1 is saturated and R2 is the only resistor in the cuircit (assuming transisors really dont have resistance) wouln't R2 cause a 5V Voltagedrop, meaning there is no more Voltage (or less if there is stuff happening with the current at the output, I think that would be a voltage divider) at the output?

Typically, the voltage you're looking at is the "base-emitter voltage in on state". It's typically a diode's forward voltage – something like 0.7 V or 0.2 V or so, depending on the transistor and the base current – see \$U_\text{BE}\$ in the datasheet.

What would the Voltage be at E in this schematic?

Strange question. Your transistor's emitter is tied to ground – so it's a constant 0V.

3) Collector has V gain , Emitter out does not. TTL and CMOS have push-pull drivers. Thus logic stages are inverters and some are buffered ( =3 stages, non-inv=2 stages)

10
Why can't you go sticking a voltage across the base-emitter terminals in a transistor?
4
Transistors why does increasing base current increase collector current?
0
Question about the current flow and voltages in a simple NAND diagram
0
Transistor power dissipation, current, and voltage
0
Swinging of Output Current from voltage controlled current source
0
Semiconductors: Transistor characteristics
1
Requirements for NPN, PNP transistors