Connecting two electromagnets against each other to study self-inductance

In one article explaining the self conductance a figure like this was used: 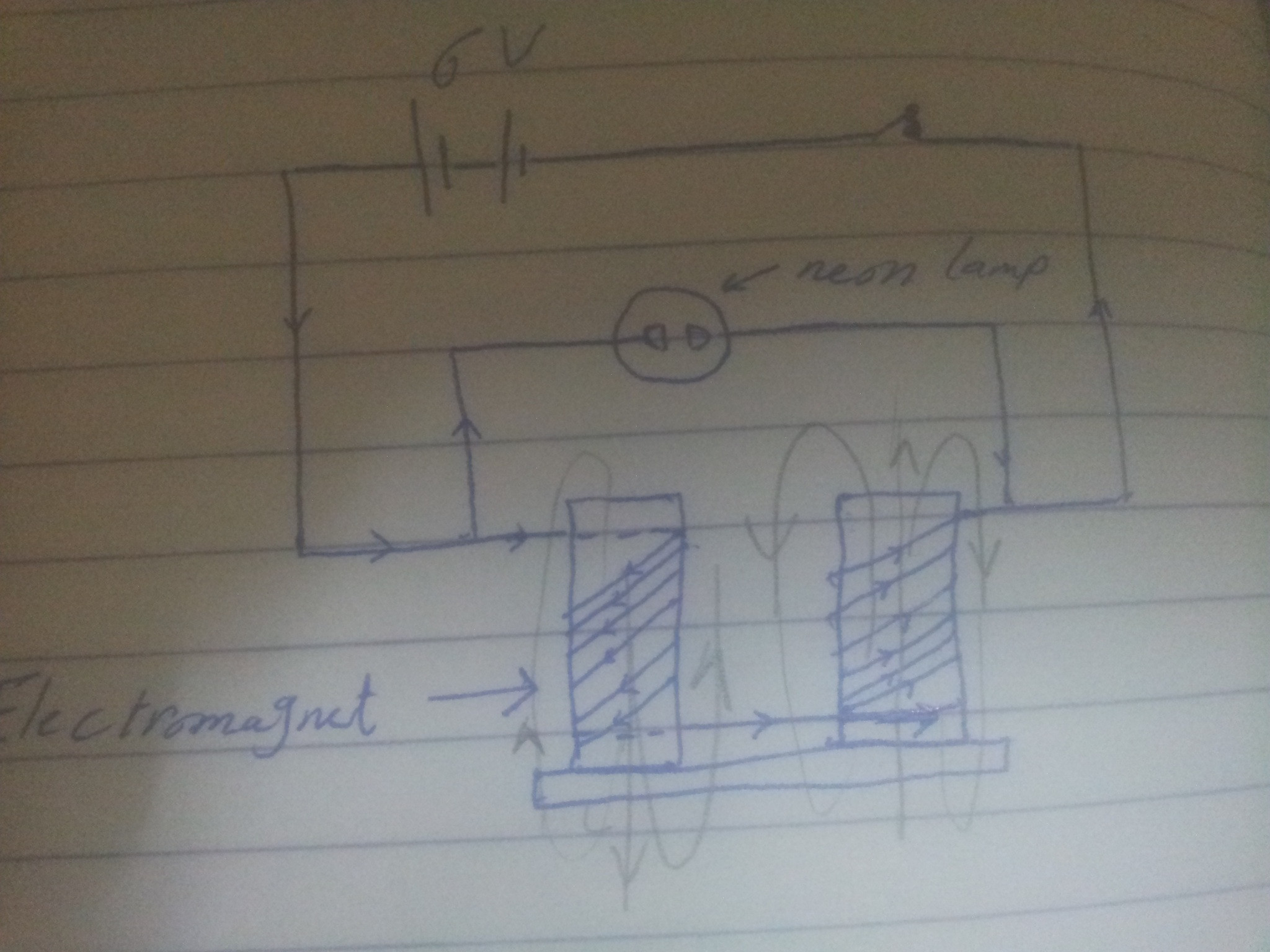 I added the field lines by myself, what I have noticed in it is the way the two electromagnets are connected by, and I asked myself why they are not connected like this: 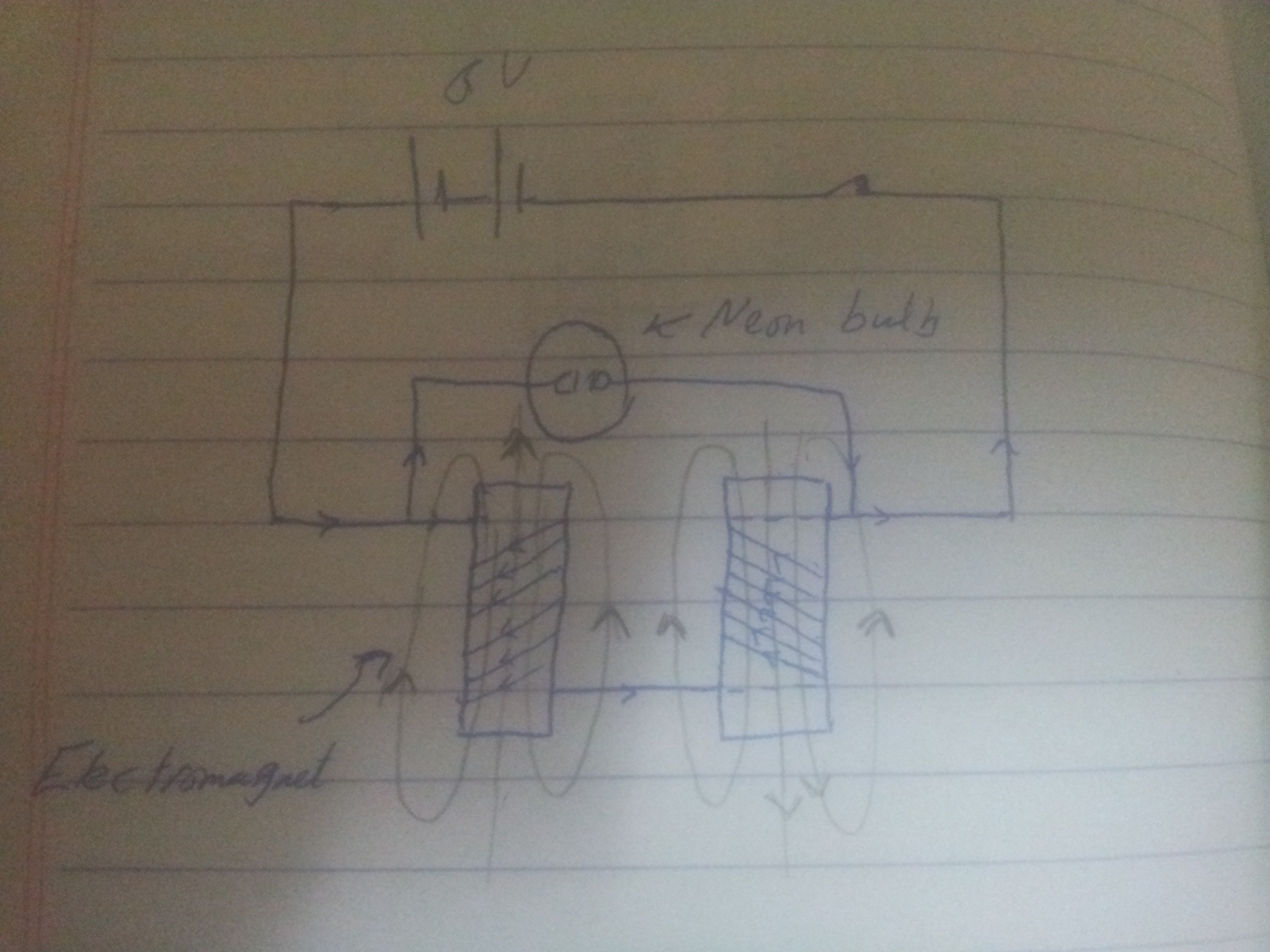 I mean to make the wire coming from the left electromagnet pass behind the core of the right electromagnet, and then the field direction would change. I, to some extent, understand self-inductance, and I wonder if connecting them as in figure 1 is only the right thing to have an induced emf, could you please help me understand the self inductance in this case, and to tell me whether the two connections are right? Notes: Neon lamp in the circuit is put to prove that a high induced emf will be produced, because that lamp needs 180V, and the battery is only 6V, so the Neon lamp would glow when there is an induced emf.

The coils in a 'U' shaped electromagnet are equivalent to a single coil, because they are magnetically coupled via the connecting bar at the bottom. The bar is made of a high permeability ferromagnetic material such as iron or steel. This provides an easy path for the magnetic flux to get from the end of one coil to the start of other, and (combined with the magnetic cores the coils are wound over) reduces the external magnetic field around them.

So even though the external fields in your first drawing are going in different directions and so should be cancelling each other (reducing the total inductance) this effect is swamped by the better flux coupling through the bar. If you imagine bending the bar 180º so the two coils are in line, you will see that the winding continues in the same direction in both coils. As result the total inductance is doubled (compared to two independent coils which are not magnetically coupled) because the flux produced by each coil also goes through the other. This effect is called mutual inductance.

In your second drawing there is no connecting bar, so you simply have two independent electromagnets wired in series. Since these are wound in opposite directions, if placed beside each other their external magnetic fields will add and increase the total inductance - but only by a small amount because each coil's inductance is dominated by its strong internal flux, and the permeability of air is low so external flux coupling is weak and drops off rapidly with distance.

Not the answer you're looking for? Browse other questions tagged power-electronics induction self-induction or ask your own question.

1
How Armature reaction is different from Self inductance?
1
A problem regarding connecting the grounds within two seperate circuits
0
What makes the self-inductance in a series LR circuit to fail stopping current forever?
0
DC Power supply, current and voltage are independent of each other?
0
Self-inductance of toroid of rectangular cross section (N=windings?)
6
If you have two identical but oppositely wound inductors does the inductance effectively cancel?
0
Why sometimes some PCB designer add extra traces to connect two pin to each other?
1
Is there a dual row edge connector that is connected a the edge of the PCB, with one row connecting to top side, the other to bot side?
1
Why does the self-inductance of a straight wire decrease when its radius increase?