Why does antenna length have to be at wavelength

Resonance occurs when capacitive and inductive reactances overcome each other. Thus is the familiar resonance frequency equation:

As the frequency gets lower, the antenna gets longer. But if this is only for making the antenna resonant with the selected frequency, why do we not simply add more capacitance (some metal balls or some conductor with volume) to the ends of a shorter wire to make it resonant with a low frequency instead of making it 6 meters long? Like this:

In many situations you have to use capacitors and/ or inductors to reach the goals you have set. For instance if you want to create a multi band antenna. This kind of antenna is in frequent use with radio amateurs.

The picture shows you a multi band antenna where resonance has been reached by introducing tuning elements. 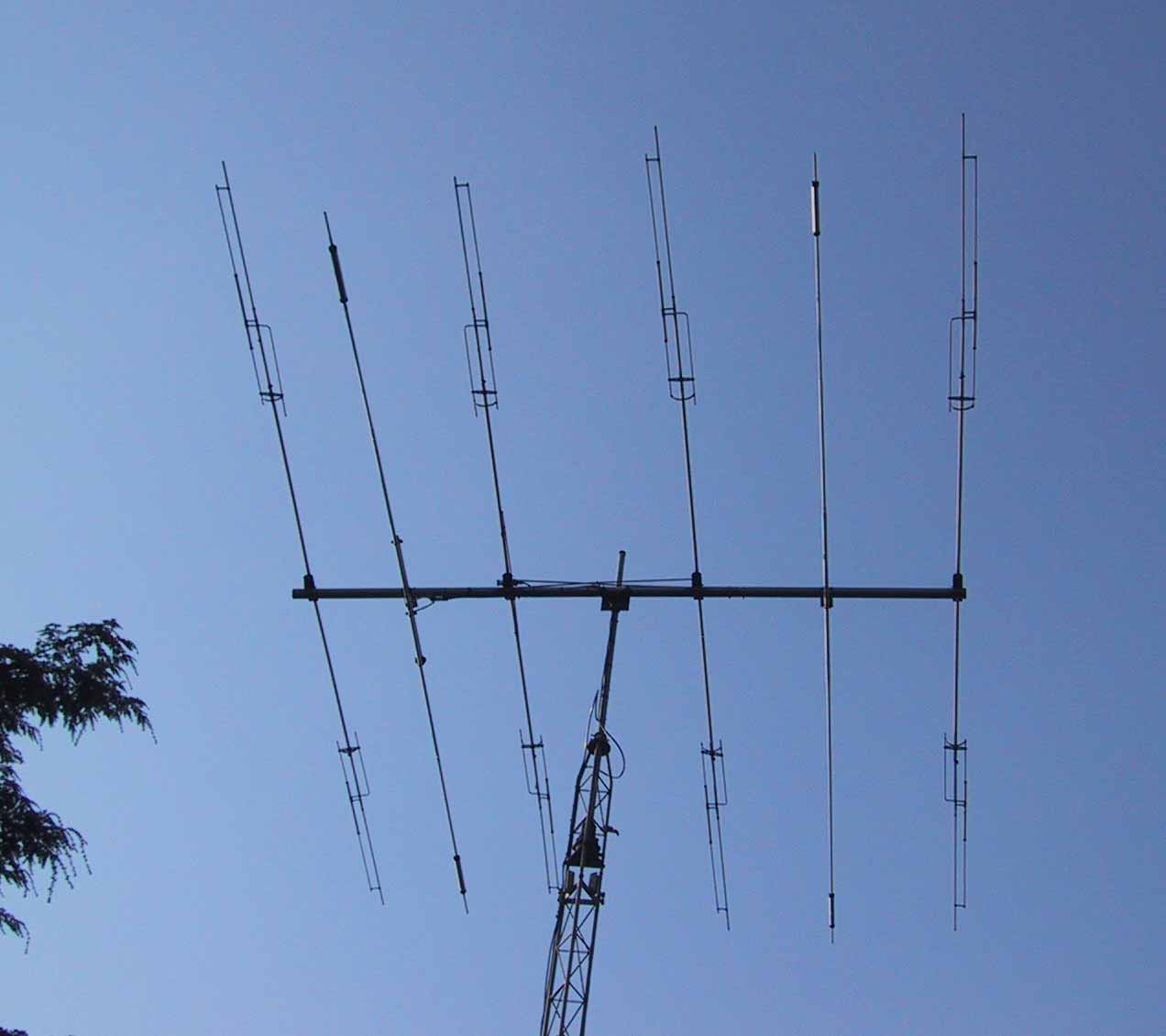 To make the antenna efficient at radiating energy into space (or receiving energy from space), the key trick is to make use of standing waves. The shortest standing wave you can get is at half the wavelength, and relatively easy to feed in the center of the dipole. Full wave is also possible, but more difficult to "feed" by a cable if memory serves (which is where you get into practical aspects, such as feedline impedance matching = optimum energy coupling). Actually quarter-wave stubs are also possible and "resonant", but need to be fed at one end by a unipolar/single-ended transmission line... and the impedance match is not very good, AFAICT. You can indeed make the antenna shorter - this is typically done by putting a coil at the base of what was originally a quarter-wave stub. This is typical for short-wave radioes (CB comes to mind) or vehicle-mounted FM radio antennas etc. Note that by making the antenna physically smaller, you decrease its effective reception area, meaning that it "collects less energy" = has lower gain. Which results in worse SNR in the radio input. For the sexy small size, you have to give up some gain.

I'd like to point out one difference in the resonant properties, between a "lumped component" LC resonator and a "standing wave" type resonant dipole or cavity: if observed across the whole spectrum, an LC resonator has a single peak at the resonant frequency, but a "standing wave" type resonator actually has multiple peaks and notches, spread across the whole spectrum. And, if memory serves, the standing-wave notches are generally sharper than the peaks (at least my simulations in QUCS used to suggest that.)

Resonance occurs when capacitive and inductive reactances overcome each other.

This applies to tuned circuits but NOT antennas - for an antenna to be a good EM emitter it has to keep the balance between the fields in the correct proportion.

As the frequency gets lower, the antenna gets longer. But if this is only for making the antenna resonant with the selected frequency

No, it's to keep the magnetic and electric fields in the correct ratio and you can't disturb this ratio by trying to compensate the lack of magnetic field produced (because the antenna is "short") by making the electric field greater - that just doesn't work.

Not the answer you're looking for? Browse other questions tagged frequency antenna resonance or ask your own question.

16
How does a Theremin “antenna” work?
2
Difference between antenna resistance and impedance
3
Can 900MHz and 2.45GHz Antennas be differentiated by shape?
0
Is there any possible low-frequency electrical resonance can be caused in a power grid?
0
Using an Induction Heater to melt multiple types of metal
1
Shortening a long antenna with a capacitance