Injection of EMI to input pins of op-amp in LTspice

In order to observe variation in output from op-amp due to electromagnetic interference I need to inject EMI signal at the input of a CMOS op-amp.I am trying to do an LTspice simulation on this. Can a voltage source be used for this? Is there any other way to simulate EMI noise in LTspice?

If you want to simulate a EMI injection in spice, develop a circuit equivalent of what your trying to model. EMI can couple into signals via inductance or capacitance. If its a magnetic field then use inductive coupling, if its an electric field, then use capacitive coupling. Or a combination of both might be needed. Here is an image from electronic.nu that shows both methods. 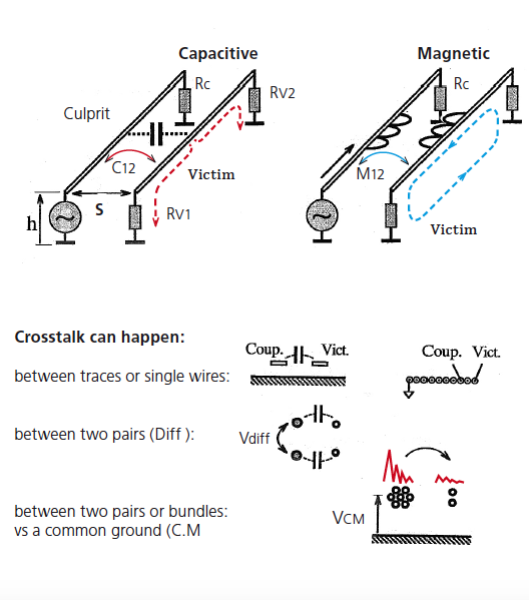 Mutual inductance is between two different wires, loops or coils. A wire on a PCB can pick up EMI, first you need to find the EMI source and model the coupling between the two conductors. There are PCB trace calculators to do this. A harder way is calculating the magnetic field impinging on the trace but this is possible if you know what your source signal is.

A capacitivly coupled surface will also induce noise on a PCB trace. Mutual capacitance between traces on a PCB can be calculated. If its between two plates of metal you can use the capacitor equations.

Then you can plug the values for capacitors and\or inductors (if its mutual inductance you also need the K term to couple the inductors together in lt spice) and model it as a circuit. I will say this, upper bounding/lower bounding on equations for estimates goes a long way because in a lot of cases when calculating its hard to get an exact answer.

Not the answer you're looking for? Browse other questions tagged voltage noise simulation ltspice emc or ask your own question.