How does the glass screen of smart phones not block the discharge of capacitors in capacitive touch screens?

Glass is one of the best insulators when designing high voltage electronics, and correct me if I'm wrong, but capacitive touch screens work by measuring the charge of capacitors in a grid on the screens surface. The capacitors of a lower charge are closer to the point where someone is touching the screen. So, how does the glass on the surface of the screen not block the discharge of the capacitors into its human conductor? Is there some special type of glass used in these displays which has lower insulating properties than typical glass?

Short answer: the glass is part of the capacitor.

A capacitor is at it's most basic level two conductors with an insulator in between them. Capacitance is everywhere, all objects in the world will have some level of capacitive coupling between them.

This increase in capacitance is what the touchscreen detects. 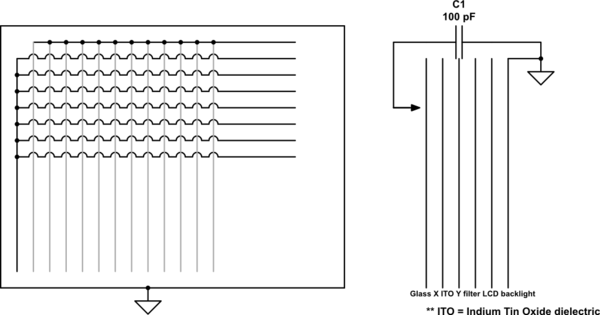 This is a 2 dimensional concept drawing of a 3 dimensional XY scanned capacitor grid for delta C changes resulting in xx mV changes of signal with the 100pF fingertip extended from a body of tens of thousands of body capacitance in series with picofarad series XY sensitivity.

Not the answer you're looking for? Browse other questions tagged display touchscreen capacitive or ask your own question.