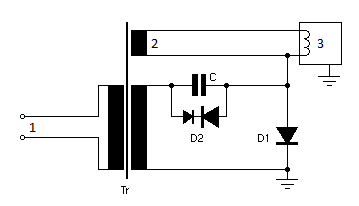 has D1 which is a diode, and then D2 which I believe is another diode. I think that the diodes are there to simply act like a flood gate type thing where they are controlling and making sure the circuit does short circuit. Which would be the purpose of D1, but D2, I don't have an educated guess on it. What would their function be in this circuit?

That's the schematic of a microwave oven. 3 is the magnetron tube. It's anode is tied to GND. That's one of the rare cases where GND has a positive potential against other parts of the circuit. The mounting inside the oven is much simpler that way.

Because a magnetron tube is a diode itself, the circuit needs the antiparallel diode D1. A transformer has to deliver AC, it would saturate if there was a DC component. Instead of using a rectifier bridge, and instead of throwing away the energy of one half wave, the circuit also acts as a voltage-doubler. That's the purpose of C, which is a series resonator together with the secondary main winding of Tr. The purpose of D2 is limiting the voltage over C to avoid C fail miserably (it could explode on overvoltage.)

Not the answer you're looking for? Browse other questions tagged diodes circuit-design or ask your own question.

0
Make a zener diode out of a MOSFET
2
Controlling the current through a Diode Bridge VCF
1
Reversed biased diode polarity in circuit
20
Lowest voltage drop diode possible
15
Differences between TVS diode and Zener diodes, in diagrams and in practice?
2
Diode transistor circuit logic
1
Equivalent ideal diode circuit analysis
0
What happens if the Forward voltage of a diode is not met?
0
I don't understand why this open collector not gate needs diodes