Can I use electrolytic capacitors in an oscillator?

I'm trying to learn about oscillators so I thought I'd put together something like one of the colpitts oscillator circuits I've seen and play around with it. I'm pulling scavanged parts from my junk box and realized As far as matched pairs, I have almost entirely electrolytic capacitors. Is it even possible to use these to build an oscillator since they are polarized?

If I can and orientation matters, how would I orient the cathode and anode? Are there other things I should consider?

Please excuse what I'm sure is a simple question.

Yes, you can use electrlytics in a Colpitts.

A Colpitts oscillator has places where you can use polarised capacitors, and for the places that experience bipolar operation, you can use two in series with a Mohm bias resistor to the centre point to a high voltage to keep them both properly biassed.

Use the choke from a flourescent fitting as the inductor, and you might get operation way down in the low audio. I don't normally recommend mains transformers as inductors, and certainly they don't ever make good power inductors, but here they would be a good source of large low frequency inductance. Excellent learning opportunity. Stability, tolerance, Q, suitable values, well, there's a reason electrolytics don't get used much.

You will probably find it won't work with a small inductor and big capacitor. The sqrt(L/C) gives you an impedance. Any given design of sustaining amplifier will only work well over a range of tank impedances. Too low an impedance and the active device gets excessively loaded, and the losses in the components drop the Q values too low to resonate. Keep the impedance up with a large inductor. That's part of the learning, but unfortunately an oscillator that just 'doesn't go' can be a bit of an enthusiasm damper.

I will agree with the comments that if you just want a quickly working low frequency oscillator, then go RC. If you want to learn, then find a big inductor to go with the big caps.

Following Neil's answer, yes you can do that, but you usually won't.

As said, it's necessary not to build an LC oscillator with vastly differently sized reactive and capacitive elements, and finding an inductor in the same order of magnitude will be a bit expensive (if you can't scavenge one from something else).

Also: If you want an oscillator, you're often actually interested in an exact, stable frequency oscillation.

Now, most electrolytic capacitors are actually sold with a 20% value tolerance. That's not a great start to hit an exact frequency. You say you've got matched pairs – but are these really matched, or do they just carry the same specification?

Also, electrolytics are usually mainly used as relatively long-term, large value "energy storage" in the power supply of loads. As such, they're optimized for high capacity density, but not for low equivalent series resistance, so instead of this typical Colpitts 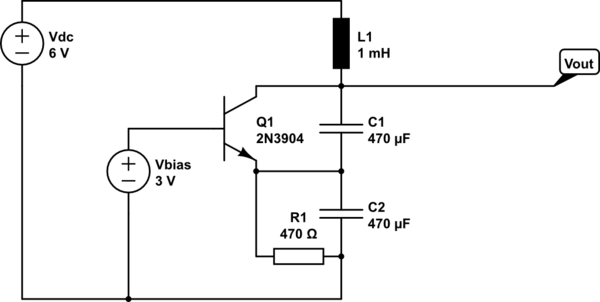 You'd have to consider the circuit including the parasitic series resistances; and also, electrolytics capacitors aren't totally flat over all frequencies, so if you don't operate at low frequencies, subtract a few percents from the nominal capacity value: 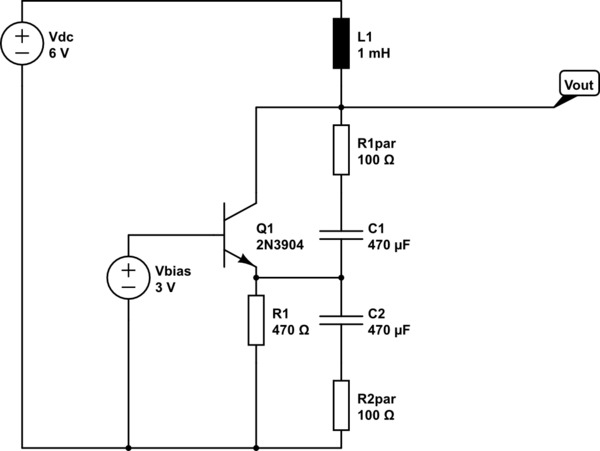 Suddenly, your oscillator is dampened, and the the fact that there's voltage drops over R1par and R2par means that the transistor isn't quite working at the same Uce, which also means the amount of energy stored per oscillation will change. This makes stable operation a bit tricky.

Regarding Polarization/Orientation: as usual, make sure the caps are oriented the same way as the biasing.

Not the answer you're looking for? Browse other questions tagged capacitor oscillator electrolytic-capacitor or ask your own question.