How to Derive Capacitive- and Inductive Reactance Formula

I've been searching around the internet to find out how to derive the reactance formula for capacitors and inductors. But I couldn't really find anything, so I thought why not make a post about it.

Thank you in advance, Mr.Mongoloid

The phasor approach is the easiest imo. You simply let V and I become a phasor. Then you replace all of the differential operators by algebraic expressions. Ive done the capacitor for you . 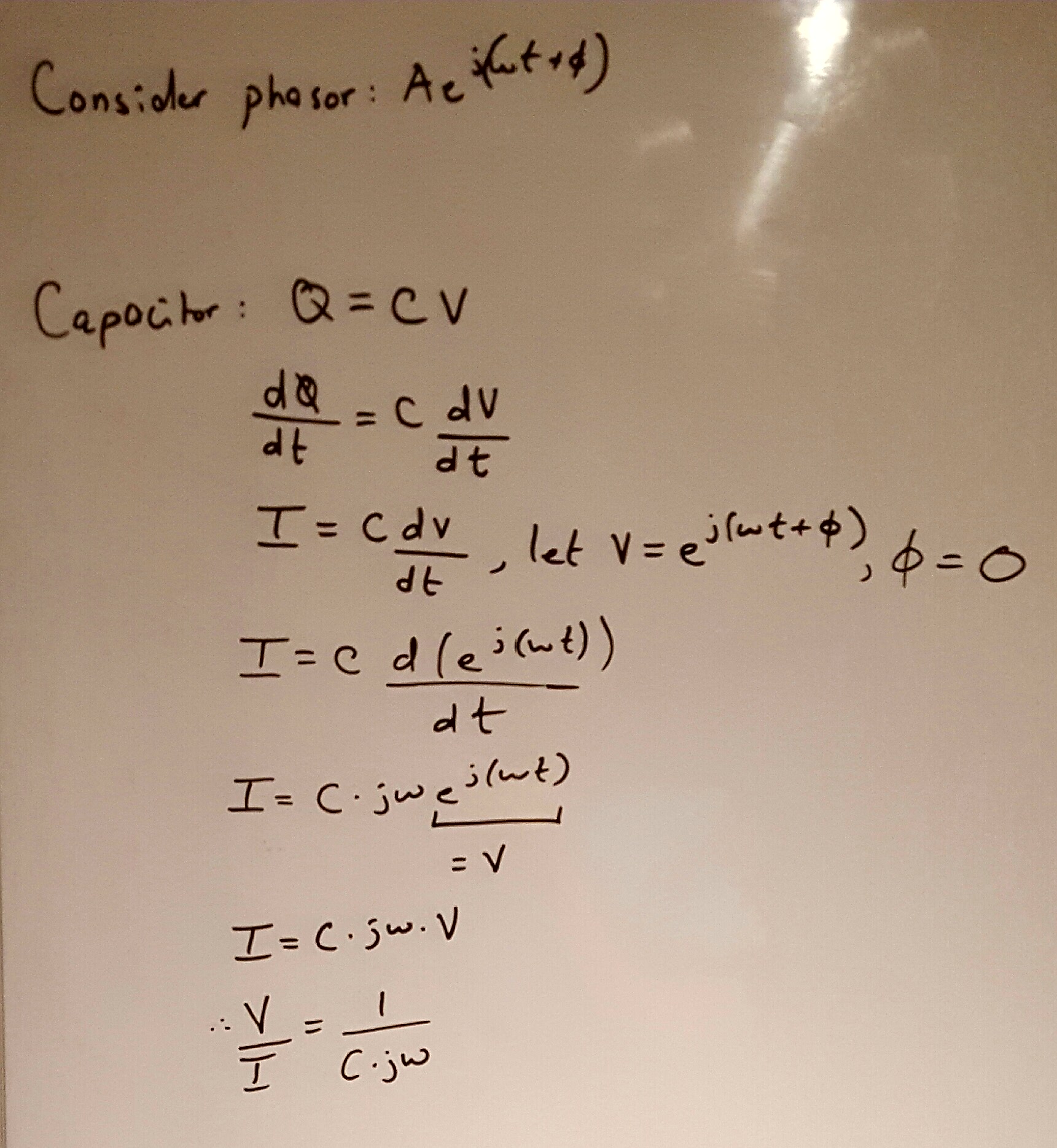 Note: in this form do not forget that both I and V are now phasors and V/I is a complex number ofcourse.

Edit: you can notice i made the phase phi = 0. I did this to make things clear, but its value makes no difference. When you take dV/dt the phase phi is never part of that expression anyways...

I'm currently reading The Art of Electronics and had some real trouble understanding the derivation for the impedance of a capacitor \$\boldsymbol Z_C\$ at a frequency \$\omega\$ in section 1.7.4. I finally figured it out so I figured I'd add it here.

The text starts out with a sinusoidal voltage:

We can then notice from Euler's formula \$re^{j\theta}=r\cos\theta + jr\sin \theta\$ that our function \$V(t)\$ is the real part of the left hand side:

Now, this is where I got thrown for a bit of a loop. The trick to finding the impedance is to consider Ohm's law: \$V = IZ\$. We want to rewrite the above equation so it's in the form:

I'm obviously still a beginner so I would appreciate it if anybody could point out any errors here, but it seems to match up with the text pretty well.

The equation I grew up with is this :

If this is the equation you are trying to derive, forget it... this equation is not ( in math terms ) "rigorously correct", it is actually a crude "rule of thumb", which has some built-in assumptions that are NEVER identified, anywhere. You were on the right track but didn't go far enough... The term SIN wt / COS wt can be re-written as TAN wt, which evaluates to a quantity that varies from +infinity to -infinity, twice during each cycle.

The equation you created actually expresses the INSTANTANEOUS RESISTANCE of a capacitor, driven with a sine wave. ( = instantaneous voltage across the capacitor, divided by instantaneous current flowing through the capacitor ) The fact that this value ( I will call it Rc ) varies from +infinity to -infinity... twice during each cycle... is actually 100% correct.

( repeating, this all assumes the driving waveform is a sine wave... and ONLY a sine wave )

The fact that the Rc value is totally "wild" and varies from +infinity to -infinity... twice... during each cycle... means the "resistance" of a capacitor driven with a sine wave DOES NOT HAVE A SPECIFIC VALUE THAT CAN BE IDENTIFIED OR USED IN ANY CIRCUIT CALCULATIONS. Stated differently, the concept of RESISTANCE as an expression of the voltage / current ratio in a capacitor ( driven with a sine wave ) IS USELESS.

That is why the voltage / current ratio of a capacitor is NEVER identified with the word RESISTANCE... instead, a NEW quantity is "invented" which is similar, and much more useful... called REACTANCE, which is also expressed in Ohms.

Reactance is defined as the RATIO of MAXIMUM VOLTAGE to MAXIMUM CURRENT, within each ( applied ) sine wave cycle... For a capacitor, maximum VOLTAGE occurs at w = +1/4 cycle, when SIN(w) = +1, and maximum current occurs at w = +0/4 cycle, when COS(w) = +1. Substituting these constants back into your equation will yield the well-known ( basic algebra ) equation for capacitive reactance...

So... that equation is NOT TRUE at every instant in time... it expresses the ratio of MAX voltage to MAX current, but it ignores the fact that these two maxima do NOT occur simultaneously.... and there is nothing in the equation to even "hint" that this ( unethical ) "trick" is being done... that explains A LOT...

That's why summing together ( plain algebra ) values of R and X must be done with vector addition, instead of algebraic addition... the vectors take the "timing differences" into account when the sum is done... algebraic sums can't do that.

You will never, ever see an explanation like this anywhere in a text book because no-one wants to take the time to explain all this stuff... because it's basically a big mess that everyone wishes would just go away... and it does go away, if you use higher math... but "mere mortals" must muddle through life with plain old algebra, and it just won't do the job properly, in this case.

Not the answer you're looking for? Browse other questions tagged ac capacitance inductance reactance formula-derivation or ask your own question.

0
Why does impedance decrease in an MLCC as frequency increases?

0
Capacitive reactance
0
How to calculate inductive and capacitive reactance?
0
Calculating true power of a predominantly inductive load?
0
Why is phase of current assumed to be 0 when deriving formula for instantaneous power in an AC circuit
4
Phasor to Rectangular Confusion
0
What is reactive energy?
2
LC in parallel with R circuit resonance
0
Find RL circuit average power when no AC amplitude is given