Why AC supply is rectified first before stepping voltage down?

I have opened one of my phone chargers and was trying to understand how it works.. I found IC MB6F just at AC input which came out to be a bridge rectifier. 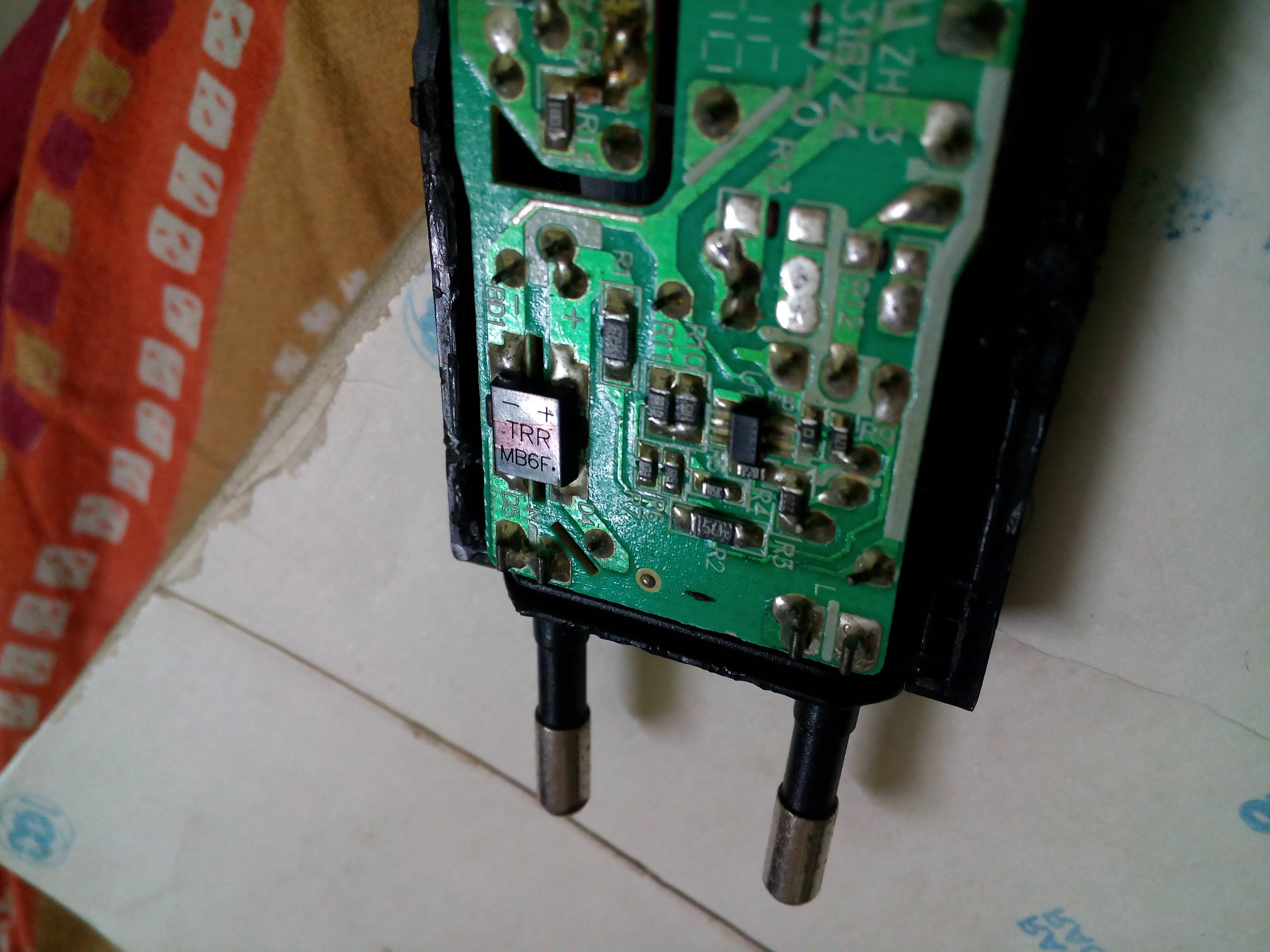 The volume for a core, needed to support the Webers, is this:

\$l_e\$ is the required magnetic path length and \$A_c\$ is the core cross section area. In the case of a sine wave, the last factor above, for one half-cycle of applied voltage, is:

Suppose I wanted \$10\:\textrm{W}\$. Then \$I_{peak}\approx 120\:\textrm{mA}\$. The flux density of iron cores probably shouldn't exceed about 1.5 Tesla (though we could look at various materials and come up with a range of numbers here.) \$\mu_r\approx 1000\$ for iron. So this suggests about \$60\:\textrm{cm}^3\$ of volume for the core -- or in the area of about 1 pound of weight. This is about twice the weight that is used as a rough guide for power transformers, but it is in the right ballpark. (Using another figure I've seen for CRGO steel, 1.9 Tesla, the weight drops down into the normal expectation range.)

Note that high permeability doesn't help you in the least. Look up at the equation above. That term, \$\mu_r\$, is in the numerator! If you increase it, all you do is increase the needed volume. The reason is that you need vacuum to store energy. Not matter. So more permeability simply means less effective vacuum space in the solid matter lattice and so you just need more matter in there. High permeability here is about containing the flux lines and providing good magnetic coupling. The inductance comes along for the ride, too.

When I was a kid, my father used to teach me a couple simple "rule of thumb" formulae of iron-core transformer design. 45/s turns per Volt, and P = s^2, where s = square of the EI iron core's central column in cm^2. I.e. the available electric power grows with the fourth power of the core's "thickness" :-) And, note that tiny wattages have you end up with extremely high turn counts of pretty fine wire... lots of series resistance.

My naive understanding is, that in order for the transformer not to suck/waste power when unloaded / open-ended, you need the transformer to have a certain high-enough inductance for a given primary voltage (measured with an open-ended secondary). Again for small cores, this translates into high turn counts of fine wire.

If tiny iron-core transformers were more efficient than similar-wattage switchers, legal regulations on stand-by power consumption in consumer electronics would make the iron-core stuff omnipresent. The reality is, that only switchers can be made with a good enough efficiency in the tiny form factors (with next to zero idle power consumption).

This is not to say that all switchers are elegant, stabilized and efficient. For instance, some of the super-sexy tiny and light Nokia chargers (ex works standard accessory) contained the most minimalistic switcher I've ever seen: a self-oscillating three-legged "transistor" in the primary, cheap elyts, no filtering, no feedback! Unsurprisingly, those chargers are energetically inefficient, regulation under load is very poor (compared to a similar wattage tiny iron-core trafo) and I didn't really check the EMI.

Some cheap slightly bigger wall warts (switchers) already have a proper feedback (via an optocoupler) and some minimal filtering, but are pretty inefficient (get hot). Same thing with aftermarket noname notebook adaptors.

I've recently been amazed at the current-generation Lenovo notebook adaptors (with the rectangular yellow plug). This small "plastic brick" adaptor runs perfectly cool! Amazing, compared to some notebook adaptors I had in the past. I would hazard a guess at modern TrenchFET/FinFET transistors and sync rectification at the secondary side.

But usually you want your DC supply to be regulated. (Unregulated supplies tend to have a large ripple, which causes problems for many circuits.) So you need a regulator at the end no matter what. For safety reasons, you also usually need a transformer somewhere.

The schematic I drew above is a perfectly valid way to do things. You could put a linear regulator or a buck converter on the end and get regulated DC. But (as others have said) 60 Hz transformers are big and heavy. And even if you don't need a transformer for safety, it's hard to reliably convert a very high input voltage down to a very low output voltage. These limitations lead to the so-called off-line converters, which rectify the mains first, then switch the primary side of a small transformer at a high frequency. The secondary side is still isolated, and the transformer does some of the voltage conversion, which keeps the switch's duty cycle in a reasonable range. Of course, off-line converters are more difficult to design than the simpler kind I showed above.

Not the answer you're looking for? Browse other questions tagged switch-mode-power-supply charger rectifier ac-dc bridge-rectifier or ask your own question.