How does the CMRR of a fully differential amplifier change with input impedance imbalance?

Most pro-audio microphones provide a balanced output -- this is intended to provide improved noise rejection, and provided the output and line impedances are appropriately balanced, it does. However, with conventional differential-to-single-ended conversion stages, source and line impedance imbalances degrade the noise rejection ability of the system. Transformers don't suffer from this, but have problems of their own (magnetic coupling, size/weight, low frequency response), so the Whitlock bootstrapped topology has come into use for differential-to-single-ended conversion, at least at line levels: 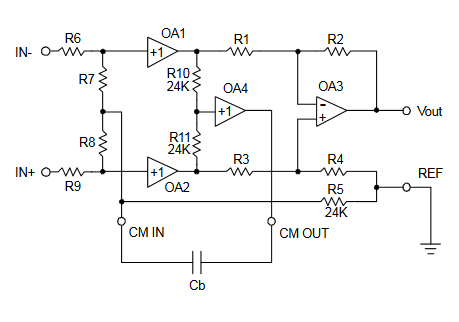 No, this would not work. The Whitlock amplifier works by bootstrapping the common-mode input impedance so that it is very high, so that the voltage divider effect from the source impedances becomes negligible, and therefore so do the effects of any imbalance in those source impedances.

Your fully-differential amplifier is essentially acting as a buffer amplifier, hiding the source and load impedances from each other, so all the Whitlock amplifier can do is make impedance imbalances of the diff amp negligible.

The source imbalance will only see the diff amp's input impedance, and if that is not extremely high, it will cause a voltage imbalance coming out of this stage.

Not the answer you're looking for? Browse other questions tagged impedance differential common-mode balanced or ask your own question.