I'm building this circuit from an old schematic for a stroboscope (spins a disk with patterns on it and strobes a light based on input frequency). I've already built the frequency divider (it is extremely cool ripple counter with clock chopper feedback that calculates a 1/(2^n) equation), and the input strobe circuit (converts an audio signal to a square wave). I'm stuck on the motor circuit.

I believe it is controlling the speed of a 50V AC motor via frequency because the input on the lower left NPN is a 50% duty cycle square wave that varies from 30-90 Hz. 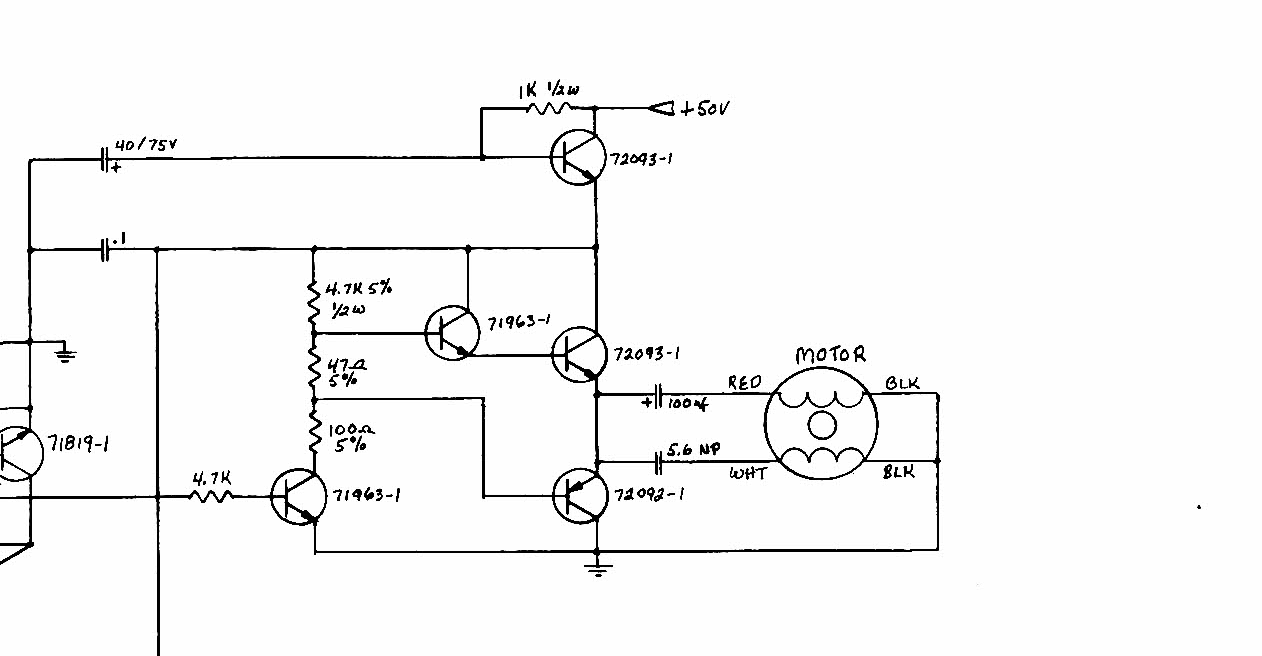 There's 50V DC supply on top there, and the input signal is 5V (through the 4K7 on the lower left). The transistors stacked below the 50V are all listed as generic high Vce devices, and the 71963-1 devices are just generic NPNs. I have no info on the motor, other than I assume it is a two pole 50V AC motor.

Three things about the circuit confuse me.

2) I understand the need for a Darlington array to drive the high voltage and current, but why the PNP on the bottom? (Is it to pull to ground faster b/c of the current in the coils?)

3) Why would the cap values into the windings be so different (100n & 5u6)? Is it something specific to the SKU of motors they had made for the device, or is there some other standard trick here that I don't get? (note: the text on the lower cap says 5.6 NP, not NF, I assume that means non-polarized?)

Thanks in advance, I know it's a lot of Q's but searching for "basic analog circuit analysis" on google brings up much crap.

This illustrates the need for schematics with a) reference designators on them and b) drawn 'conventionally' with positive to the top and ground to the bottom with c) related components close together telling the story of their connection.

1) R'that 1k one tied to 50v at the top' is not just connected to 50v and TR'the transistor at top right', it's also connected to C'that capacitor at top left that also goes to ground'. Had the C been drawn vertically, under the resistor and transistor in question, and its ground connection been directly under the vertical cap, the function would have been a lot more obvious.

This is a fairly standard power supply line cleaner, when the output voltage isn't critical, but the voltage drop across it should not be too big, an RC filter driving an emitter follower. The hfe of the transistor amplifies the current through the R, allowing the RC to have a much longer time constant than would be possible without the transistor.

Quite why this function needs a supply filter is not apparent, but that's what's drawn.

2a) Why is the pullup a Darlington pair, where the pulldown is a single device? Like the line cleaner, that's also a little puzzling. Conventionally in audio amplifiers, you would use a Darlington pair for both pullup and down, as it then needs only light current to drive and is symmetrical. However, the NPN driving the output transistors has current gain, so maybe the designer felt that it was enough to actively drive the PNP down, where the pullups were only being turned on by the top 4.7k resistor. It is probably adequate, saves a transistor over the more conventional arrangement, and has lower dissipation than making the 4.7k pullup resistor lower to pull a single NPN up harder. It's not intended to be a low distortion audio output stage anyway, that 47ohm resistor does not bias the output transistors for low crossover distortion, the motor will not care.

3) Where a two-winding induction motor is driven from a single phase, it's common to drive one winding directly, and one from a capacitor, or both from different value capacitors, as this provides a different phase shift for each winding to create a rotating field inside the motor. Without the rotating field, the motor won't develop any torque at standstill, so won't start.

I suspect the 100x cap is 100uF, not 100nF. You'll notice it's polarised, so is an electrolytic. You don't get 100nF electrolytics, and 100n would not be much good at 10s of Hz. I suspect it's just 'big', and is there to offset the DC that's present on the push-pull output. The smaller 5.6uF cap provides the phase shift to the start winding. It may need to be non-polarised, as it probably can resonate with the winding inductance, which may create a reverse voltage on it at times. The 100uF cap will be non-resonant with its winding, and stay properly biassed.

Not the answer you're looking for? Browse other questions tagged motor ac analog darlington or ask your own question.

3
Why does BLDC Motor Spin Slower with Same Duty Cycle at Higher Frequencies?
1
Finiding composition of circuit from frequency response and bode plot
1
555 and output amplifer with different Vcc supplies
1
Why is the Tach output on computer fan referenced to the VCC?
1
Bias-tee for adding multiple frequencies to a DC line
2
How to decrease capacitance of PIN photodiode
1
Amplifying signal with Darlington not working
0
Best way to amplify 3.3V square wave at 1MHz to 10V square wave at 1MHz