Attack and Release times of the Automatic Gain Control

What is Attack and Release times of the AGC? I couldn't find any understandable pdf on this.

The objective of an automatic gain control is to manipulate its gain in order to keep the output RMS signal level roughly constant despite the input level RMS value changing significantly. To do this it "measures" the output signal level and this is quite often done by using a peak detector: -

The black trace is the peak detector output changing in response to the sudden presense of the blue signal.

So why doesn't the black trace move instantly to acquire the peak level of the blue signal (you might ask). Answer - if it moved instantly then there would be significant ripple created in the black signal and, as this black signal controls the gain, the gain would be rising and falling almost cyclically with the instantaneous value of the blue signal and this would produce an undesirable effect. Here is a picture I've drawn to show what a real peak detector signal would look like after filtering (orange): - 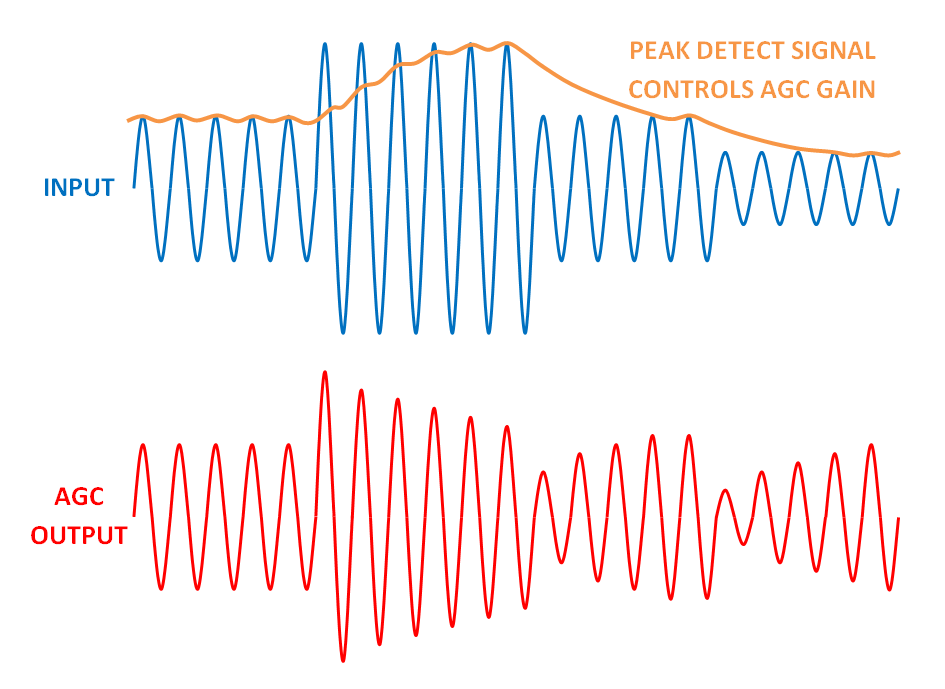 If you look closely at the orange trace there will still be some "ripple" in the peak detect signal and although this is somewhat undesirable, provided that the ripple is kept small it won't have a serious impact on the AGC output.

So, there has to be filtering involved and, of course, filters take time to settle but, they smooth out the cyclical changes because these are not desired when controlling the AGC gain. This means there is "attack" and "decay" and these are often called rise and release times.

AGC being Automatic Gain Control? They're the times it takes to ramp to a gain, rather than instantly jumping causing a discontinuity in the audio, it is ramped up and down smoothly. There's a good description here talking about dynamic range compression.

Not the answer you're looking for? Browse other questions tagged operational-amplifier audio timing-analysis or ask your own question.