I want to make a variable power supply with variable voltage and current.

Recently made a variable voltage supply using LM317 but I couldn't control the current so I want to try combining it with an LM317 current limiting circuit.

I want to use this as a lab bench power supply so I need to be able to vary the voltage and current with the potentiometers R2 and R1.

The image below is my circuit.

will it work? please feel free to point out any mistakes

The current limit potentiometer just isn't going to work - let's say you want to limit current to 1 amp; this requires a resistance of 1.25 ohms and the power rating of a 150th part of your potentiometer needs to be 1.25 watts. Given that pots have a linear power rating throughout the length of travel, the pot would need to be rated at 150 x 1.25 watts i.e. nearly 190 watts. Sure it will never see 190 watts but right at the end where you might want to limit current to 1 amp, that small fraction of pot track will see 1.25 watts thus the whole pot would need to be rated at 190 watts.

I would also recommend, that from each adjust pin to ground, you put a 10 uF capacitor to reduce the output noise of the rather ancient and noisy LM317 regulators. I'm assuming that you will also need fairly big heatsinks.

If you want a better design try this site called LEARNING ELECTRONICS. On that page they have a design for a fully adjustable power supply that uses an LM317 at the heart of it: - 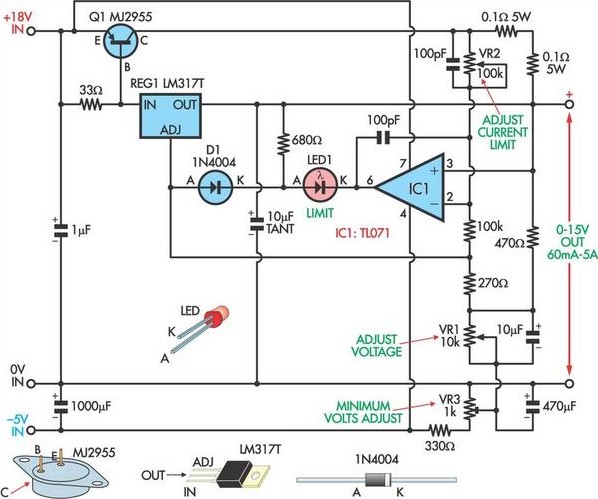 Conceptually correct. You can calculate the resistor power by \$P={I^2}*{R}\$ and the output current of that circuit is \$I=\frac{1.25}{R}\$. In other words, using the 150R resistor in your example, the output current is 8.3mA and the power is neglible 10mW so there's no need for a chunky resistor.. If you're really using a potentiometer, those usually have very modest power ratings so using a series resistor to limit the max current to some value may be advisable.

If you want a constant current source you don't need the voltage regulator provided the power supply voltage is reasonable.

Set Rf and R2 to your max output current and put potentiometer in series to reduce the current. Putting it in parallel with the R2 would also work. You may want a logarithmic potentiometer incidentally.

Connect the - input to regulator output and + input after the sense resistor.

Not the answer you're looking for? Browse other questions tagged power-supply voltage-regulator linear lm317 linear-regulator or ask your own question.