When/why would you use a Zener diode as a flywheel diode (on the coil of a relay)?

I have just been cogitating on the tutorial at http://www.electronics-tutorials.ws/io/io_5.html, and in the discussion of flywheel diodes it includes this sentence without further elaboration:

As well as using flywheel Diodes for protection of semiconductor components, other devices used for protection include RC Snubber Networks, Metal Oxide Varistors or MOV and Zener Diodes.

I can kind of see how an RC network might be needed if it is a large device and therefore the coil could be kicking back more current than you want to dissipate through a single diode. (Please correct me if that's not the reason.)

I don't have a clue what an MOV is so for the moment I'll ignore that one. :-)

I have read a bit about Zener diodes, but I don't understand why their lower reverse breakdown voltage might be desirable here?

Edit: I'm also puzzled by the following diagram from the tutorial above:

Wouldn't this take any flyback voltage and dump it into the Vcc net? Would it not be a better idea to have the relay coil be between TR1 and ground, and the diode dissipating the flyback voltage to ground?

The current from the relay opening doesn't go into the Vcc rail at all. It follows the path shown here: 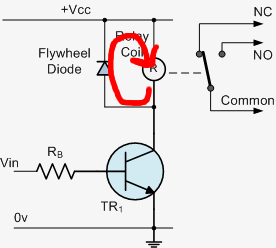 The stored energy is dissipated in the diode drop and the coil resistance of the relay.

In the Zener diode configuration, the stored energy is dissipated in the full Zener voltage of the diode. V*I is a lot higher power, so the current will fall faster and the relay might open a little faster: 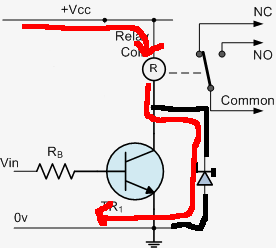 MOVs are different than Zeners, but fulfill a similar circuit function: They absorb energy when the voltage exceeds a certain level. They are used for overvoltage protection, not for precision things like voltage regulators.

The rate at which the magnetic field will collapse in a solenoid, electromagnet, or similar device when power is removed will be proportional to the voltage which is allowed to appear across the device. If one operates a 12-volt solenoid or relay with a push button and no flyback protection, releasing the button may cause hundreds or thousands of volts to appear across the coil until the field collapses; because of the large voltage on the coil, however, the field would collapse almost instantly.

Adding a simple catch diode will prevent any significant voltage from appearing on the solenoid or relay when it is released. It will also, however, cause the coil to remain magnetized for much longer than it otherwise would. If it would take 5ms for the magnetic field in a relay coil to reach full strength at 12 volts, it will take about 17 times that long, (i.e. 85ms) for it to dissipate through a catch diode. In some situations, that could be a problem. Adding some other circuitry to drop voltage can allow the coil to de-energize much faster.

BTW, if one is switching many 12V relays frequently, I would expect that one could save a fair amount of energy by having the clamp diodes charge a cap and then taking energy from that cap for some other purpose. I'm not sure whether or where that's done, but in something like a pinball machine it would seem like it might be a useful concept. 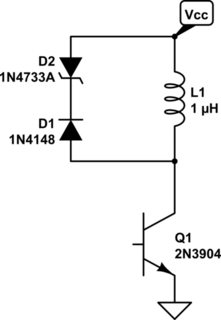 Some of these answers are confused about what happens with a simple diode. The energy is dissipated primarily in Rcoil, not in the diode.

Key is that when using a diode, the dissipation is an RL exponential decay (like RC). It is being exponential that makes it take so long (especially since release current might be only 20%). With a zener it is a linear drop to zero.

This simulates a real relay from its datasheet values of R and L.

You will notice that the ON (current rise) time is longer that the off time using a diode (L1,D1).

This is not correct as the inductance is greater (0.74H) when the relay armature is closed (better magnetic circuit) that when open (0.49H). The real On time (with 0.49H) and the off-time with a diode are almost the same.

L2,L4 currents are the same, as there is the same drop in both cases (and the same Vdrain on the fet.

Not the answer you're looking for? Browse other questions tagged relay diodes zener or ask your own question.

6
Why would you bypass a zener diode in the flyback protection of a relay coil?
25
Correct use of Flyback or Snubber diode across Motor or Transistor?
17
Can a Zener diode that protects a switch against inductance when the switch opens, affect turn on speed of the valve when you close it again?
14
Where should I put the kickback diode in a transistor switch?
1
How do I build a good power supply for a coil?
2
Arduino nano resetting after solenoid valve fires
1
Confusions with placing and sizing the flyback diode, TVS and Zener

25
Correct use of Flyback or Snubber diode across Motor or Transistor?
9
Zener Diode Selection for Relay
2
Is this alternative relay flyback diode path good enough?
0
Relay-Relay circuits: flywheel diode - yay or nay?
2
On a relay coil, why use an MOV instead of flyback diode?
2
Use zener diode as regular diode
0
Relay Driver with 24VDC Relay.... Zener diode?
2
For a Zener diode voltage regulator circuit: Why can't you place the resistor after the Zener diode?