I'm trying to make a zero cross detector. I used the schematic below as a reference.(schematic from http://microcontrollerslab.com/zero-crossing-detector-circuit-using-pic-microcontroller/) 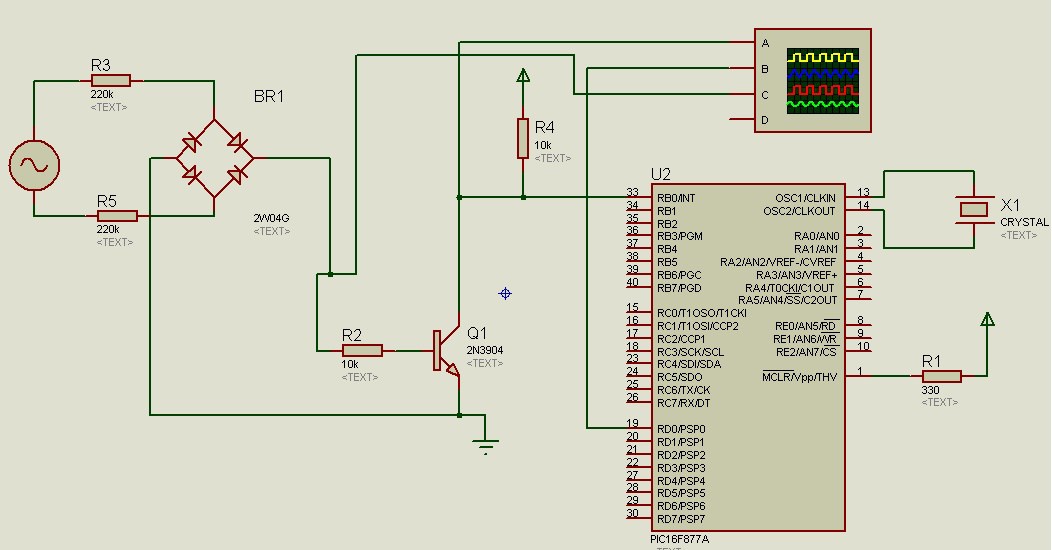 However if I hook up my scope then I get the following image:

You can see that ther is only 1 zero cross detected while there should be 2. Can someone explain why this happens?

When a 10kOhm resistor is applied at the output of the bridged rectifier:

Many thanks in advance.

The basic problem is that your AC source is not-isolated from ground. If it were then there would be no problem when you add the 10 kohm resistor that I recommended.

So, you have one incoming AC line close to earth potential and on the DC side of the bridge you are connecting one side down to earth and this turns the full wave rectifier into a half wave rectifier and you are just seeing the rectified positive half cycles when the non-earthed AC line rises positively.

This circuit only will work when there is galvanic isolation between input AC and earth. I would also recommend that you need isolation for safety reasons so, maybe use an opto-isolator solution. Here are a couple of ideas: -

The missing pulse is due to insufficient Dc load and some stray effects.

Put a load R of 22k to 47k or so across the Dc side of bridge. to make a 20:1 divider. Without this when the transistor base of off, there is no resistance but some stray capacitance. If you intend to power off same bridge adding a cap will cause both pulses to be missed, then you need a different circuit. see link below.

for other ways to do ZCS pulse, some ok, some not https://www.bing.com/images/search?q=zero+crossing+detector&PC=CMPF&FORM=PUFDEF

You have nothing actively driving the base of Q1 low during the rather short time the full wave bridge output is near zero. Even stray capacitance on the rectified signal apparently keeps it high long enough so that the transistor doesn't turn off.

To fix this, add a resistor between the base and emitter of Q1. It's not clear what voltage is coming out of BR1, but 10 kΩ B-E will probably do it. That not only will actively turn off the transistor a little, but is also increases the threshold of the BR1 output signal where it is considered "zero".

You have added a 10 kΩ resistor on the output of BR1. Now the zero detect signal is more of a square wave.

Looking at the BR1 output signal we can see why, which is that one of the two half-cycles is missing. This means at least one of the diodes that should conduct that half-cycle is open. Since the four diodes are integrated into a single unit, you have to replace the full wave bridge. If you don't have another one, then you can make one from four diodes. Make sure they are rated for the full peak to peak AC voltage, plus some margin.

Another possibility is that the AC source you show is not really floating as you show. If it is the power line, then it is ground-referenced. That's not going to work as you seem to intend if your circuit is also ground-referenced.

Pop up a couple of levels and define the real problem. Right now we're trying to bandaid what seems to be a basically flawed implementation. Explain what this AC source is, how close to the zero crossing you need a pulse edge, etc. Since this appears to just be going into a micro, I don't see the need for a pulse at the zero crossings. A edge would be easier to make, and just as easy to handle with slightly different firmware.

Am a bit surprised that such a low-frequency source doesn't discharge Q1's base-emitter capacitance at the zero-crossing points. The 1N4007 diodes also have significant capacitance that must be discharged. A large value resistor like 500k from base-to-ground should improve response.
Your AC source is line frequency perhaps? If it is a low-impedance source, those 220K series resistors (R3,R5) could be reduced in value a great deal - but if your AC source is line-voltage (220v or 120v RMS) then R3,R5 shouldn't be reduced to small values. Expect that the collector pulse width will be broader in time with the base-to-ground resistor.
If you try this circuit at higher frequency, resistor value will have to be even lower to get Q1 off at zero crossing.
These changes make response-time faster, so you become susceptible to glitches, where a noise spike from your source is counted as a zero crossing. So don't go overboard in speeding things up.

Not the answer you're looking for? Browse other questions tagged zero-crossing or ask your own question.