for one of my projects I'm trying to create a solar assisted drone.

So far this is my schematic: 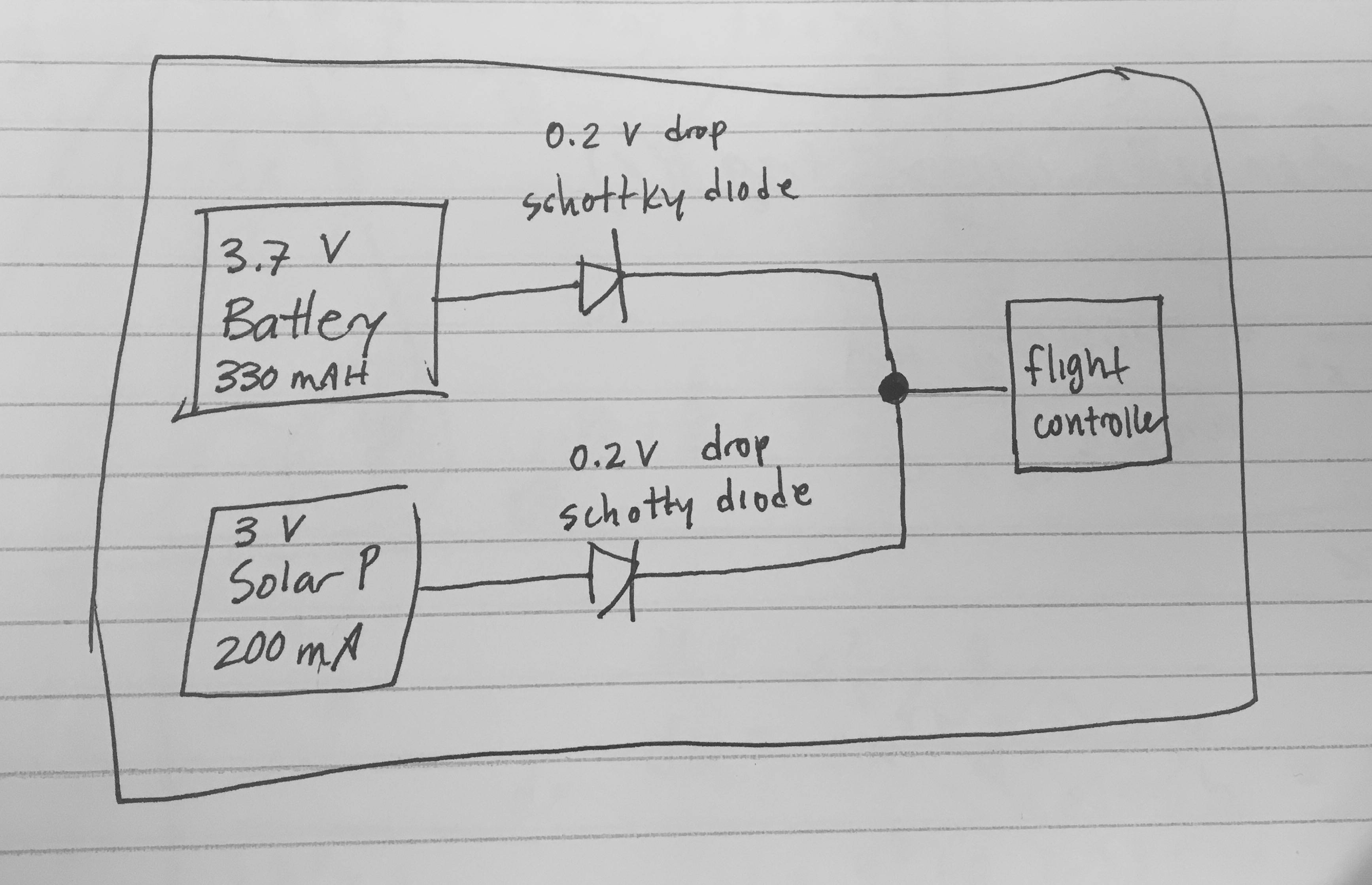 The drone needs a minimum of 3.2-3.3 volts to fly, and I thought about using a resistor or another diode to bring the voltage of the battery down to a greater equilibrium with the panel, but I don't want to cut on the voltage too much since it will decrease flight time. Is there anyway that you can think of could work to wire it to prevent the reverse current?

Your help, input and any advice is greatly appreciated.

(P.S. I'm using pigtails on the battery, panel and the node for easier attachment. I wonder if this could also be a source of error somehow...). 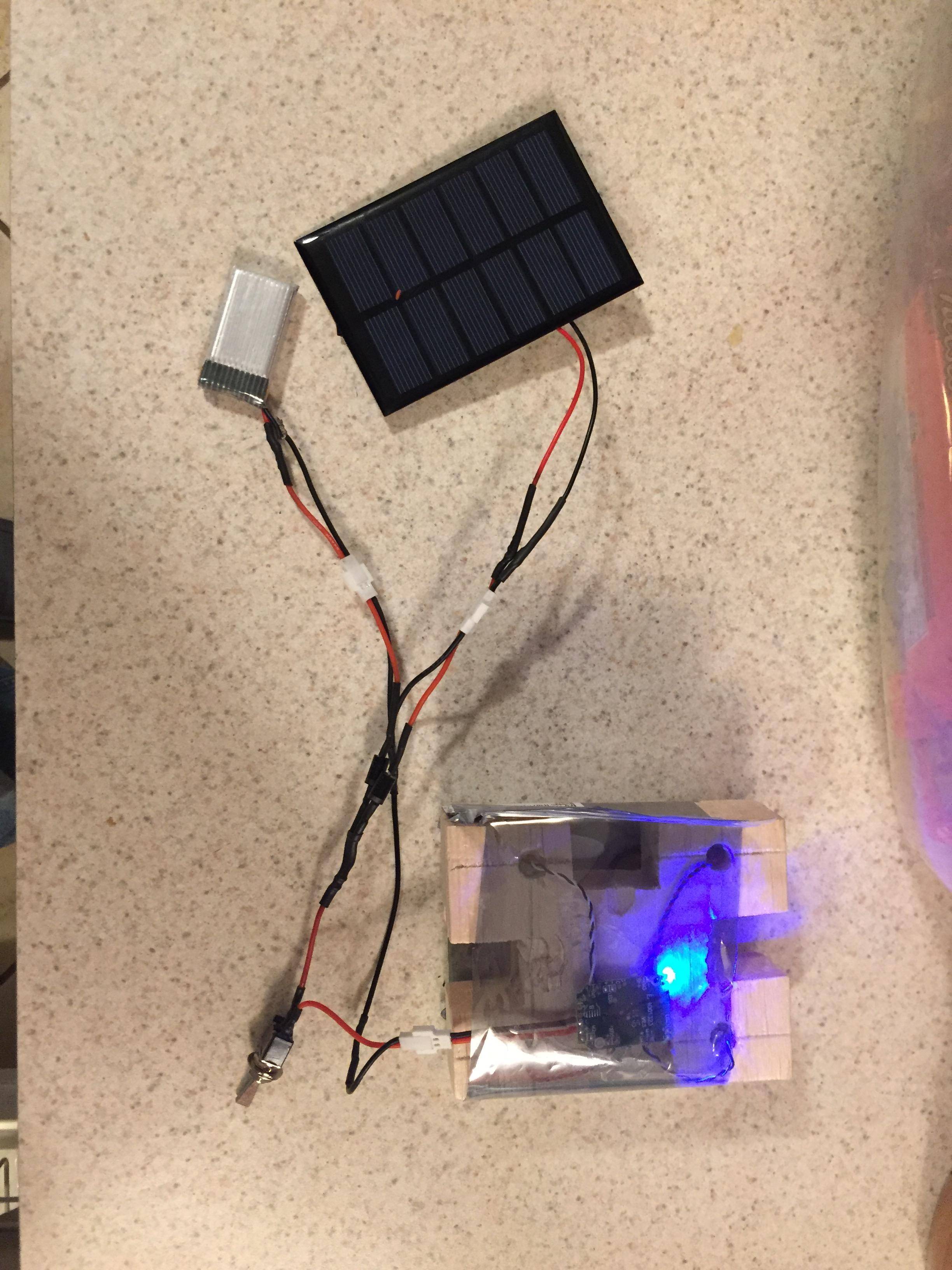 Your solar cell certainly adds more weight than it adds energy for flight. So even under the assumption that the added solar cell's weight did not decrease the duration of flight, the 6% extension in power is probably not worth it.

To put this short: what you need is a power source with a very high power density, i.e.\$ \frac{\text{W}}{\text{kg}}\$. Consumer/tinkerer-grade solar cells are not good in that respect, at all. You'll notice that there's not a single commercial aircraft/helicopter/UAV that uses solar cells, for exactly the same reason (It's really not that airlines wouldn't try to reduce fuel consumption – it's their main cost factor). Strapping a lot of very expensive high-efficiency solar panels on an aircraft works for sailplane-like ultra-light planes, but those are aeronautical designs that, by themselves, without consuming any energy, can fly for hundreds of kilometers before having descended 100m. For those planes, getting just a little more energy out of the solar cells than it costs to lift them up is OK. Quadrocopters are a completely different kind of beast; if you throw an unpowered quadrocopter up, it comes crashing down. A sailplane will sail for minutes (much like a paper airplane vs a paper model of a quadrocopter).

Lithium ion batteries are very hard to beat regarding density. In other words, whatever you come up with will work worse than just adding a second battery.

That's really not your fault – it's just the physics of things that must leave ground that flight efficiency is very directly related to energy density of the power source. If you want to look at a case where that's catastrophically true:

The Tsiolkovsky rocket equation is a formula that describes the problem that a rocket needing to escape earth's gravity will need fuel to achieve that.

That's why for rocket fuel, they usually don't use cheap, easy to handle things like Kerosene in the later stages.

Although, for example, in the sixties, they used a very highly refined Kerosene/liquid oxigen mix for the first stage of Saturn V, the second and third stage use Liquid Hydrogen, which is and was very expensive, but has great energy density, as you can probably imagine; modern rockets used for commercial spaceflight tend to use liquid Hydrogen and funky and slightly dangerous chemicals like Monomethylhydrazine, because the overall power per kg is optimal for such fuels includingt he necessary tanks and engines.

Solar assisted flight is possible if you choose the right aircraft, read here https://en.wikipedia.org/wiki/Solar_Impulse But Solar Impulse is an aircraft with wings optimized for small electric power consumption. Aircrafts without wings like helicopters or drones need to much power for the use of solar cells. Forget the drone and use a sailplane model with a small electric motor. But you will need very thin and flexible solar cells that would fit to the wings smoothly. For your drone, you would need a solar cells with at least 1 A current, better 2 A. The voltage under load must be a little bit greater than the voltage of the battery. But such a solar cell is too large and heavy for the drone. The result would be a drone running for about 9 instead of 6 minutes down at the ground and unable to fly or even lift some centimeters for seconds.

Not the answer you're looking for? Browse other questions tagged batteries solar-cell drone or ask your own question.