If a flip flop has a setup violation and goes metastable, is it guaranteed to settle to the input value when it finishes oscillating?

If I'm using modern D-Flip flops and miss the setup time (i.e. my D input changes close to the clock), the danger is that the F/F will go "metastable" and spend some time oscillating.

Standard designs use 2 F/Fs as a synchronizer to get such an asynchronous signal handled properly inside the local clock domain. When reading about this design, I've seen mentioned the fact that the F/Fs are there to ensure that such oscillations of the first F/F will die down by the time the second clock edge stores the incoming signal in the second F/F.

What I'm curious about is if the synchronizing F/F is guaranteed to settle to the input value after the oscillation time. If my asynchronous signal changed from '1' to '0' at the clock edge, will the Q output be a '0' after oscillating? Or should I assume that I could get an extra clock period where my "synchronized" signal is still a '1'?

When a flip-flop is metastable it doesn't oscillate. It just gets stuck at an indeterminate level between Vhi and Vlow.

When it finally drops out of the metastable state it could go to either the high or low state.

It's not obvious what you mean by "settle to the input value". Normally you get in to a metastable state by having an input value that is in the middle of a transition when the clock arrives. It's not at either a legal high or low value. So when you say the "input value" neither I nor the flip-flop knows whether you mean the value prior to the transistion or after the transition. 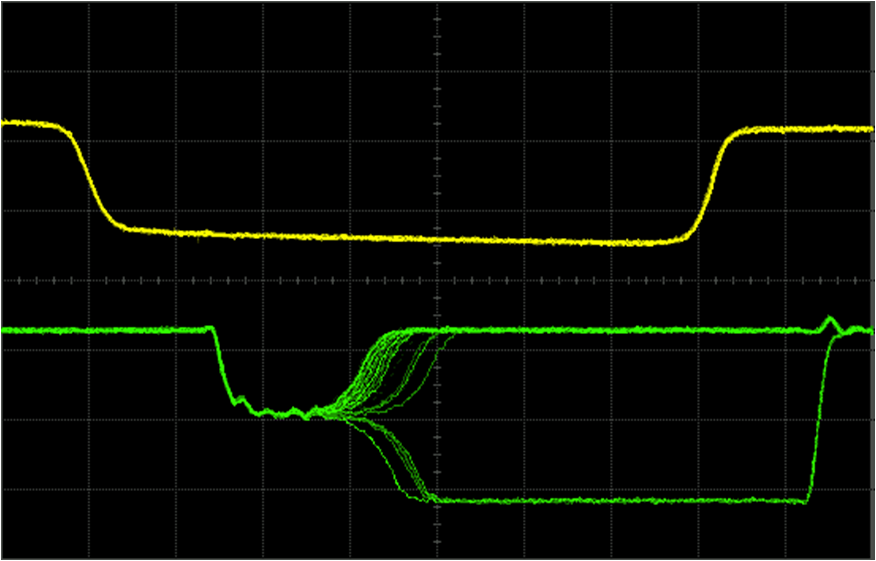 There is no cure for metastability. Period. End of.

While there is no cure for metastability, it can be controlled. Any flip flop will be settling with a small time constant, which in a well designed system is small fraction of the clock period. For a particular violation, let's say there is 100% of the output becoming metastable. After 1 time constant, there is a 1/e chance of it still being metastable, 36%. After 10 time constants, it's only 36/million. That may not sound too much, but with a 10Mhz clock, that's 360 failing events per second, far too many. After 20 time constants, it's about 1/billion. One fail every 100 seconds. I wouldn't want to use a PC that crashed that often.

Now we can get any number of time constants by slowing our clock down. However, that impacts system speed. We can buy special 'metastable hard' flip flops, that have much shorter time constants than regular flip flops.

The real win comes when we use two or more flip flops in a row. This increases the signal latency in a system, but it allows us to keep the clock rate up. Do I really care if the external interrupt signal takes two or 3 clock cycles to cause the program jump? Not at all.

So let's say we have a flip flop with 15 time constants per clock cycle. That stands a 0.2/million chance of failure for each metastable event. If I get 1000 interrupts per second from my disk drive, then I might get several crashes a day. Still not very good. Now I cascade two flip flops, and get 30 time constants. I now have 40e-15 chance of failure. This system is unlikely to fail in my lifetime. But wait, say I'm the manufacturer, and have 100 million of these systems in the field. Now I cascade three flip flops, and my expected failure rate drops to 8e-21. I would not expect any failure from any system in my lifetime.

Note the failure rate is still finite, it's not zero. It is however very very unlikely.

When a flip flop goes metastable, nothing is guaranteed about its output state until the next clock event. It is theoretically possible that the mistimed clock might appear to have no effect, but cause the output to switch a second later (in practice, the probability that the circuit will have failed to reach a stable state within time t (implying that the output could spontaneously change some time after that) seconds after the clock drops off exponentially with t, so if hitting the data and clock inputs with some particular timing relationship would have a 1% chance of the output not having stabilized within 1us, there would be a 1/1,000,000 chance of it failing to stabilize within 1ms, and a 1/1,000,000,000,000 chance of it not failing to stabilize within 1sec).

The reason double synchronizers are considered to be effective "armor" against metastability is that metastability on the input to a double synchronizer will only cause metastability on the output if the output of the first flop happens to switch precisely in the "danger" window of the second. Suppose, for example, that one is using a 1MHz clock rate and the flops will switch cleanly except when the data changes in a certain 0.1ns window, in which case the output may change some time later with the probability distribution mentioned above. Even if there would be a 1% chance that the first latch would be inclined to change at some time after 1us, the probability that it will change during the 0.1ns window when the second latch would be "vulnerable" would be much less.

Note that even with a double synchronizer, it's possible for some metastable states to make it to the second latch. If the input to the first latch is deliberately timed to induce such conditions, it may be possible to get metastable states out of the second latch with some predictable regularity (e.g. one in a million latch events or so). Even these, however, won't necessarily result in circuit malfunction if they are used to feed other synchronous logic. Suppose the signal from the second latch feeds two circuits, one of which has 100ns of propagation delay before a latch, and the other has no delay. For the circuit to malfunction, the output from the second latch must switch sometime within the 100ns window before the next clock edge. That's a bigger window than would be required to cause a register to go metastable, but most of the time, even when the second latch goes metastable, it would not happen to result in a switching event within that window.

11
How does 2-ff synchronizer ensure proper synchonization?
1
Clock Domain Crossing
-1
If the clock and D input of a D flipflop are shorted and clock connected to this circuit, how will it respond?
0
What will the output of filp-flop if its input is metastable?

5
Slow clock edge causing issues with D flip flop behavior
2
is flip flop a synchronous or an asynchronous sequential circuit?
1
Do any flip-flops use separate clock levels for "sample" and "propagate" events
5
Metastability error propagation with flip flop
0
Delays of logical flip-flops
2
Flip flop asynchronous reset timing
0
Is metastability not a concern in CDC if the signal in source clock is at least 3x wide as that of destination clock's period?
0
Synchronized reset signal on asynchronous input - D flip flop
0
Synchronizing a clock enable signal with an input clock