Differences between Interrupts and sampling for hardware button?

I have a hardware button I connected to an interrupt, but my problem is it bounces a bit, making the button press unreliable. I think a good deal of these issues would be solved by sampling in the main loop, but that just feels technically wrong.

I've tried keeping a timer variable and checking it against current time, delays, and other techniques. It seems as if the bounces are just so fast it doesn't matter.

Debouncing is a FAQ. You should be able to find... nearly unlimited numbers of web pages on the topic. Smith commented about Jack Ganssle's widely read PDF on the topic, as well. And with all these answers you've got both hardware and software methods.

I'll add to this "literature" just a little bit by mainly talking about ideas that aren't already covered well. But before I do, a point or two:

Since I've mentioned pulse stretching using a 74121 and since Jack Ganssle does not mention it, and neither does anyone here as yet, I may as well provide this additional link as additional suggested reading on using the 74121 or 555 as a one-shot timer for debouncing switches.

Now, on to doing this through observation with a microcontroller.

I usually use a state machine to handle debouncing. This is almost always driven by a regular "heartbeat" timer I set to about \$8\:\textrm{ms}\$, where possible. (I generally do NOT use edge-triggered interrupt events for several reasons.)

The value of DEBOUNCED for the switch could take on "inactive", "active", and "unknown" values. In this way, you could make sure that your software waits until the switch value settles down after initialization. But usually, I don't bother with that. I replace the "unknown" value with some default value and just use a binary value system, instead.

One of the nice things about this method is that I can debounce an entire port of switches, at once. And I can do it without a single branch in the interrupt code, too. This means very fast and short debouncing code for up to the port-width of the microcontroller (usually 8 bits wide.) An example from the Atmel AT90 shows how this is achieved using a Timer0 interrupt event:

Now, this example shows the full deal, including the previous and current debounced switch values. And it performs all of the necessary state transitions, as well. I don't show the initialization of this code. But the above gets the point across about how easy the state machine is to operate and how little code is required to do so. It's quite fast and simple and does not require branching (which sometimes involves additional cycles as well as additional code space.)

I prefer using \$8\:\textrm{ms}\$ timing because long, long testing with a variety of different people using equipment I've worked on in the past has led me there. I've tried longer periods and when I do so, I start to get people telling me that the "responsiveness" isn't "brisk" enough. (These days, with children growing up working real-time "shoot 'em up" gaming, I might even shorten it up further. They will complain bitterly about even slight delays caused by modern digital TVs in setting up and displaying a frame.)

Some people will have very clear feelings about how crisp and responsive a system should be. Crisp and responsive means sample more often, not less. But personally, I find \$20\:\textrm{ms}\$ observation periods acceptable. (I do not find longer times good enough even for me, though.)

Please note that the state machine I've mentioned must first enter the SETTLED state and then stay there for one more sample time before the value for DEBOUNCED is updated. So pushing a button and holding it, even in the best circumstance, will require these transistions:

So a new debounced state requires a minimum of 3 sample time periods to achieve.

A push button will require at least 6 sample times to go from inactive, to active, and then back to inactive.

Using longer sample times will have correspondingly longer periods. Using the \$20\:\textrm{ms}\$ I mentioned as "acceptable" to me already then means somewhere around \$100\:\textrm{ms} \lt t \le 120\:\textrm{ms}\$ for an entire push button cycle. And that is getting squarely up into the area where people do tend to notice. I certainly don't like the "feel" if it gets any longer than that.

If you go this route, don't be cavalier about using longer sample times. If you must, then I think you also must do a lot of testing with users/consumers.

And if you are developing code for a typing keyboard, then use shorter times. The record for a typist was set decades ago at 217 wpm. This results in about one key every \$45\:\textrm{ms}\$. Typists like that are hitting multiple keys in a controlled ordering. To get good performance for very fast typists using a mercury-wetted reed relay switching system, I found that \$2\:\textrm{ms}\$ worked well.

Debounce can be done in software by masking IRQ's for the bounce time or in hardware by adding a holding capacitor with your RC =T > bounce time ranging from 1 to 15ms depending on size of switch.

To make a SW de-bounce, record the timestamp of current event and check for delay from last valid event:

UPD: with little modification you can register double-clicks:

Interrupts are definitely great for hardware switches as well. By using interrupts, you are avoiding a big waste of resources and possibly energy, especially if you are dealing with battery-powered devices.

Also, as your code gets bigger and bigger, you'll see that it's even easier to implement the interrupts for buttons than polling them in your main loop.

As for your debouncing, it is probably a coding problem. I generally use a ~10ms timer for debouncing, while checking for the release of the button. Be sure to also temporarily disable the button interrupt while you debounce it, so the interrupt routine is not executed several times.

If you are still having problems, post the code here, so we can help.

This is pretty similar to Tony Stewart's Answer, but I think it could be expanded some. 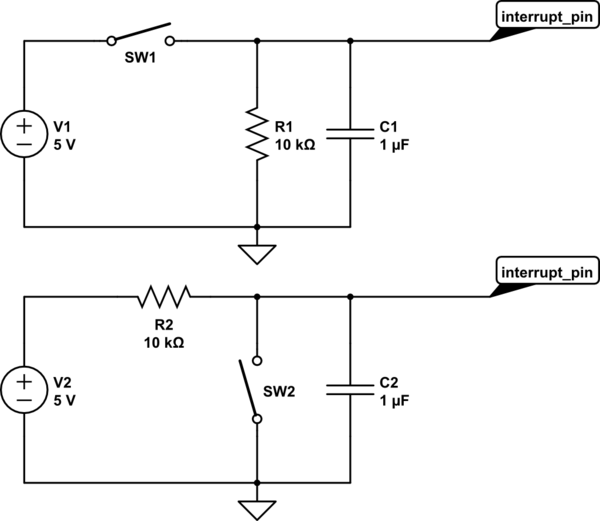 personally, given the cost of a capacitor, it is worth it to me to simply use it, rather than worrying if my software debounce is buggy.

Note that as Tony Stewart said, the time constant in this circuit is 10ms \$(R * C\$ or \$10k\Omega * 1 \mu F) \$. It is going to take somewhere from three to five time constants (depending on the sensitivity of your microcontroller for the button to reset itself, so if your microcontroller has issues with repeating the interrupt function, that may be the cause, and you may need to adjust the cap/resistor to make the interrupt not happen multiple times (That is, only if your interrupt is set to work on a high or low signal, and not the rising or falling edge.

Humans are slow, we don't need the immediate attention of a micro which is in the microseconds range.

This is not, of course, the only nor the right way to always do it but i find generally more sensible to setup a timer (many micros have sys ticks) to fire an interrupt at fixed intervals and shift the state of the pin into a variable for the code to examine later. You end up with a var which is full of ash during bouncing

Most of the time, though, I just use a counter that resets during bouncing. It's fast, tested and easy to do.
If it fails then I try something smarter from the Ganssle document others suggested!

Not the answer you're looking for? Browse other questions tagged interrupts button sampling or ask your own question.

13
How does the capacitor in a debouncing circuit work?
-4
Push button de-bouncing, nothing works. [Please, only answer if you have actually done it (recently or often enough) to know for sure!]
0
Detecting Switch input in ARM 7 and multiplexing two seven segment displays
0
Matrix of SPST switches and buttons with Arduino
0
Effective software switch debouncing AVR
0
Microcontrollers (STM32) and GPIO with momentary buttons
-1
Debouncing of a push button in assembly using Timer1 interrupt - PIC16F628A

3
Arduino interrupts for button input
4
What is the relation between multiplexing and the sampling frequency in a data acqusition system?
3
STM32 Rotary Encoder with Hardware Interrupts
1
Identification of hardware interrupts in microprocessor 8085
5
Understanding interrupts and software button debounce
0
Sampling frequency and FFT
0
A question about aliasing and sampling
0
Interrupt debouncer for switch sensor
0
Interrupts and Assembly language