What do the numbers mean on a three-position switch?

I'm having trouble understanding how this instrument switch works.

Here is the schematic illustrating the three switch states: 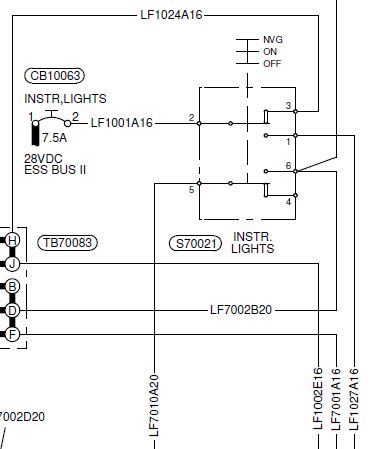 How do I interpret these numbers?

If I were to guess, I'd say that the two relays are shown in the open position (NVG):

On closes the top relay:

Off closes the bottom relay:

I don't have any confidence in my guess though.

Also, I don't understand why there are two junctions not connected to anything: 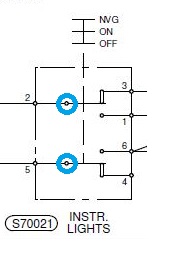 Hopefully this is standardized, and not specific to my wiring diagram.
I couldn't find the numbers referenced anywhere on the sheet.

The most likely conclusion is:

Since nothing is connected to 4, the 5-4 connection is not needed, but the designer probaby chose an off-the-shelf product.

Technically, you would call this a double-pole, triple-throw, top-off switch

When reverse-engineering one part of a schematic, it can become essential to trace connections from there to other parts or pages of the schematic.

We can't do that with the snippet shown here (and even if you could provide the whole schematic, that might become a copyright problem). This limitation is affecting my answer (I want the whole schematic!) but here is my analysis, based on the provided small diagram:

I'm not going to try to decode the likely connections in each of the three positions (I need more of the schematic to do that, and several cups of coffee) but we can make some deductions, for example:

What about the other connections? I would use the same approach as in the example above, to trace the wider power supply connections, for example:

What about the switch in position "OFF"? Since the switch has only two pins per pole for connections (pins 1 & 3 for the top pole, and pins 4 & 6 for the bottom pole) yet is a three-position switch, then it seems likely to me that in the "OFF" position, there may be no connection between the poles and either of the connections for that pole. This is common with "centre-off" switches, for example.

Due to the connection between switch pins 5 & 6 in only one switch position, and since the extra functionality (i.e. the variable light control) is probably for use in NVG mode, then that would be my starting hypothesis if I was reviewing the connections. Then try to confirm or deny that hypothesis, using the rest of the schematic. Does it make sense that those two points would be connected in NVG mode?

Hope that helps to show a general reverse-engineering approach. As I said, don't limit yourself to trying to interpret a single switch; use the rest of the schematic (and any other information sources like BOM, manufacturer's part number etc.) to help you.

2
What does the series of circles in a schematic mean?
1
An help with my practice: a common relay as latching relay
0
How can I create a SPDT for this motor without using a relay?
10
What does this symbol (three connected triangles) mean?
1
What does this "Not Installed" symbol mean on the data sheet?
0
What does the X symbol mean at wire junctions?
1
Switching 240V A/C source between two loads with relays
1
Two way wiring with relay during power failure
0
Multiple SPST relays in parallel for high switching power