i was Implementation of square and triangular wave generator using op-amps LF353.

I observed that when I choose different values of Resistor and Capacitor for different frequencies, with increasing frequency the amplitude of Square wave decreases and amplitude of triangular wave increases. If I extrapolate a trend line in the graph of Amplitude Vs frequency they join a common point where both amplitudes become the same.

Why the saturation voltage(square wave amplitude) is decreasing and triangular amplitude increasing? 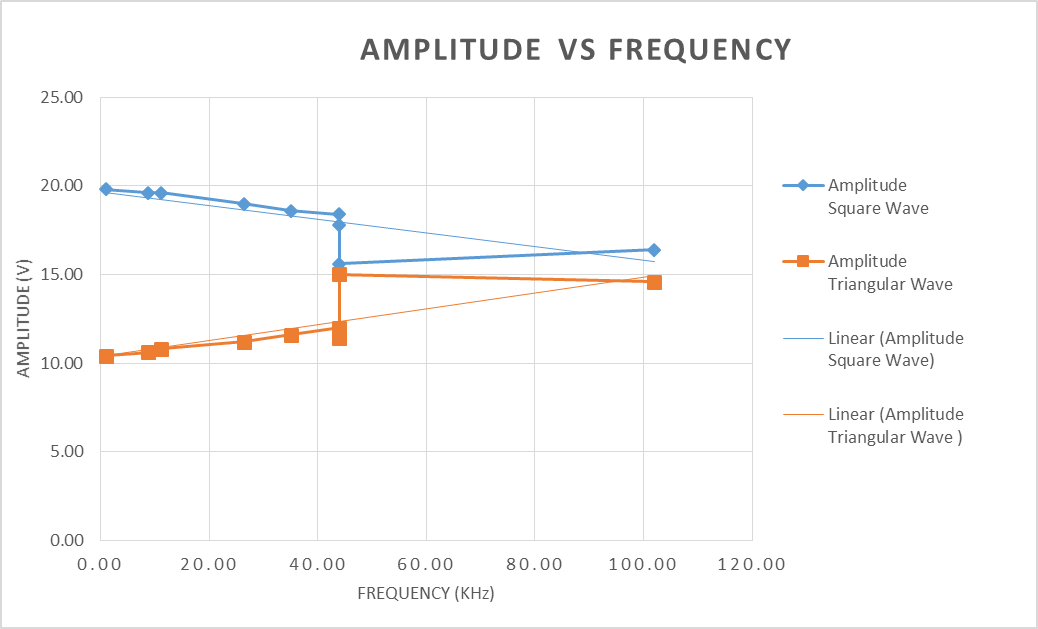 Note: There are two points at 45Khz. The lowest amplitude point of square wave are taken when I selected a greater value of capacitor and smaller value of resistor to form the same combination for 45KHz.

I obseved that When i choose different values of Resistor and Capacitor for different frequencies, with increasing frequency the amplitude of Square wave decreases

It will because a lower value of "R" loads the output of the op-amp more and its saturation voltage increases. Remember the integrator input resistor feeds a virtual ground so it acts just like a load resistor to ground on the output of the comparator.

and amplitude of triangular wave increases

As you raise the operating frequency, the time it takes for the comparator to switch becomes more dominant in the period of the signal frequency being generated. This "extra time" allows the triangle wave (formed by the integrator) to rise to slightly higher peak values.

When using an op-amp as a comparator, the output transistors enter saturation and it can take several micro-seconds to recover from saturation.

Your left operation amplifier with its RC components are an active low-pass filter - that's their purpose, if you think about it!

So what it mathematically is is a "integrator". And that's the whole reason the amplitude of the triangles decrease with shorter period time (=higher frequency). When you integrate a constant (high input) for a long time, your integral will have a higher value than when you integrate the same constant for a short time.

Atop of that, real-world amplifiers also have finite bandwidths, and the gain of the semiconductor circuitry inside an opamp goes down with frequency, and at some point the idea that an opamp has "very very high gain" just breaks down. However, at your cute 45 kHz, that's probably not the situation here, unless you're using something extrodinarily slow (and then, you'd probably know – that opamp would've been labeled as "only for audio applications" or "vintage" or so).

The triangle waveform and the square wave amplitude ideally (as in using an ideal op-amp/comparator) will not vary with frequency- it would be constant for a given supply voltage.

That is because the amplitude of both is determined by the output saturation voltage of the right-hand op-amp (used as a comparator), which (ideally) depends on the supply voltage only (once it gets there).

To put it succinctly, the left hand op-amp is responsible for the frequency,and the right-hand op-amp for the amplitude.

A secondary effect is that some op-amps take a long time to recover from saturation so the output of the comparator op-amp will be delayed by a (more-or-less) fixed amount on each edge. However that would tend to make the output triangle waveform amplitude increase with frequency and would not affect the square wave, so I don't think that's a factor here.

Edit: Andy is also correct that loading of the op-amp/comparator output may be a factor. The limiting output voltage of the op-amp will change with loading.

You can avoid this problem by using a proper comparator instead of the right-hand op-amp with hard output limiting using a pair of zeners, say, so the square wave amplitude is controlled. It will transition in nanoseconds (maybe a couple hundred for a really slow comparator) and your variation with frequency will (mostly) go away until you run into the slew rate limit of the left-hand op-amp on the triangle wave slopes.

There are several things going on here.

First, the amplitude of the triangle wave is inversely proportional to the frequency of the square wave it is derived from. This is because the triangle wave generator is a integrator. The integral of a fixed level is a fixed slope. The longer that level is held, the longer the slope continues, and therefore the greater its end-to-end amplitude.

The second affect is less predictable due to how the second opamp threshold-detects the triangle wave. If all components were ideal, the second opamp would flip immediately at each zero crossing of the triangle wave. That would stop that half-triangle and reverse it. That would immediately cause the opposite zero-crossing, which would flip the triangle slope again, which causes another zero-crossing, etc. The result would be infinite frequency with ideal components.

The frequency you actually get is therefore dependent on the non-ideal nature of the components, which is not going to be specified. The propagation delay, rise time, parasitic capacitance, and particularly the slew rate of the second opamap all matter. Basically, this is a bad circuit if you're looking for a predictable frequency.

They way to fix this is to add some hysteresis to the second opamp. Then even with ideal parts, the square wave will flip at known thresholds of the triangle way. The frequency is then deterministic as long as you're not pushing the limits of what the parts can do.

Not the answer you're looking for? Browse other questions tagged operational-amplifier oscillator wave saturation or ask your own question.

4
Problem with a Relaxation Oscillator (using Op Amp)
2
Op-amp differentiator and integrator circuit: resistor and capacitor values
5
Reduced output of op amp peak detection and hold circuit
0
Creating an oscillating circuit to sound an alarm using a speaker
0
Waveshaper: Amplitude changing as frequency changes
1
measuring ac voltage drop across a resistor with a solenoid in series with it
0
Non-sinusoidal waveforms: relationship (resistance, capacitance)\$\xrightarrow{\text{affects}}\$ (amplitude, frequency)
0
What is the theory behind LC circuit's damping ratio value with a little positive/nagtive feedback?