This question is about the common emitter circuit, shown below, concerning the influence that the emitter capacitor (\$C_E\$) has on the gain of the amplifier. 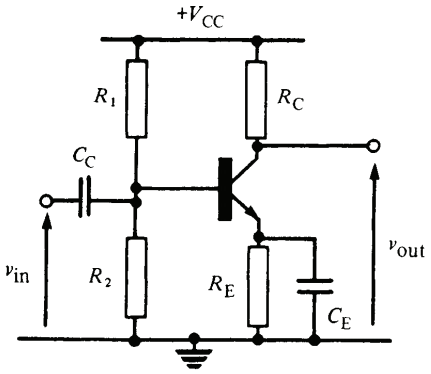 In the book "Transistor Circuit Techniques", by G. J. Ritchie, the author says that the common emitter has the following critical frequencies, due to the influence of capacitor \$C_E\$:

He also says that the voltage gain of the emitter follower can be expressed in the following form, which he calls "standard form":

I'm trying to understand the author's statements that I outlined above, and would like some insight. Below are my attempts.

First, I drew the AC model: 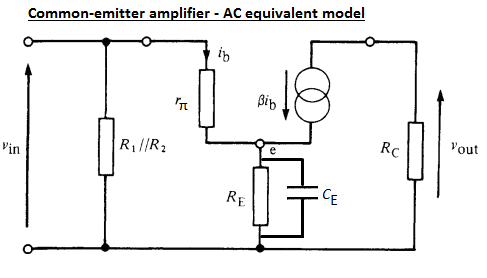 (In the AC model, since I care about the effect of \$C_E\$'s reactance on the gain, I don't neglect it. However, I assume that the input capacitor \$C_C\$ is a short-circuit for all the frequencies of interest.)

Then, I calculated the gain of the amplifier. Here is what I did:

Is my reasoning correct?

Your reasoning is correct. As pointed out in the comment, approximations are very useful in reducing the amount of calculations required to determine the performance of a circuit. In general, most transistor circuits are designed to make their performance independent of transistor parameters as much as possible because those parameters are quite variable in practical transistors. In this case, a good approximation, as you already know, is that the value of the emitter resistance is much smaller than the external resistor. This greatly simplifies the calculations. In any case, tolerances on components will probably swamp out the value of the exact calculation.

Not the answer you're looking for? Browse other questions tagged transistors amplifier decoupling-capacitor common-emitter or ask your own question.

1
Why does adding a capacitor increase voltage gain?