I have a power supply based on VIPer22a. It is an isolated supply with output 17V, 400mA. The input voltage ranges from 100-240V, 47-63Hz. It drives the LED Array module perfectly. I have attached the circuit for that supply as well. But I am designing other product which requires Dual outputs. Here are my specifications :-

The circuit I have attached can help identify what exactly I need because it is working fine. I just want to improve on that or may be make it better. I don't know whether it is constant voltage & constant current or not, please let me know that after going through the circuit.

Please recommend me some design for my application or any improvisation on this. 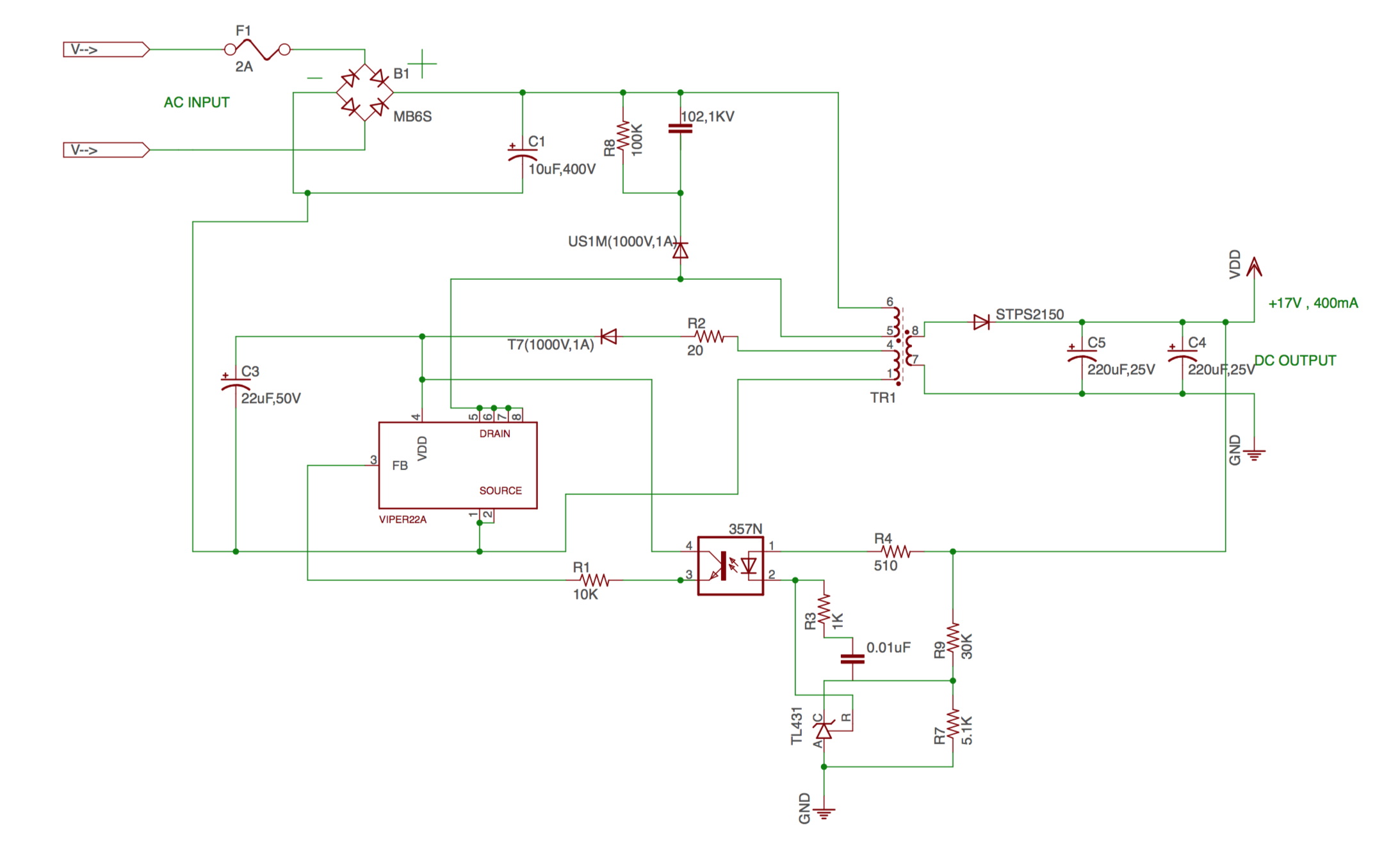 I just found ST's eDesign suite which helps in designing power supply. I filled up my requirements and it displayed all the information I require for my supply.

I just want to confirm the completeness/accurateness of this design and if it fits my purpose. 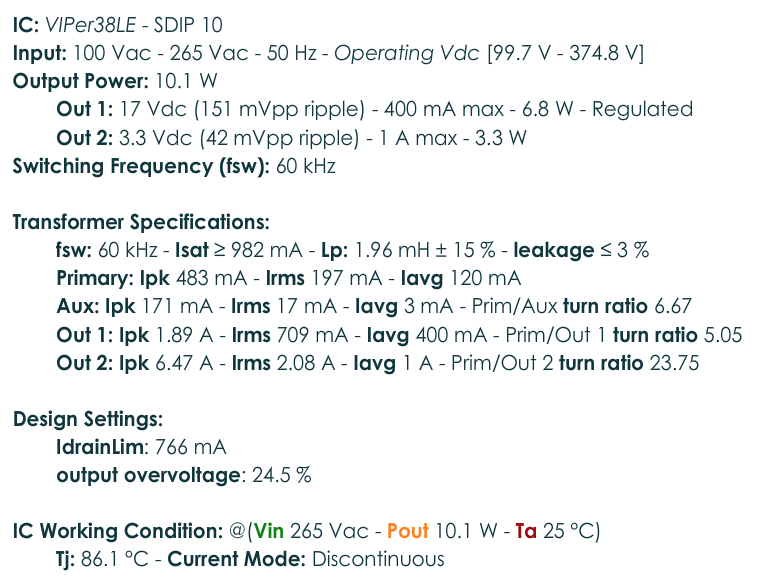 You are producing a regulated 17V voltage. You could use an inexpensive non-isolated buck regulator to produce 3.3V from that. If it was 100% efficient, 3.3V @1A would draw 200mA from the 17V supply.

It's possible, but not guaranteed, that you might do better by picking a somewhat lower voltage than 17V to regulate down, in which case you could add a second winding to the transformer, wound so as to minimize leakage inductance, and use that semi-regulated supply to run the buck regulator. That probably won't change the efficiency by much, but it might reduce the cost if you can use a lower voltage chip and a smaller inductor.

I am glad you are happy with the design, I have a few comments not answers. The design might be great for linear loads, but poorly regulated for LEDs which prefer RMS current feedback.

Unfortunately your load is non-linear and at with typical RGB LEDs operating at 17V with 400mA Max that won't be RMS . I estimate the LED array to have an ESR of about 2-5 Ohms at 400mA rms power or less , thus your current ripple is going to be 100% in Grn,Blue , but not R and is very senistive to the ESR in both 220uF caps, DCR of transformer, RdsOn of switcher and diode power ESR=1/Pd rating.

Is this acceptable to you? Also is your duty factor is a lot higher than design calc?

The problems with regulation and stability using a perfectly good regulator for a nonlinear load do not follow the rule of BOde plot phase margin , nor precise regulation and hence much higher gain error sensitivity to all parameters even with infinite gain in the 2.5V comparator with internal Vref. The feedback is mainly linear average voltage, rather than peak current or even RMS current.

As you know, the transfer function is nonlinear for any diode and with and array of 3P5S is offset by that Zener like threshold and amplified by the incremental slope of diode ESR such that for each colour, the string Voltage , Vs, is the same , but each string will equate a different current transfer function as follows;

However given your feedforward conversion is half-wave sine the RMS/peak is closer \$1/\pi=0.32\$ this error is amplified by the voltage variance of \$If*ESR\$ which is controlled not by the ripple voltage but the difference between (17V-5*Vth+Rs) where Rs = 0 for Bl,Grn.

The two 220uF=440uF caps are probable chosen for the expected ripple with a linear load of 42.5 ohms giving a design parameter of a linear RC = 18.7 ms. With an optimistic ESR of 1 ohm then T=ESRC = 1*440uF= 440us. With pulse current at 60kHz, 1/f=16.7us However, the power ripple in the LEDs is not linear like a rectangular switched PWM and very sensitive to LED ESR variation, Cap ESR variation, Line input Vac range and variable load current if modulated by PWM.

You haven't reported power efficiency vs design goal, but I suspect losses are higher than estimates and sensitivity to Pout with each component loss parameter variations.

Not the answer you're looking for? Browse other questions tagged power-supply switch-mode-power-supply constant-current led-driver or ask your own question.