I'm new to electrical engineering, and I still have many stupid questions. Here's one of them.

This is what I'm reading. https://itp.nyu.edu/physcomp/labs/motors-and-transistors/using-a-transistor-to-control-high-current-loads-with-an-arduino

Also, why do we have to do this:

Next, add a diode in parallel with the collector and emitter of the transistor, pointing away from ground. The diode to protects the transistor from back voltage generated when the motor shuts off, or if the motor is turned in the reverse direction.

In the application you linked, the transistor is part of two circuits, so we need a common reference between the circuits to enable the transistor to operate correctly. 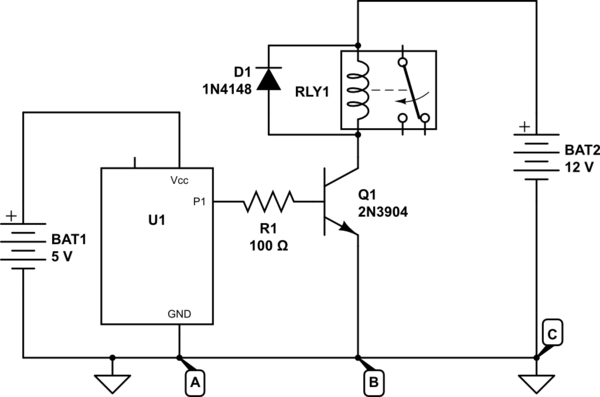 If the connection between points B and C was removed, the relay would not operate, regardless of the state of the transistor, because there would be no path for the relay coil current to make it back to the 12 volt battery.

Having the common ground connection between the two power supplies allows the circuit to operate as required.

It would be possible to have a scenario where the positive terminals of the supplies have to be connected instead of the negative - it all depends on where you need a common reference point.

Diode D1 is a flyback or spike suppression diode. When the transistor turns off, the magnetic field in the motor or relay (or other inductive device) will colllapse rapidly, and would create a high voltage spike on the transistor's collector. The diode will conduct the current that the collapsing field generates, preventing the voltage spike from forming.