Powering a MCU from a battery without a regulator

I have seen some development boards (for example. BL652 dev kit) for low power chips have battery power connected directly to the MCU without a regulator.

For the example case, the battery used is a 3V CR2032. The datasheet for the MCU defines the following parameters:

I'm interpreting this as "If your battery voltage drops to a value between 0-1.7 it isn't defined what will happen".

Why this worries me is because I've seen regulators having the Power Good pins and have found no explicit statements in the datasheet that the MCU from the example won't be damaged by the undervoltage.

How can I decide if a regulator is needed between a battery and a load, to guarantee there are no damages when the battery voltage starts dropping?

If your battery voltage drops to a value between 0-1.7 it isn't defined what will happen

This is often true, but it won't, for sure, destroy anything. Because, if it was destructive, the min Vdd in "Absolute Maximum Ratings" would have been given as a positive value (which I have never seen in any datasheet, and I hope I'll never see that in my life - it wouldn't make sense).

So at this point, you are guaranteed the MCU won't be destroyed with undervoltage. However, it could still behave erratically (potentially damaging other external circuitry).

Now, in this kind of MCU, there is often a feature called "brown-out detection", or, sometimes, "undervoltage lockout". This is a feature that monitors the supply voltage and guarantees that the chip is held in reset state when the voltage is under a given level (sometimes programmable).

Good news: There is such a feature on the specific chip you're using. See chapter 5.1 in the datasheet you linked.

Therefore, you don't need to have a regulator with "power good" detection or an additional supply monitor circuit in your specific case.

Note that, if the MCU didn't have the brown-out detection included, there are tiny chips that just offer this feature (often combined with a timed power-on reset generator) without being voltage regulators.

Actually below 1.8 V there is no guarantee what will happen.

Don't worry about damage these are the operating parameters. To prevent damage you must not exceed the Maximum ratings, which are not included in the linked sheet. If you know the chip(s) which are used you can look up their datasheets and see the Maximum ratings. I have yet to come across a chip which can suffer damage from a too low supply voltage.

You do want your product to "know" and respond when the battery is too low though. Add a battery detection circuit (or using the internal one) which will only release the reset when the battery voltage is high enough.

There is no guarantee your processor will not run amuck and scramble memory or provide unpleasant and possible damaging waveforms on the GPIO pins. It is guaranteed that the micro will not be damaged physically, but it could cause damage of a soft or, possibly, with bad design, a hard nature.

For example, if your battery powered micro is controlling the temperature in a terrarium via a MOSFET- acting as a remote thermostat and the micro runs amuck it could kill the reptiles if the battery ran down. An extreme example, and in reality there should be many safeguards against that happening. It's also rare that a battery powered micro can damage anything outside of itself. A more common example would be scrambling of battery backed RAM or of EEPROM.

To make sure that never happens you must inhibit the micro (hold it in reset) for any voltage that is below 1.80V. Since the circuit that does that won't be exact (there is always a tolerance on the threshold) you might pick 2.0V or 1.90V. +/-0.2 or 0.1V. Usually there is also some hysteresis so it might even be reset at 2.2V and out of reset at 1.9V. There is usually also a minimum reset pulse width for a proper reset to occur so that should also be guaranteed.

You will get most of the juice out of a CR2032 even at low temperature by cutting off about 2.4 or 2.5V so there is little reason to call it so close. 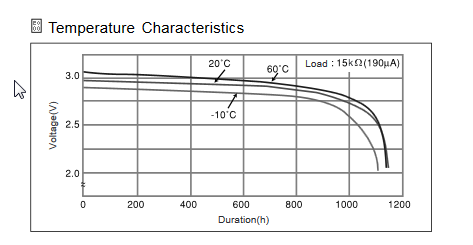 Not the answer you're looking for? Browse other questions tagged power-supply batteries voltage-regulator or ask your own question.

3
How to power a GSM Modem from a Li-Po battery?
5
Proper use of a voltage regulator
3
What is a good way of estimating how long a battery will last for powering up a microcontroller
0
Voltage Regulator Max 3.8v, Lipo cell ok?
1
Using a Micrel MIC2940A-3.3 LDO regulator without additional circuitry?
1
Setup for TPS78001 voltage regulator
2
Can I use series diode to drop voltage from Lithium Ion battery to ESP8266?
0
Powering modules permanently with 3V lithium coin battery
1
resistor selection for TPS3700DDCR undervoltage circuit