One of the pupils puzzled me with a question of building a theremin - a basic musical instrument which has a pitch manipulated by moving the hand around the vertical antenna.

Due to specifics of our course (and skills of our pupils) I proposed to create a digital solution, like this:

Well, the part with arduino works right now. We also have tested ultrasonic distance sensor (instead of antenna+oscillator), but it is not very handy.

But what oscillator to use? The simplest thing I've taught my pupils is the 555-based generator, so I've tried to plug one with a very small capacitor first - like this:

This works, giving the frequency of about 200 kHz (decreasing by about 3% when hand is about 1 cm from antenna). It should be higher (judging by R1*C, though there is also capacitance of antenna) and I want it be higher (for more accurate count) - however I could not increase it by changing R1. With 100k it is only about 250 kHz. With 21k it is only marginally higher and seemingly stops to react to waving around antenna.

This is puzzling. I think I'm either doing something wrong, or can't get more frequency due to some limitation of the chip (probably it may work better at higher VCC).

So I'm seeking for either advice to improve this design, or suggestion of some transistor based oscillator. The most familiar thing is a symmetric multivibrator, but I'd rather prefer something with a frequency depending on a single capacitor (either in LC or RC setup).

I think your best bet is the good old colpitts oscillator - nothing ends up in saturation (unlike a square wave oscillator) and with even modest transistors, it's capable of several tens of MHz: - 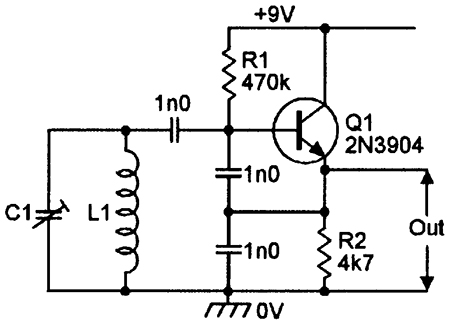 In a slightly more advanced version it is used in capacitance probe measurement circuits looking for pieces of metal rotating past the probe end and, it will certainly detect tiny fractions of a pico farad change.

Attach the antenna (aka probe) at the top of L1 or even make two flat plates (one being 0V) where you can wave your hand over and change the frequency. To make it more sensitive to habd movement, the two 1n0 capacitors should be made lower in value and L1 increased.

It produces a sine wave but this can be changed to a square wave using a fast comparator like a MAX999. The basic oscillator will also run down to 3V (just about) on the power lines.

Since you have tried Theremin approaches other than oscillators, namely ultrasonic, perhaps you could try a reflective optocoupler approach: 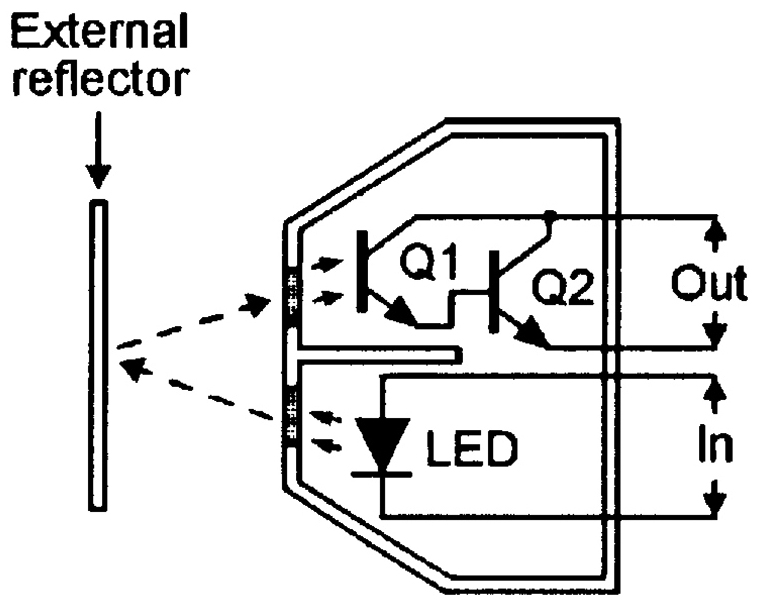 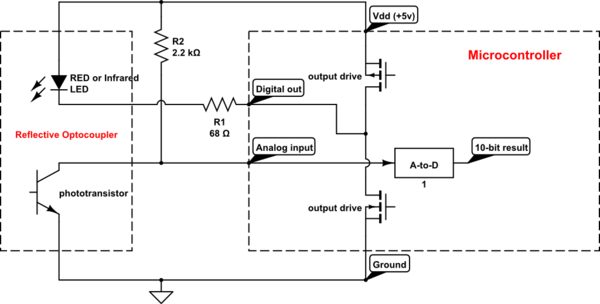 simulate this circuit – Schematic created using CircuitLab R2 can be sized to accommodate phototransistor sensitivity, and to accommodate ambient light. Larger values increase sensitivity. In the example schematic, the A-to-D result will be numerically smaller for more light, so the calculation would be modified to (I2 - I1).

Thanks to Marcus-Müller - I've solved the problem by switching to opamps. More precisely, to comparator. With the typical LM358 I was not able to make more than 200 kHz, but then I fetched basic LM2903 comparators from the nearest shop - and the result is great. I've got 700kHz at once and it is quite enough for this project.

Sorry for I haven't succeed with Colpitz oscillator yet. I still hope we'll try it to compare results. But it appeared bit more complicated to tune it to working mode...

Not the answer you're looking for? Browse other questions tagged oscillator 555 generator theremin or ask your own question.