How can I know if I'm safe from burning out my robot with more voltage?

I have a Wowwee animatronic robot that I've been tinkering with, with the goal of hooking my arduino up to it so that I can control it from my computer.

The problem is, using a multimeter, I've tested that the voltage on the robot's control lines/pins is 3.3v; but the arduino outputs 5v through its pins.

Will hooking up the arduino and using its 5v pins damage the robot? And, realizing this is likely subjective to the robot's specific electronics, is there a way I can test/see/analyze if it would be ok to use 5v digital signal on its lines?

If not, I've been researching the feasibility of just putting a resistor on each of the arduino's output pins to bring the voltage back down to around 3.3v (although I'm not sure if I might need a more in-depth solution, as that would "corrupt" the digital signal?).

Some controllers have "5V tolerant" inputs, so you can provide 5V from your Arduino and the robot will register a logic high and not be adversely affected by the over-voltage signal. I'm not sure if the robot has this feature; you'll probably have to check the datasheet for the microcontroller in the robot. If it does not have this feature, yes, you can get away with a 5V -> 3.3V converter using a voltage divider.

You need two resistors on each output pin, in this configuration: 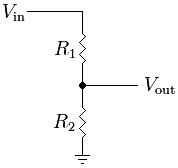 I suggest that you could use \$R_2 = 33\mbox{ }k\Omega\$ and \$R_1 = 22\mbox{ }k\Omega\$ for a safe output of 3V. Other combinations, or higher-tolerance resistors, could get you closer to 3.3V or reduce the power these resistors consume, but that's probably not necessary.

I'm not sure what the interface is on that robot (since you didn't provide a datasheet or schematic), but I'm guessing that there will be some signals that are output by the robot and are used as inputs to the Arduino.

The outputs from the robot will be at 3.3V or less, while the Arduino (according to the "DC Characteristics" table in the ATmega datasheet) expects that the following inequality will hold for input high voltage \$V_{IH}\$:

Practically, this inequality means that your Arduino requires 3V minimum inputs before it will register a logic-high signal. The robot's controller may meet these requirements, or it may not. (Note that the I2C bus requires \$0.7 * V_{CC}\$, or 3.5V, which will not happen).

First and foremost, find and read the datasheets for the controllers on your robot and Arduino. The Arduino's ATmega32 datasheet is here.

If the robot controller tolerates 5V inputs, and provides 3V or greater outputs, then you're good to go.

Alternatively, use a microcontroller that runs at 3.3V. Sparkfun sells a 3.3V "Arduino Pro" board, or PJRC offers a 3.3V Teensy. If you're willing to step away from the Arduino world, there's a lot of processors that run at 3.3V.

The best thing would be to look in the datasheet for the robot. It should say what the min and max logic high input levels are. For example, some 3.3V systems have "5V tolerant" inputs. However, without any definitive data you have to assume that it can't handle more than the 3.3V it is putting out.

No, a single resistor is not sufficient since you don't apparently have a guaranteed minimum current draw spec for a digital input at logic high. You therefore can't know how much voltage a single series resistor will drop. What you need is two resistors in a voltage divider configuration. 3.3V is close to 2/3 of 5V, so 1 kΩ in series followed by 2 kΩ to ground should do the trick. The resistor divider will draw 5V / 3 kΩ = 1.7 mA from the arduino output. I expect that is well within its capabilities, but that's for you to check.

Which Wowee robot do you have.
There are a significant number and their internal circuitry may vary.

Here is a video and page on interfacing to the Woweee Elvis Robot - looks useful.

So if R1 is slightly more than R2/2 the 5V will be divided to somewhat less than 5V. eg

If you use 1% resistors you will probably be close enough to these values.

Use of a single input resistor will probably not work. Two resistors share a common current and so share the total voltage in proportion to their resistances in accordance with Ohm's law.

Water example: If you apply 100 psi at one end of a 100 metre water pipe and cap the far end, if there is no flow then the pressure at the far end will STILL be 100 psi regardless of whether the pipe is 0.5" or 3" or 12 " in diameter. BUT if you allow current flow then pressure drop will occur. Water current flow through pipe resistance causes water pressure drop. Here current flow causes voltage drop. If the flow is such that say 50 psi drop occurs across the pipe then half way along the drop will be about 25 psi and 20% of the way along it will be about 5 psi

Not the answer you're looking for? Browse other questions tagged arduino voltage level-shifting or ask your own question.

2
Arduino, controlling leds with 3.3V even though dig. has 5V?
2
Arduino triggering a TRIAC for EL Wire, no optoisolator
5
Solution for level-translation (3.3V Arduino Due <-> 5V shield)
1
Control NES via Arduino
4
Use battery negative as ground
0
How to connect 3-wire spi with an arduino to the Maxim DS1801 digital resistor?
2
3.3v from 5v Arduino digital pin
0
Sharing a HD44870 display between multiple controllers