Can someone explain why this is a second order filter, and what both sets of resistors and capacitors do?

Also, I read somewhere that both sets are low-pass filters. If that's true, why do we need two sets? I know it attenuates it at -4odB/decade, but how does having two sets of low-pass filters make it do that? 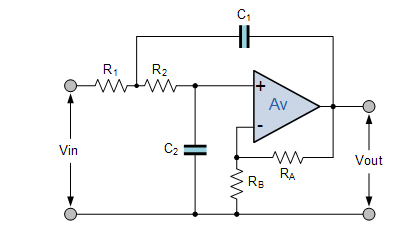 This is an example of a Sallen-Key op amp. Most second order amplifier designs require 2 op amps. The Sallen-Key's clever design accomplishes this using only 1 op amp.

A mathematical discussion of the low pass Sallen-Key op amp can be found here.

For a simpler "thought" explanation of how the 2 capacitors work listen to this video starting at about 1 minute 15 seconds.

Also, Sallen-Key amplifiers are usually used in unity gain mode which would not use RA nor RB (in your diagram). Instead, a unity gain amplifier would simply connect the output of the op amp to the negative input. Adding RA and RB allows for gain adjustment. But also opens the door to other types of op amps designs as the 1 less component count of the Sallen-Key design is no longer an advantage after adding the 2 extra resistors.

The roll off (what you are calling attenuation) calculations of a first order filter can be found here. Basically it is 20dB/decade. A second order filter is double that or 40dB/decade. (Note, the linked article is using 6dB/octave which is about 20dB/decade.)

1.) A simple RC block resembles a passive first-order lowpass. When you connect two such RC blocks in series you have a passive 2nd-order lowpass (see Andy aka`s circuit). This topology can also be derived from your active circuit by grounding the capacitor C1. In this case, you would still have a 2nd-oder passive lowpass with an output amplifier. However, such a filter has rather poor selecivity (damping properties) in the vicinity of the 3dB corner frequency (quality factor Q<0.5). But it is a second-order filter with a slope of -40dB/dec far beyond the 3dB corner frequency.

2.) For improving the filter behaviour (better selectivity, sharper transition between pathband and stopband, higher Q-value) you can connect the capacitor C1 at the opamp output (instead of ground). Thus, you realize a positive feedback effect, thereby improving the quality factor considerably - depending on the degree of positive feedback which depends on the RA-to-RB ratio (opamp closed-loop gain). This gives you the chance to realize different lowpass responses with selectable Q-values (Butterworth Q=0.707, Bessel Q=0.68, Chebyshev Q~0.95...1.3). This active Sallen-Key filter is still of second-order - however, the roll-off region with a damping of -40dB/dec appears now closer to the 3dB frequency (sharper transition between pathband and stopband).

It boils down to you accepting that the following is a 2nd order RC low pass filter: -

If you accept that it is then, at a high enough frequency, the output of the op-amp will essentially be 0 volts RMS and the feedback capacitor (C1 in your question) actually does exactly the same as C1 in the above picture. Just to be clear I'll restate my comment given to @LvW: -

At a high enough frequency, the passive filter has the same high frequency response. This means it has the same roll-off at high frequencies and that equals 40 dB/decade. I'm only talking about frequencies significantly higher than the cut-off but, that's enough to justify the op-amp sallen key filter being a 2nd order filter. I'm certainly not saying anything about the response at the 3 dB point because that doesn't necessarily tell you anything about the filter order.

At high frequencies, opamps CEASE TO CONTROL THEIR OUTPUTS.

Near UnityGain Bandwidth, the opamp Rout becomes the uncontrolled (openloop) Rout, often 10 Ohms or 30 Ohms or 100 Ohms, or even higher if the opamp is a low power IC.

Not the answer you're looking for? Browse other questions tagged low-pass or ask your own question.