I seem to be having issues getting my new PCB etching setup to work.

This produced acceptable results (I was able to go down to 10 mil trace width). However it took a long time as I was exposing with a regular table lamp (around 50 mins per side).

So to get more consistent and finer results, and to speed up the process, I decided to make the following changes:

Needless to say, the new method did not work as I expected. The issues that cropped up:

If I go ahead and rinse this is a solution of Sodium Carbonate, I don't see unexposed photoresist (under the black area of the artwork rinse off), again pointing to under development as the cause.

I am not sure what could be the issue here. Is it because the acrylic sheet is blocking uv rays thus causing pcbnot to be developed properly or is my uv unit to too weak. I has 4 bulbs, each 9W 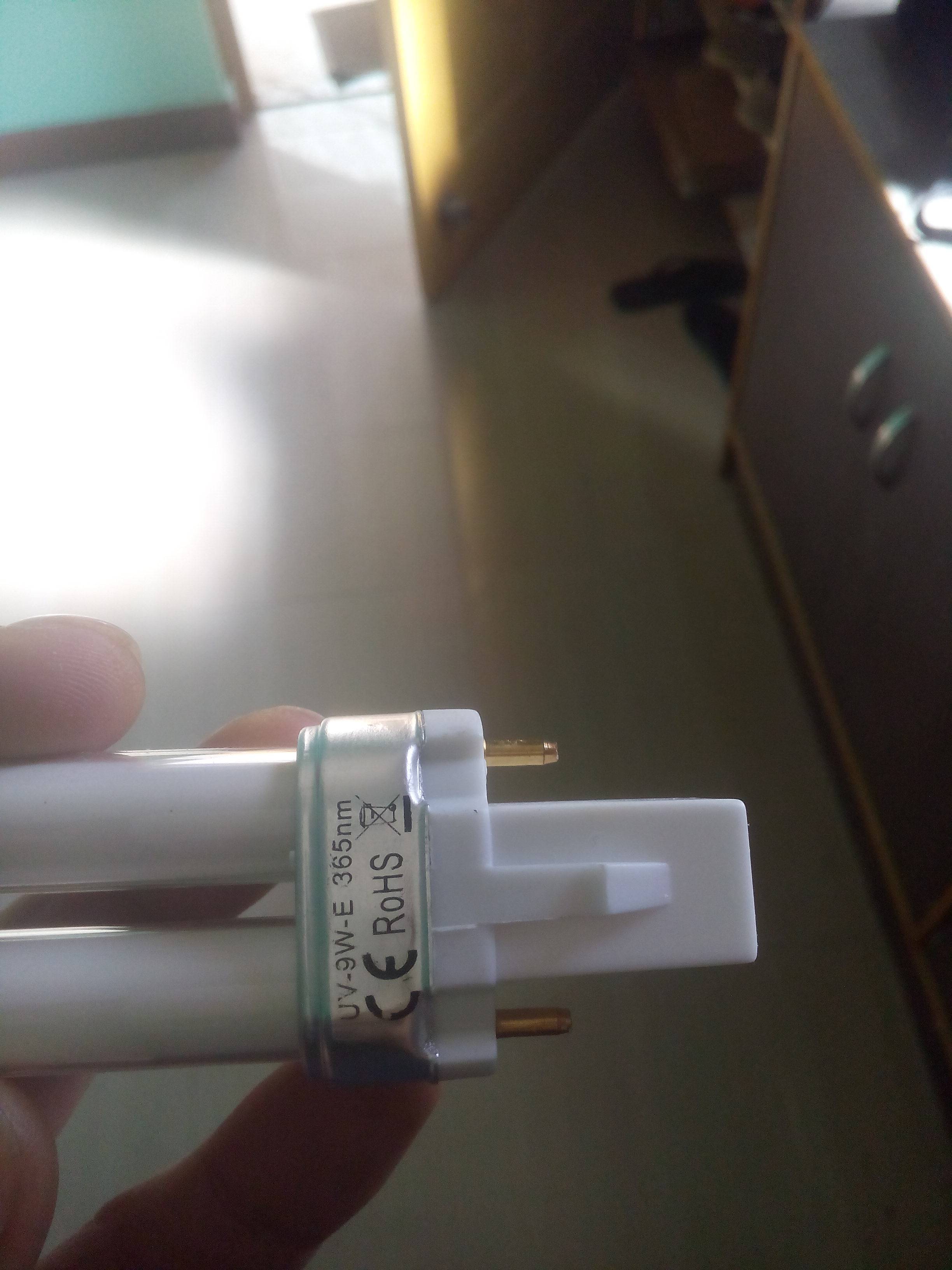 Would appreciate any guidance here. 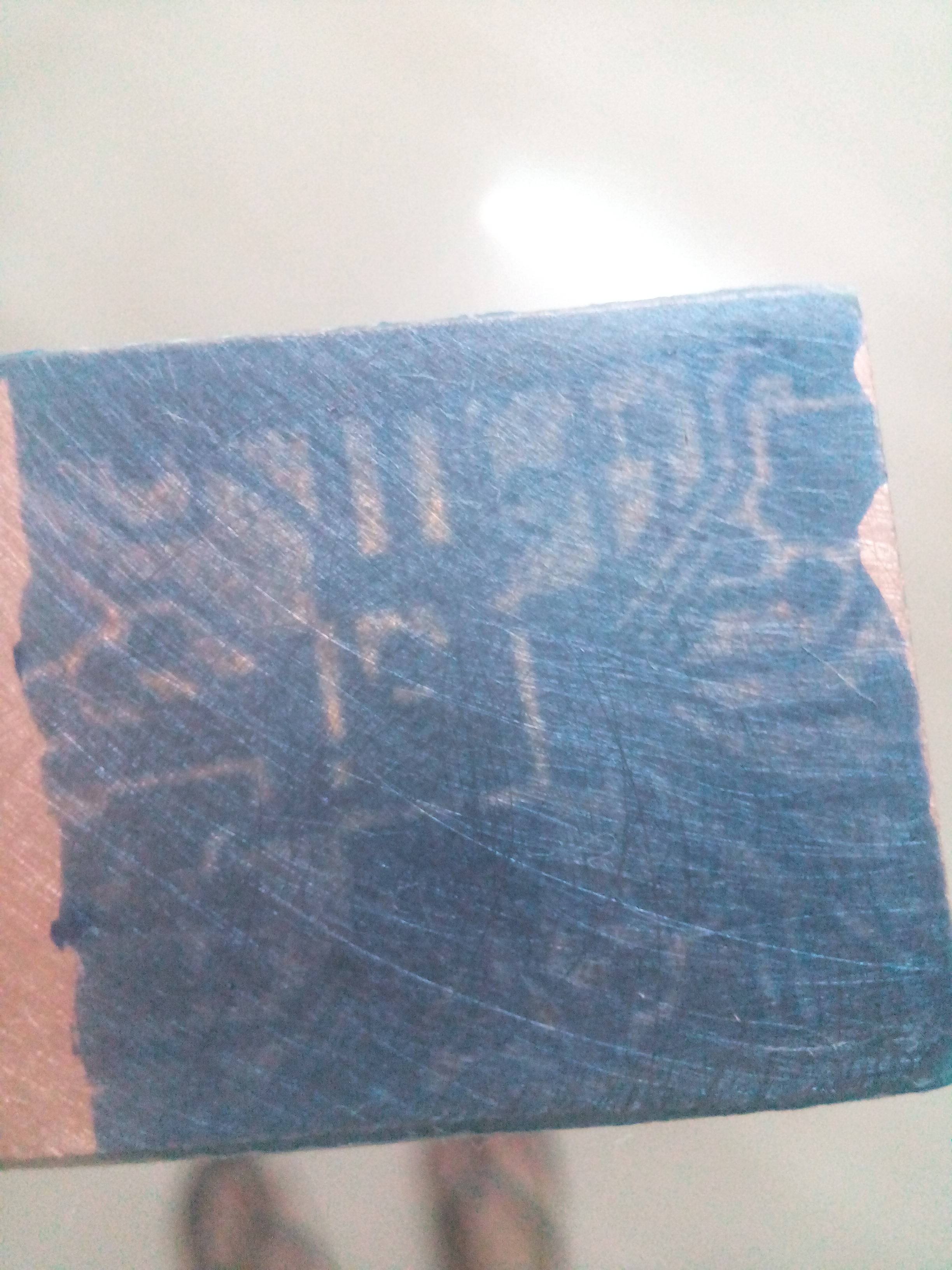 Your UV lamps are fine. They have their peak output at a wavelength of 365nm (last photo), which is well in the sensitive range of most photo resists. For example, Kontakt Chemie Positiv 20 is most sensitive for 370-440nm. That's quite astonishing, since visible light starts at 380nm. But just check what your photo resist needs.

The next problem is the plate. Normal Glass blocks UV below a given wavelength, but most acrylic blocks everything below 400nm. So you should first get a glass plate again. Fused quart glass would be superior since it doesn't block UV down to 200nm and less, but it's hard to get and expensive. May be, you don't need a plate. Put a drop of oil on your PCB and place the mask on it. The paper will soak the oil, get more transparent and stick to the PCB quite tight. But you need to remove the oil after exposure.

And finally, you need to find out the best exposure time for your new setup.

I had a setup using negative photoresist and two pieces of plastic 12" x 8". I built a frame and mounted the plastic vertically, placed two CFL (curly) bulbs (one on each side) within 20 inches. The plastic was cut to fit the frame and bolts together with three bolts (two top, one bottom) and one bolt on each end to tie to the frame.

Hint: I cut the sides out of the transparency and trim the edges with a paper trimmer. In my case the long side has enough space to allow me to leave one inch on both ends of the mask, so I cut one end to half inch on one of them and the other end to half inch on the other. Then the first of the two is offset from the second on both ends. When I tape them together, one end is on top and easy to access for taping. The other is easily done by laying the back (non sticky) side on the plastic and slipping it under the edge of the bottom transparency with the transparency slightly lifted and when in position press down at the top to pin the two pieces together and stick the tape to them.

Once the assembled fronts are made (taped together), the assembly may be taped to the plastic piece to hold it in place and the pins removed. Apply the same technique to locate the pin holes in the back transparency. Align it with the front transparency for maximum alignment. There might be some trouble to do this, but if it is close, it will work. (If not, you have to figure out which one is off and try to get another set of printed transparencies for it and start over.) Then while holding the transparencies in place with a couple of pieces of tape, punch through the holes as before. If everything is right, the holes should come through the mask at the alignment points on the mask.

Remove the back side mask and lay it over the plastic piece for the back (make sure that you have it positioned correctly) and verify that the pins go through the holes as punched. If all is ok, then the second back side transparency mask may be punched either on the back side plastic or on the front side plastic by attaching the first back side mask to the plastic using tape and aligning the second back side transparency mask to the first and taping it to the plastic, then punch the holes through as before. The two pieces can be taped together in perfect alignment and re-adjusted for perfect alignment by untaping/re-taping as needed.

With this setup, the pins help align the two front masks to the dual sided copper clad board and the back side masks as well as the front and rear plastic pieces. The pinned set is bolted together using wing nuts to hold the assembly together and clamp the board and masks so the pins can be removed just before exposure. The assembly is installed into the frame and held with two bolts on top and the plastic pieces against the base board.

And now to the nitty-gritty:

As I said before, the setup was tested using CFL bulbs about 20 inches away (13 watt), one on each side. Exposure was measured from 15 mins to 30 mins. The developer was applied, but there did not seem to be any evidence that UV had set anything on the board. After a couple of tries, I took the assembly outside into the sunlight for 10 minutes and the features began to appear rapidly.

So I substituted glass for the plastic (using cobbled parts and direct clamping) to see if the plastic was the problem. There was no evidence of UV coming from the CFL bulbs so, I built an array of UV LEDs 1" on center 12 LEDs per row, 7 rows. I arranged the arrays so that I can set them at 4", 6" and 7" away from the center of the assembled plastic pieces (I went back to the plastic). The first test at 4" away showed that the material turned to blue within 1 to 1.5 minutes - it was visible at 30 secs. The second test showed it to be incomplete. At least the smaller traces were very light, so I increased the time from 1.5 to 3 mins and finally to 4.5 minutes. Everything looked pretty dark.

When I developed with Sodium Carbonate, the stuff came off fairly easily, but a thin film was left behind, when I tried to take it off, the traces started to come off. I didn't time this, but I'm sure that it took a couple of minutes. Plus I stopped it and tried to restart as the film was not coming off from the unprotected areas. When the traces started to come off, I put the board into the UV for a couple of minutes and it showed material still on the board (started to darken). So I used Sodium Hydroxide to clean it off.

So my point is that I am having a similar problem although I found that upping the UV was very helpful, though I still have the same underexposed indications as yours.

I am planning to move the UV panels to 7 inches away and use a much longer exposure time, like 5 - 7 mins and also use Sodium Hydroxide for the developer. Some have said that Sodium Carbonate doesn't work well. But Sodium Hydroxide is fast so only a few seconds should do it or it will remove the traces!

Not the answer you're looking for? Browse other questions tagged pcb pcb-fabrication etching or ask your own question.

0
longest time a circuit can sit in developer