How can I share a 900 MHz antenna between two radios?

I have an already working ZWave radio on my PCB. It has a PCB antenna and it's working perfectly. I need to add the Si4362 Low Current Receiver which is a receiver for the bands from 142 to 1050 MHz to my device.

Due to constraints in the PCB size and the fact that modifications to the enclosure are pretty much impossible at this stage of the project, I need to examine the possibility of sharing the PCB antenna between the ZWave transceiver IC and the Si4362 Receiver-only IC.

Also in the question Shared antenna on multiple 2.4Ghz receivers the answer suggest a power divider or splitter, but I don't need to just split the signal. I need to be able to switch between the two radios to decide at run time wich radio will use the antenna. Fortunately, both don't need to be active at the same time.

Also, I can't use chip antennas because ZWave doesn't allow that.

Does anybody know how to achieve this? 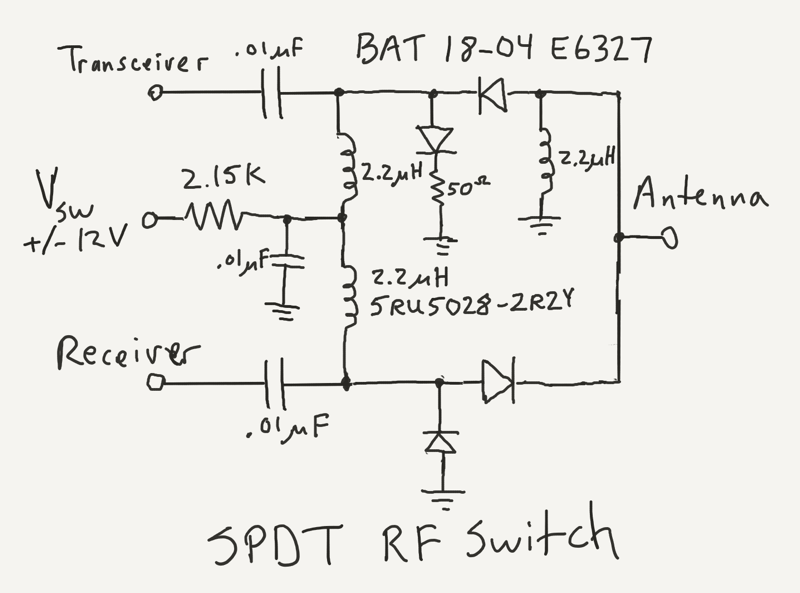 This switch is based on a design from an article I wrote about diodes. The 50 Ohm resistor makes the switch absorptive for the transceiver, so that it doesn't short the output. The receiver can be shorted with a reflective switch. This will improve the isolation, which will help keep power from the transmitter from overloading the receiver too much.

PIN diodes make good RF switches. They have low on-resistance and low off-capacitance, and are usually lower cost than IC RF switches. The inductors need to be high-impedance at the signal frequencies. They need to be high-impedance at the frequencies of interest. The 2.2uH chokes in this schematic are not optimized for your application. If you can tolerate a little bit of loss, a 1K or 2K resistor is a lower-cost and easier-to-design substitute for the choke.

More details are in The PIN Diode Circuit Designer's Handbook from Microsemi.

Not the answer you're looking for? Browse other questions tagged rf pcb-antenna or ask your own question.

4
Sharing antenna between receiver and transmitter
1
Could transmit/receive turnaround be improved by having a heterodyne receiver switchable between high-side and low-side injection
1
How do I avoid interference in 433 MHZ RF transmission (in my case)
0
designing trace anthtenas for 2 sets of rf rx+ tx
1
Difference between types of 433 Mhz RF modules
1
RF signal boosting
2
Test circuit to confirm RF receiver frequency? (315Mhz vs 433Mhz)
0
How does this 433Mhz garage remote control work without an antenna?
1
Simulating an RF remote control using an Arduino
0
Circuit for selecting between PCB antenna and external