I'm currently reading the art of electronics 3rd edition and have stumbled upon this transistor power amplifier towards the end of chapter 2 (see picture below). 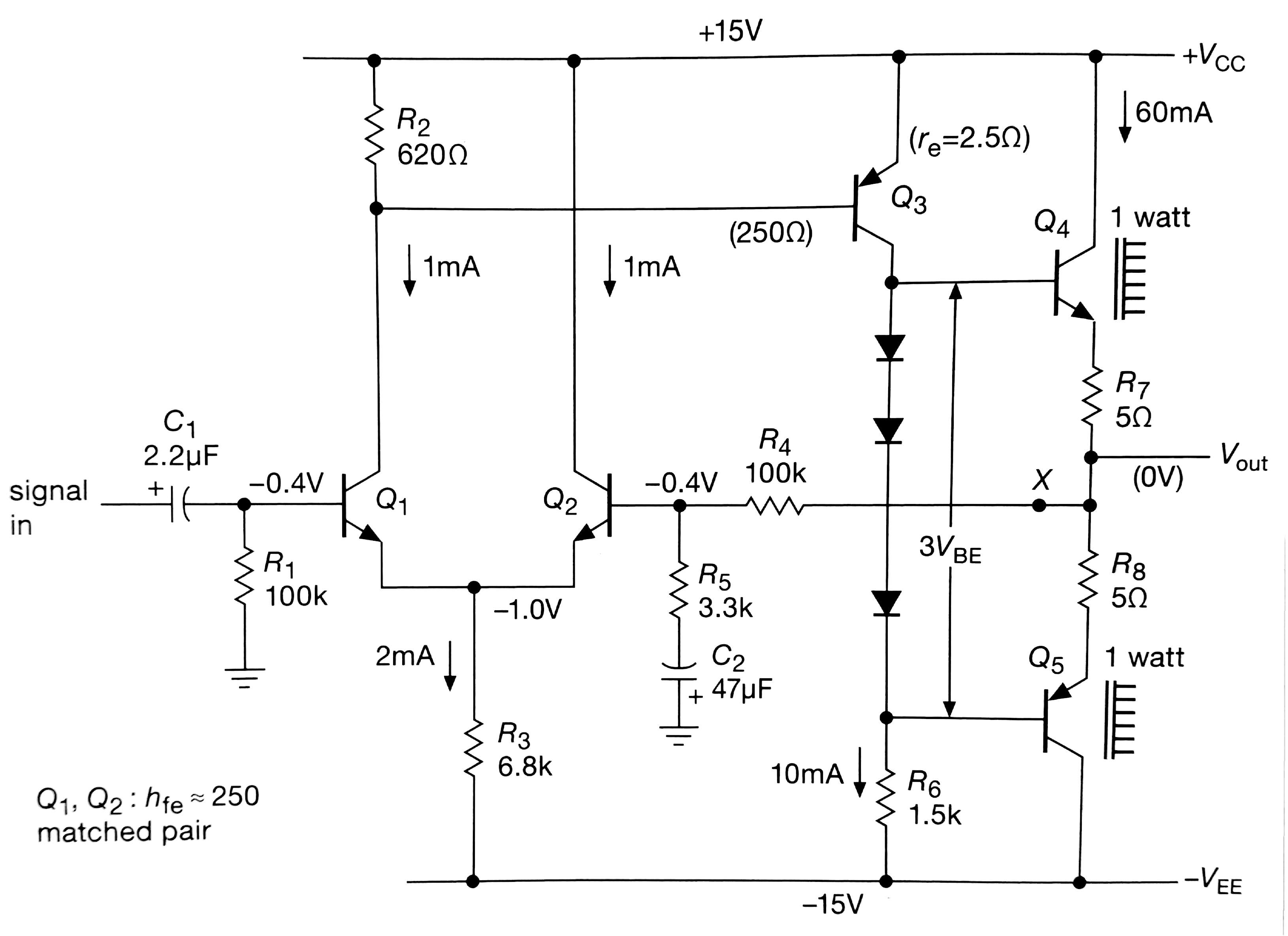 The open loop (cutting point X from its connection to the output and grounding it) output impedance is about 20 ohms assuming beta of about 100 for Q4\Q5 since the 1.5k resistor looks like a 15 ohms resistor when looking through the push-pull output stage.

Side note: I understand that the gain will vary as the input swings because the differential amplifier gain is dependent on the base emitter resistance which changes with collector current, although I'm not sure how will this affect the circuit's output impedance.

In the book they state that the closed loop output impedance we calculated i.e. 0.3 ohms is only true for small signal calculations and does not mean that the the amplifier can drive a 3 ohm load to full swing.

If it may help the book states that the 5 ohms resistors in the output stage limit the the large signal swing and for example a 4 ohms load can only swing 10Vpp.

Edit: I see the 1 ohm load caused some confusion, indeed 1 ohm is too close to the output impedance so please ignore that when answering my question ( I deleted it from the example and changed it to 3 ohms instead so it will not load the 0.3 output impedance considerably). my question still remains though.

The assumptions are what limits it to small signal. Neil_UK carefully took a moment to bring up the idea of linearization, adding that the idea is synonymous for small signal analysis.

Circuits can quickly become complex. Transistors of every kind have curves which aren't linear (in the simpler meaning of a "straight line" when plotting one variable vs another.) So do capacitors, inductors, diodes, etc. It doesn't take much and all those interacting elements can make the mathematics seem almost too complex. Yet a designer must design and be able to read the designs of others.

Scientists simplify complex problems by reduction. They eliminate relatively unimportant details (which may have an impact, but a negligible one) from consideration and focus on the dominant factors. This greatly reduces the problem and makes it tractable. Similarly, engineers use linearization about a designed or assumed operating point in order to greatly simplify getting a quick and meaningful answer to an otherwise much more complex-seeming problem.

Every curve, no matter how complicated, can look exactly the same as a straight line if you zoom in close enough. This is the small-signal approximation. You can think of this as nothing more than taking the derivative of some curve at some specified point, to get the "local slope" there. This makes it a lot easier to analyze. Of course, it is only valid at that specified point (operating point.) If you go somewhere else, the slope will likely be different.

In this case, there is a quiescent point for which this amplifier was designed by someone who knew what they were doing. This quiescent point is probably designed around the place where the output will be half way between the two power rails. (If you are experienced, and knew that the designer was also experienced, this assumption would be reasonable to make.) So the estimates of analysis will all be made with this operating point in place as an assumption for those purposes. And when you compute results from that, you are assuming you don't go too far from this assumed quiescent operating point. Which implies that the input signal itself doesn't cause much change at the output.

So, of course, a large signal analysis would yield different results since the assumed operating point is moving to a different location. And this means all those local slopes have changed.

The textbook you referenced also nicely provides you with a small table on page 122, showing you the open loop and closed loop gain values as the output moves from the assumed \$0\:\textrm{V}\$ to \$-10\:\textrm{V}\$ and to \$+10\:\textrm{V}\$. You can see that the open loop gain varies from 1360 to 2400, while the closed loop gain varies from 30.6 to 30.9. The open loop gain helps illustrate this point, that changes in the operating point also change the slopes and therefore the resulting calculations. But that closing the loop uses negative feedback to manage an important parameter -- the gain -- to minimize distortion as a result of gains that would otherwise vary as the operating points varied.

But an amplifier circuit like this won't be operated only so that small signals appear at the output. Big signals are wanted. So once you've done the small signal analysis, which applies only near the quiescent point of operation, you then stand back and look at what happens with large signal swings, too. At this point, those emitter resistors certainly come into play and will act to limit the available current into a load, for example. But as we will see, \$R_6\$ will present an even greater challenge when examining large signals.

So you really do two kinds of analysis for a circuit like this. A small signal analysis what the circuit will act like near the quiescent (or nominal) operating point. And a large signal analysis which will help you scope out a useful range of behavior. Some circuits allow these two domains of analysis to be relatively separable. Some aren't so easily separated.

Actually, the textbook really does a very good job in chapter 2 preparing you for the analysis they then do over a couple of pages on that circuit. It's quite good.

That's the meaning here. However, this doesn't continue to work if the emitter resistors become important, as they will drop voltage away from the rails and limit the ability to supply a larger voltage to the load. You have \$15\:\textrm{V}\$ at the upper rail. \$Q_4\$ will need at least a \$V_{CE}\ge 1\:\textrm{V}\$ to remain in its unsaturated, active mode. So now you are down to an unloaded \$14\:\textrm{V}\$ maximum at the output. But with loading (current), then \$R_7\$ may further reduce this maximum possible voltage to something still less. This has nothing to do with the small signal analysis, really. It's just a simple matter that the emitter resistor drops a voltage when supplying current. So loading does matter regarding the maximum excursions possible. Even with the small signal estimate about the dynamic series resistance.

Note in answer to your first commented question below this answer:

But this doesn't tell you over what larger range that gain of 19 will still work. Even a mere few hundred millivolts and you are already into amps of current, which will cause a large drop across \$R_7\$, for example -- a very significant drop.

So this circuit just can't get there from here. On the negative-going side, as current demands increase, the bottom will simply go into a soft clip and that means lots of distortion. So this will be the real limitation in the circuit.

\$R_6\$ is a serious limitation in this circuit, regarding the ability to handle high currents towards the negative rail. And it will come into play long before either of the emitter resistors do.

a) Generally. 'Output Impedance' is really only defined for small signals. It's the change in output voltage for a change in output current, a slope resistance. Once you get big signals, the output conditions are changing, bias currents change, one transistor may cut off, and you no longer have an output V/I curve that can reasonably be approximated by a straight line. You often see the term 'linearised' used as a synonym for small signal behaviour.

b) Specifically for this type of amplifier. It's an audio amplifier. Once you get signals big enough to take you away from 'small signal' behaviour, it's distorting and no longer being a good audio amplifier. You wouldn't use it in that region, and wouldn't be interested in computing its behaviour there either, other than to know it was no longer small signal.

The output impedance forms a potential divider with the load and of course, when driving at close to the full power rail, there is no more headroom that can be used.

Not the answer you're looking for? Browse other questions tagged transistors amplifier analog impedance feedback or ask your own question.