High side regulation of current for proportional valve

I'm working with a circuit which is regulating the current over a generic, proportional solenoid valve (L1 in the schematic below). The characteristics of the valve coil is unknown/will vary and the task of the application is to compensate for resistance/inductance variations in the coil caused by temperature changes etc, by means of a PID regulator. Currents are roughly between 200mA to 1A.

We are using high side current sense and a high side driver to achieve this. The current is obtained from a 5V 500Hz PWM signal, which controls a "smart" n-channel high side driver MOSFET. On-resistance shouldn't matter much since the task for the circuit is to compensate for resistance.

The driver uses a raw, non-regulated 24VDC from a vehicle to control the valve. The free wheel diode used is this one.

The high side current is measured over R1 with a high side current sense amp which gives its output as a current between 0 and 1mA. This current is in turn measured over the resistor R4 by the microcontroller, so that 1mA equals the maximum ADC value. (For various reasons ADC ref has to be lower than 5V - in this case it is obtained from an accurate voltage reference.) 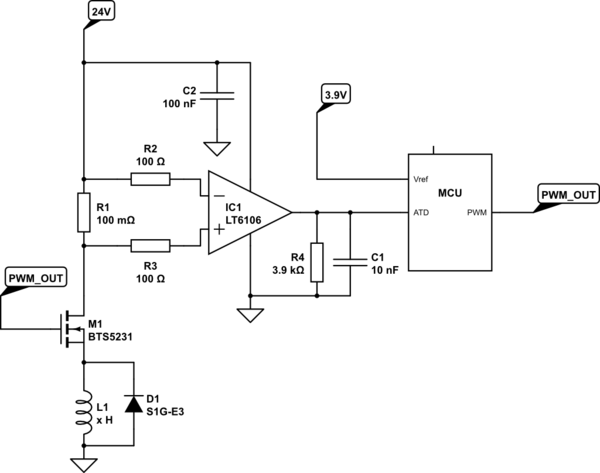 The PID regulator is implemented in software and works as it should, compensating for changes in resistance. It does however assume that the inputs and outputs are linear, so the current is only measured once per period, at a fixed point. We've tested that this works by connecting resistors in series with the valve. Everything works fine as long as the valve supply is kept constant.

However, when we change the supply voltage, the regulator will attempt to compensate, but we still notice a non-linear pattern in the output current, much higher than the <1% than can be expected from the LT6106. It can vary as much as 10-20% between 20V and 30V supply.

After much investigation, we came to the conclusion that this is because of some non-linear phenomenon in the coil. At the high-side, the PWM always looks pretty much like a digital square wave, so there's not much to tell from that.

But on the low-side, the curve looks very different depending on supply voltage. We managed to measure this by adding a shunt resistor on the low side, it looks something like this: The above pictures are for the same output, but with the regulator trying to compensate for the change of current caused by the change of supply voltage, hence the different duty cycles.

I'm a software guy, so by no means an expert at electronics, let alone at magnetic fields in coils, please bear with me.

General feedback on the design is also welcome - I know that the driver IC is obsolete.

Don't expect a relay coil to act like a linear inductor. The relay coil will have an iron core, and when properly designed, it should saturate. The details of the saturation curve will be temperature dependent. This saturation is effect is called the B-H curve of the iron. An extra challenge is that the iron gets magnetized, and this causes hysteresis. To control nonlinear current with hysteresis in software, a Kalman filter should work better than a PID.

One way to think about this is that the relay is a linear motor, and the circuit needs to detect the motor position without directly measuring the position. The paper "Iron Hysteresis and Enhanced Kalman Filtering for Sensorless Position Detection of Synchronous Motors" is an example of someone else using the Kalman filter approach.

Kalman filters used to be more difficult to understand but now there are excellent tutorials such as "How a Kalman filter works, in pictures"

I agree with Olin that a low-side N-channel switch would be better. I would fix this before worrying about the other details.

Not the answer you're looking for? Browse other questions tagged current-measurement pid-controller mosfet-driver flyback solenoid-valve or ask your own question.