Coil switching for resonance with an arduino controlled TRIAC

I have a capacitive system which I need to power via resonnance using a coil. Resonance occurs at several frequencies, therefore I need a different coil for each frequency. So far I've manually switched the coil whenever I needed to use the other resonance frequency. However I feel like this process can be automated, so I've designed a shield for my arduino that allows me to do just that, to switch coils using a button or later an automated command coming from the computer to the arduino's serial. (The arduino here is an UNO).

Since it's using alternative current, I needed to use a TRIAC. The design I've come up with so far looks like this 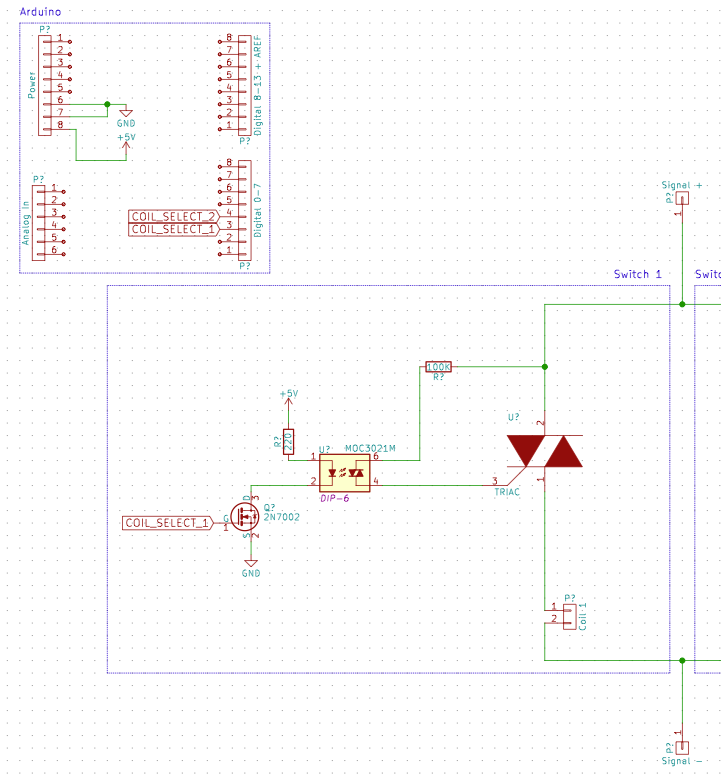 On the shield, as can be seen is a small 2 poles connector onto which the coil is plugged. There's another coil-switcher right next to this one as I'll be using 2 coils on this system but that I haven't shown as it's exactly the same as the first one. There's a small opto-TRIAC (the MOC3031M) to separate the arduino from the rest and to trigger the actual TRIAC. I drive the opto-TRIAC using a simple MOS from the arduino.

My question now is the following : Is that a good way to control such a system?

What I really only want to do is to be able to select between one coil or the other without having to physically change the component.

I would use an analog switch instead.

Not the answer you're looking for? Browse other questions tagged arduino triac coil resonance or ask your own question.

5
Control AC load with microcontroller. TRIAC behaviour problem
3
Reading the voltage of an energy harvesting coil using Arduino ADC
2
Controlling a 240V AC Universal Motor with Microcontroller, Optoisolator & TRIAC
1
TRIAC controlling a light self-triggering for very short periods
1
How to determine whether a system is in resonance with an externally applied voltage - RLC Circuit
0
Dimmer with zero-crossing circuit and TRIAC
2
Why does a Tesla coil secondary need intermittent excitation to achieve resonance?
0
Arduino Detect something is connected to relay
1
Function Generator to Audio Amplifier