I am designing a discontinous conduction mode flyback converter, 100kHz using UC3844 IC with the spec. 220V,50Hz to 5V 5A. The issue is that after testing it for an hour, the transformer starts heating up (tried with different cores.)

With this configuration, the transformer was heating up to 80deg C in just 30 min.

From the calculations for the core loss, it was coming to 170mW, but copper losses were huge

Seeing this with the thermal resistivity of 50K/W, the temperature would rise to almost 80 degC. So, it confirms the problem.

I could not fit more diameter winding on this bobbin, I had to increase the core size.

Although the temp decreased but still hovering around 65degC.

I think you have a borderline but significant core saturation problem. Using your 3rd example, the current into the primary rises at a rate of V/L where V is about 311 volts (rectified AC and smoothed) and L is 1.6 mH. So, in 5 us I would expect to see the current rise to about 1 amp.

This is based on the basic inductor formula of V = L.di/dt 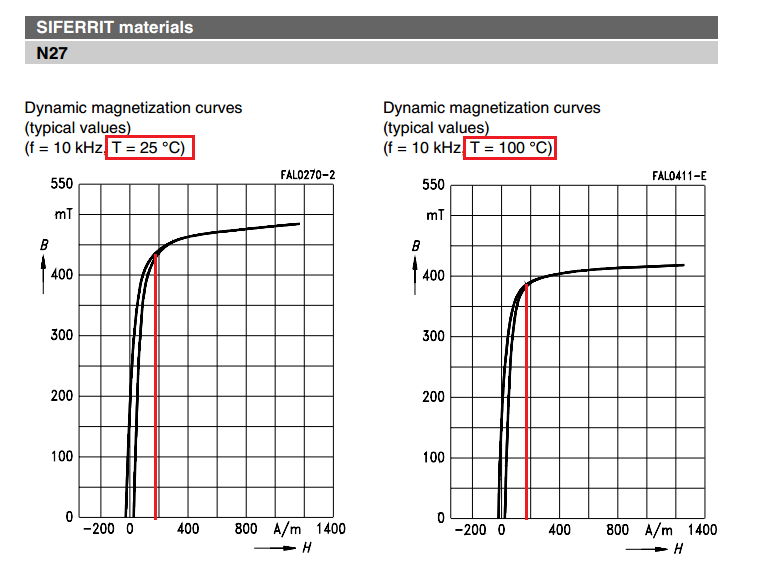 On the two diagrams I've taken the liberty of drawing a red line that shows where the equivalent ungapped H field peak value is sitting (185 At/m). As can be seen on the left diagram (ambient of 25 degC) 185 At/m is starting to significantly saturate your core.

It's quite critical that a flyback transformer does not saturate very much.

So, as the core saturates the inductance tends to fall and instead of a linear rise in current per micro second you get a seemingly out of control rise like this: - 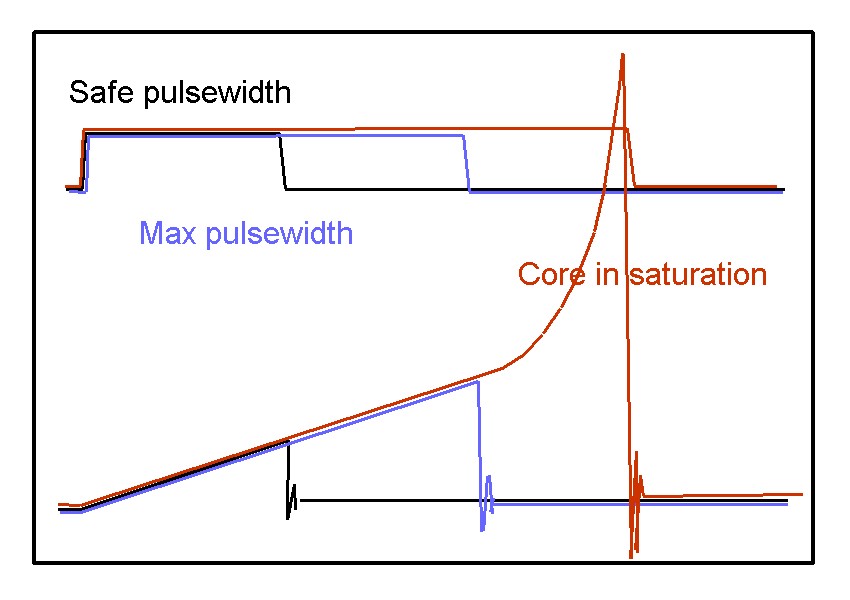 This may lead to a very significant rise in the peak H field and the core starts to get quite hot. But, you may say: -

So what, the controller will limit the current to that needed to store only the energy needed to pass to the secondary load

However, as the core saturates the inductance falls so what was sufficient current (for a given value of inductance and therefore the correct amount of energy based on E = \$I^2L/2\$), now needs to be more current.

Do you see the problem and this isn't even considering what happens when the core gets warm (see the graph on the right in the picture above). At 100 degC there is even more core saturation.

I think you are running into saturation problems.

Not the answer you're looking for? Browse other questions tagged transformer switch-mode-power-supply temperature flyback loss or ask your own question.

1
Transformer Design
0
Flyback converter losses
1
Flyback Start-up problem
1
core size for low frequency transformer
1
Interleaving in litz wire transformer - to be or not to be?
1
What could be the cause of high leakage inductance on my custom flyback transformer?