NAND gate with one pMOS and one nMOS

I have a question asking to draw a circuit for a NAND gate with one nMOS and one pMOS. The way the question is it sounds like it means only one of each. I know you can do that gate type with two nMOS each to an input betwen ground and vdd so if both inputs are "1" the bothe gates are open and the path is open, and Ive seen a version with two pMOS between vdd and the output, but I dont see any way to di it with just one of each. Is this posible, are am i taking the meaning of the question wrong?

There are a implementations using "pass-transistor logic". They don't regenerate the logic levels, so they should be mixed with regular CMOS logic.

Google gives a number of different results, one of them: 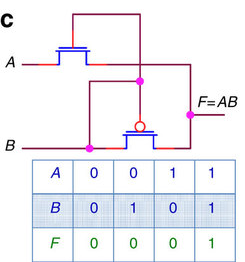 (Source: A general method in synthesis of pass-transistor circuits) 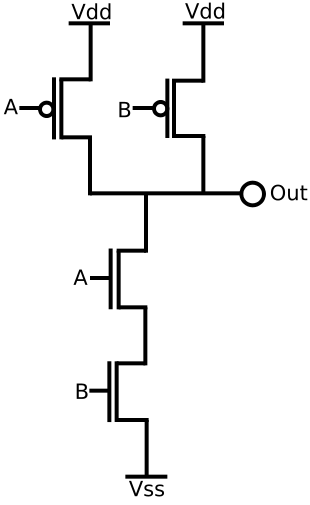 NAND gate can be done with two PMOS AND two NMOS. One possible implementation as seen on the image.

Not the answer you're looking for? Browse other questions tagged circuit-design computers nand or ask your own question.

1
Implementation of NAND gate
0
Frequency of NAND gate output signal
0
Should I use NMOS or PMOS in CMOS demultiplexer circuit?
1
Half-wave rectifier with diode connected nMOS and pMOS
2
Intuition for building OR gate from NAND gates
1
How do I make a NAND SR-latch with transistors