I want to add reverse polarity protection on my electronic load which will be capable of sinking 20A and with a max. voltage of 50V (max. power is limited to 250W). Because I want to go with low input voltages for e.g. testing batteries, a typical solution like a PFET at the positive load input terminal is not a solution because of the V_GS_th of the PFET.

Diodes are also not suitable because of the high current and the related power dissipation.

I came across the solution of Spehro Pefhany which is shown in the picture. 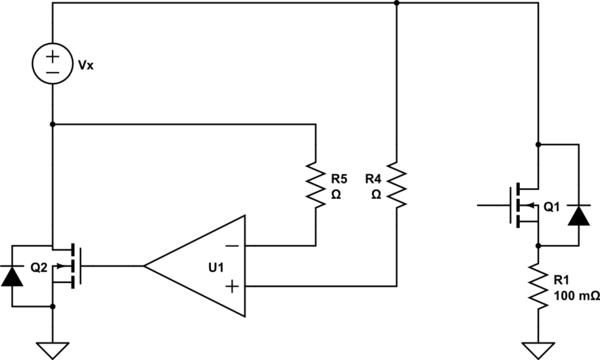 Is there a possibility to screw anything up, if some strange connections are made?

What would happen if I connect a mains earth referenced power supply to my load terminals in a normal way (positive to positive and negative to negative)? That would connect the negative floating input terminal to mains earth and would bridge the isolation. Could this be a problem?

E.g. connect the negative load input terminal to the case...

Don't do that - problem solved!

connect a mains earth referenced power supply to my load terminals in a normal way... would bridge the isolation. Could this be a problem?

If you connect a ground-referenced device it will ground one of your terminals and your circuit will no longer be floating, but it's not 'bridging the isolation'. Your electronic load's internal ground can still be at a different potential, which is the only reason you need to 'isolate' it.

Not the answer you're looking for? Browse other questions tagged mains reverse-polarity electronic-load or ask your own question.