The ESP task is to wake up, measure, connect to wifi and post data to server. It will wake up every 2 hours. I'm wondering which regulator is better for low power modules, LDO or switching. I know that LDO efficiency is a lot less efficient but they have lower quiescent current. On the other hand the switching offers better efficiency. Which one I should use?

That leaves only about \$100\:\textrm{mV}\$ of headroom towards the end of battery life and that's probably not enough. It's almost certain that you'll need at least twice that much, using an LDO at \$70\:\textrm{mA}\$ and perhaps three times it at the initial \$350\:\textrm{mA}\$ you mentioned.

Given all of the above, all I can suggest regarding a linear LDO option is something like the LT1763. It may meet your needs. It's quiescent current is about \$30\:\mu\textrm{A}\$, too, and requires at most \$300\:\textrm{mV}\$ of overhead for your case. So perhaps.

Given a short search (you really should do your own), I did find this from TI: TPS783xx. The spec is below your peak startup current, but well above your operating current. And the quiescent current is extremely low, I believe.

There are several LDOs available with quite low quiescent current (I_Q) in the single digit micro ampere range.

This is less than the 350 mA peaks you mention during startup, but the datasheets specifies:

However, I don't know if the ESP8266 peaks are short enough to qualify as such a permissible pulsed load.

However, it doesn't really matter that much if your LDO has an I_Q of 2 µA, 1 µA or 0.5 µA since its efficiency is dominated by the V_In/V_Out voltage difference. 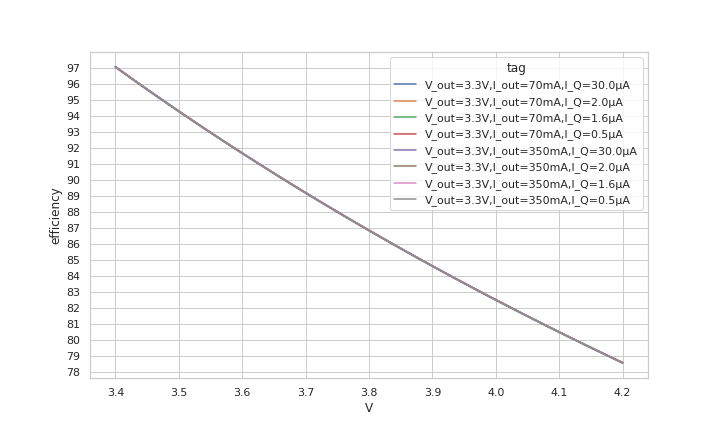 However, the majority of the battery lifetime V_In equals 3.7V, where the 89 % efficiency value is indeed quite good.

In contrast, a buck converter is more efficient over a greater range. For example, the Texas Instruments LM3671 has efficiency of 90 % or so for your active input/output voltages/currents (with I_Q_typ=16 µA and I_Q_max=35µA): 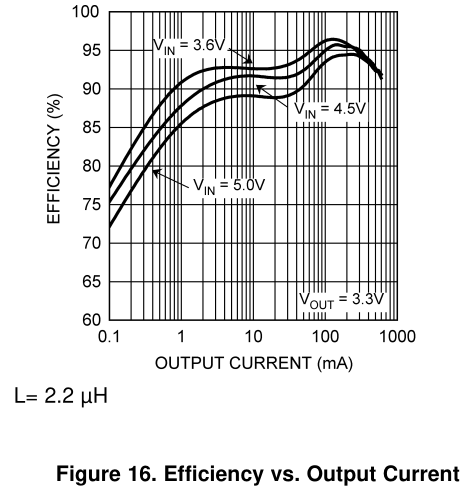 So it's really close. You could try to build a very precise model that includes the duty times of your different activity modes and the self-discharge characteristics of your battery to see whether the LDO or buck saves you a few days of runtime - or not. Probably, it isn't worth it.

0
LDO or switching Regulator
4
LDO vs switching regulator
1
Switching power supply 12V/3.3V for battery powered application with SLEEP mode
2
How to wake up ESP8266 with light change?
2
I need a switch that not only detects open/close, but also sends a pulse to wake up an ESP8266 whenever the (debounced) state changes
1
Detect movement in a very power efficient way
4
ESP8266: Differentiate wakeup due to sleep interval vs button press
0
Using a LED with an ESP8266 module
0
1S or 2S li-ion battery charging design for ESP32/Nextion device
0
Capacitive moisture sensor and need of voltage regulator