I have a problem and some of the components I think I need to solve the problem but I do not have the knowledge or understanding to put it all together and what I read online is just not connecting the dots for me.

Ultimately what I need to have happen is a PIR sensor detects movement and triggers a string of LEDs. Which seems like it should be simple enough. I can get the PIR sensor to light an individual LED but anything beyond that and the PIR is to weak.

The LEDs I am trying to light are in a ribbon format and I want them to run off of bare minimum 12v but preferably 18vdc as this is when they are at their absolute brightest. At 18vdc they draw about 2 amps of current.

The PIR is powered off of 6Vdc and outputs 3.3VDC with around 300uA.

I want to use a relay that I have which the coil can be pulled in at a little under 3 volts but needs around 100mA of current and the contacts could handle the 18vdc and 2 amps I want to run my lights.

My problem is how can I get more current from the output of my PIR to trigger the relay, being that I can't increase the voltage coming out of the sensor?

I have some transistors to work with but I don't have enough understanding to connect a proper circuit up and I believe I have been burning out some components needlessly just playing around with stuff.

My PIR is an HC-Sr501, my Relay is a JQC-3F (T73), the LEDs are a 12V RGB ribbon style, and I have available some standard NPN and PNP transistors BC547, BC557, 2N2222, and 2N3904. I also have a variety of common resistors and other standard components. Either a circuit somebody has already created or just some specific instructions of how the connections should be made in order to accomplish my goal would be appreciated. 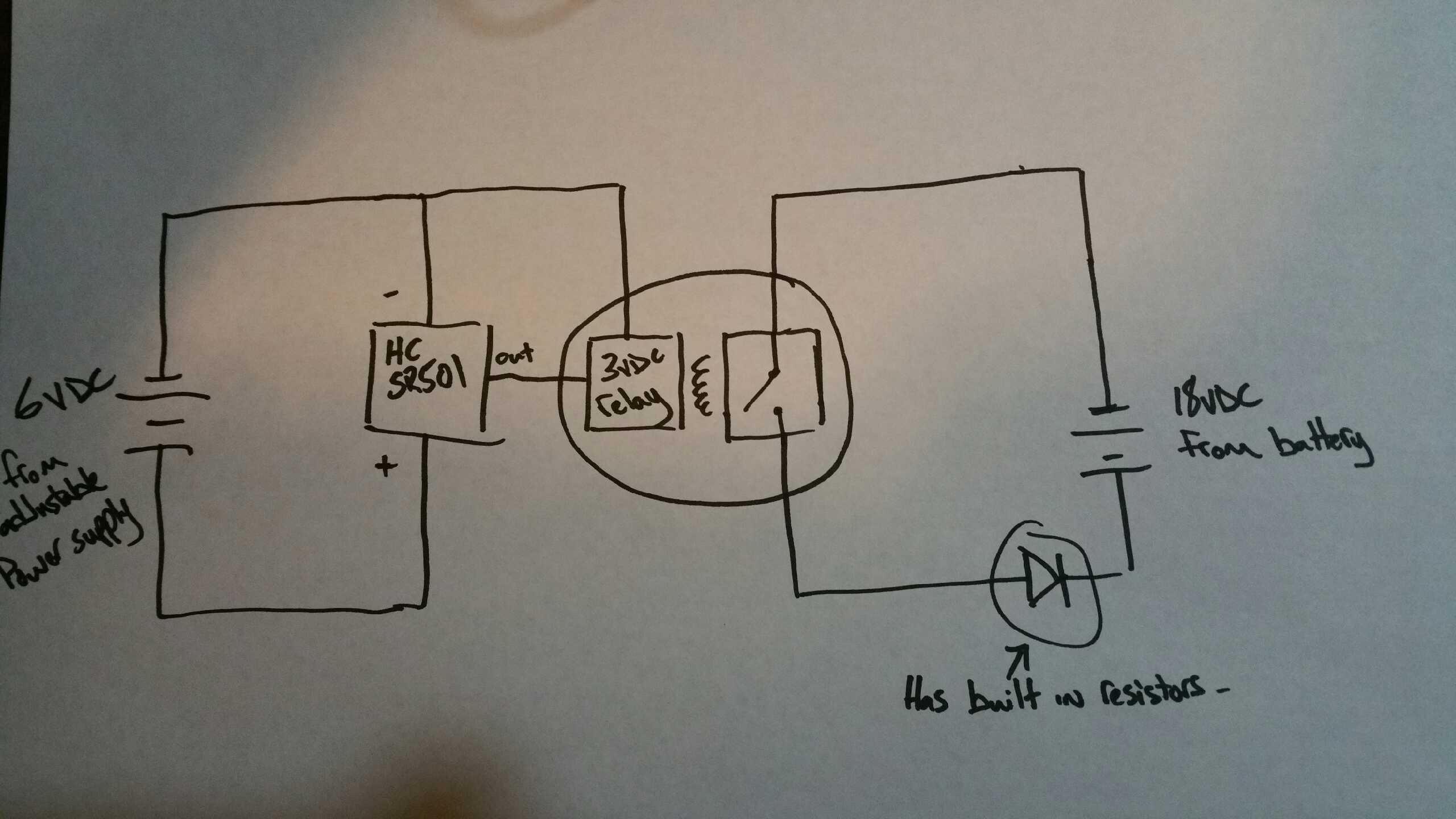 I don't have a data sheet for the LEDs. This is what they are and all the specs I could get on them.
SUPERNIGHT (TM) 16.4FT 5M SMD 5050 Waterproof 300LEDs RGB Color Changing Flexible LED Strip Light
Voltage 12 volts Wattage 60 watts
I don't have a problem running them at 12v if I have to and I understand it would be a better idea. here is a data sheet to my PIR sensor http://www.datasheet-pdf.info/entry/HC-SR501-Datasheet-PDF . Although it isn't marked as an HC-sr501 when I purchased it from a chinese supplier this is what they claimed it to be.

I know you need real information from data sheets but I don't have much of that stuff.

I know what I can read from my DMM. The sensor puts out 3.3 volts as expected when triggered but the current is only 300 micro amps. my relay coil will react at about 2.8 volts but draws about 100 milliamps in order to do so. The LEDs are designed to operate on 12 volts but when I crank it up to 18 volts they are bright and although they will eventually burn out I have run them at 18volts for more than 24 continuous hours without fail, that doesn't matter so much to me anyways, even if I only supplied them with 12 volts that would be ok. I just can't get my PIR to trigger my relay to turn my leds on in the first place. There isn't enough current coming out of my PIR output to activate the coil. 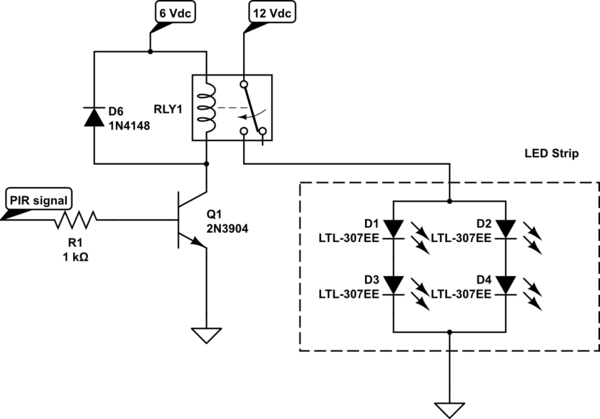 Winny in the comments is correct, you should not use 18Vdc on the 12Vdc rated LEDs. While they may be brighter in the short term, this can lead to a few issues:

The LEDs will dim much faster over time than if you used 12Vdc.
There is a chance of overheating, and by extension, fire.

Now, you also say you have an RGB LED strip, not a simple one color strip. You will need to supply power to all three colors, not just one, if you want a white(ish) color out of them. (This is also assuming this strip is a common cathode model, datasheet/links haven't been provided)

EDIT:
To address @user2913869's concern that the sensor may not be able to drive a single NPN transistor, according to this website, and this datasheet, the actual output of that chip is approximately 10mA @ 5V supply voltage.

EDIT 2:
D6 is what is called a flyback diode. This is a necessary component when using relays (and other inductive loads). Inductive loads don't allow current to change immediately in a circuit. This diode allows current to flow back to the relay, rather than trying to push that current through the transistor, which can break the transistor. To put it simply, it allows the energy stored in the coil of the relay to dissipate without breaking the transistor.

Not the answer you're looking for? Browse other questions tagged current relay control pir or ask your own question.