Specifically the arrangement on Page 11. I have a similar design using a hybrid coupler, and this is very nearly what I want to build in terms of antenna system, but I don't understand how the coax is attached to the antenna elements as shown in this diagram.

I already got an answer to this exact question on ham.SE:

It doesn't make much sense to me either, or rather, the details are not specified adequately. What is specified in the document you linked is:

The near quarterwave monopole, fed as one half of an opposed pair of antennas has an input impedance of the order of \$80 \pm45^{\circ}\$. It is therefore possible to match the impedance to either 50 or 100 ohms depending on system requirements. Usually a plot of impedance vs length of the antennas in the proper structure is made and a convenient value of length selected to facilitate matching. The matching components (all reactive) are installed in a small chamber in the base of each antenna. This permits the rest of the feed system to operate in a low loss balanced condition.

Since #3 is (called) a monopole, at the end of a 50 Ω feed line, it must be fed in the manner of a ground-plane antenna, with the spacecraft's outer shell connected as the ground plane.

Then since there is a 50 Ω line to the left and a 50 Ω line to the right of #1, we must conclude that the thing called a matching network in fact incorporates a power divider to split (or combine) the signal between #1 and the line to #3.

I don't find this very plausible, but it's the best interpretation I find so far of what's written there.

I would assume that it would simply be the center of the coax, but this doesn't really make sense with the way I understand connecting coax to an element. If someone could explain the connection to the antenna that would be appreciated.

They are analyzing Antenna Diplexers from different Satellites which are not the same design.

In general, when reading mature commercial datasheets and NASA documents it is better to ASSUME that you do not understand , BEFORE you ASSUME the document is wrong.
( my opinion from 40 yrs experience)

However, this logic does not apply to random web schematics that are poorly documented and then you can assume high risk to error from poor specs and missing assumptions.

For those who do not know already; combiner, splitter and coupler are synonymous in RF components since they may be used in either direction hence the unique names implying use. Coupler is more universal, bi-directional in meaning. e.g. dir. coupler, DC-3 is also a splitter or a combiner.

Which number do you think is best and why? 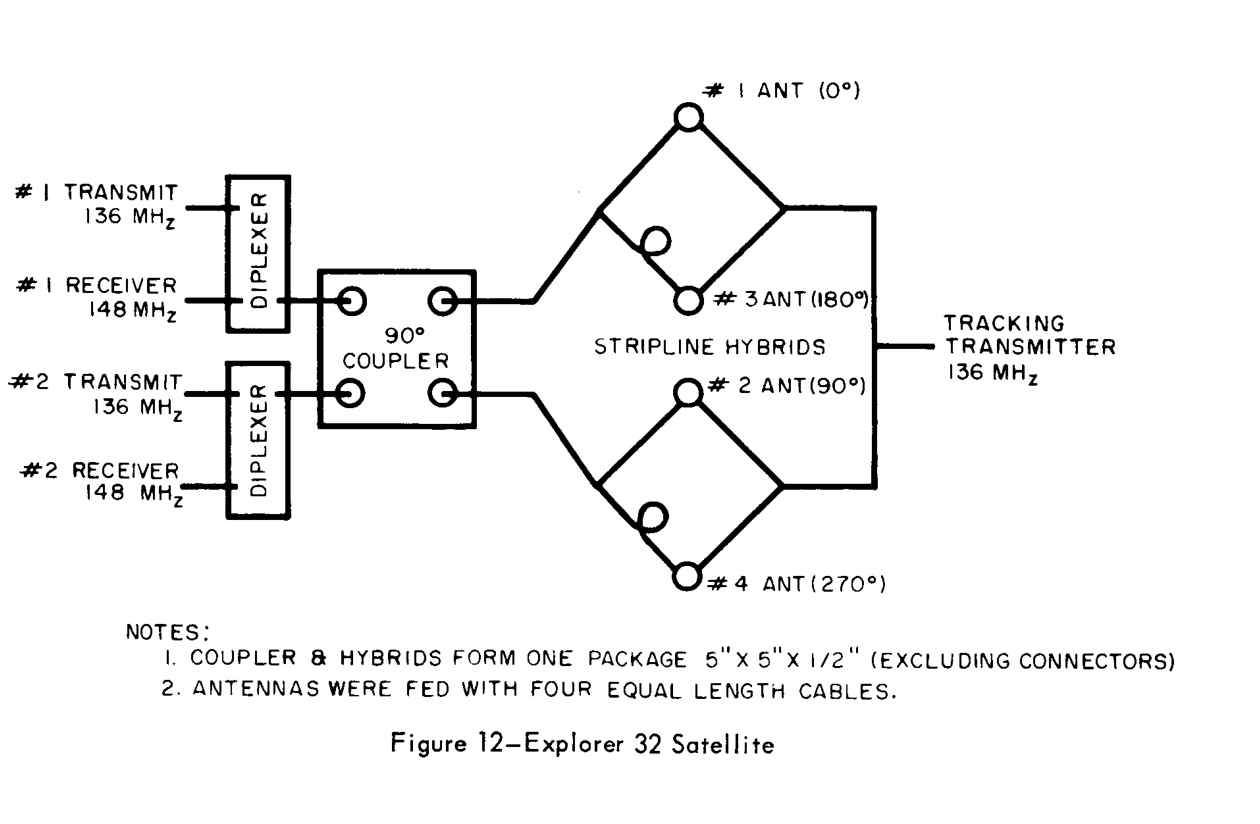 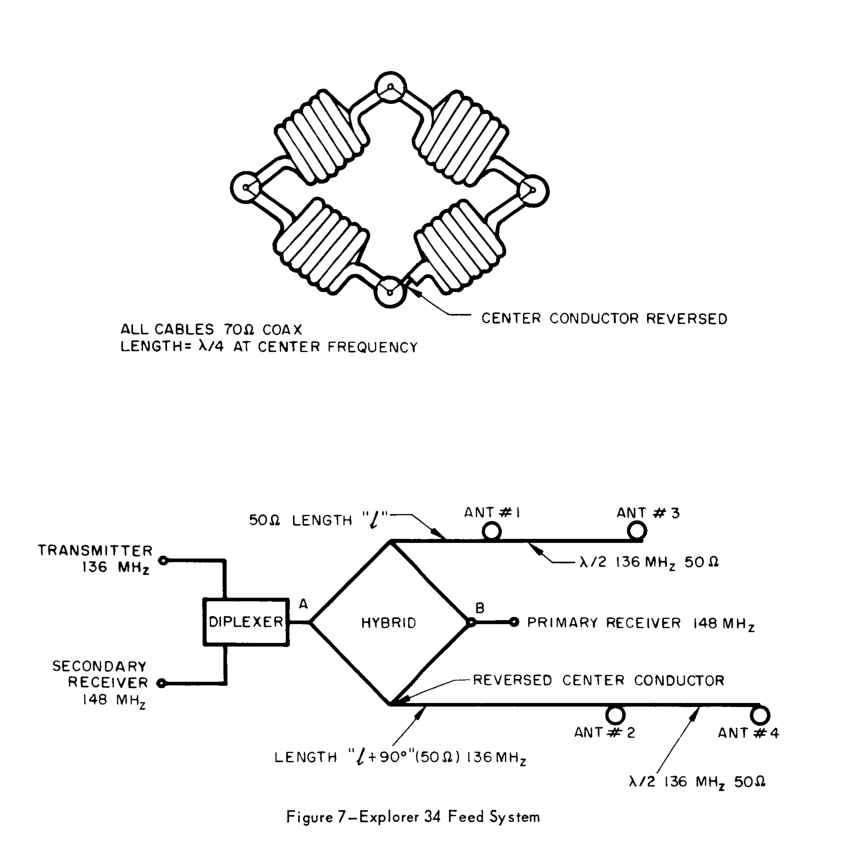 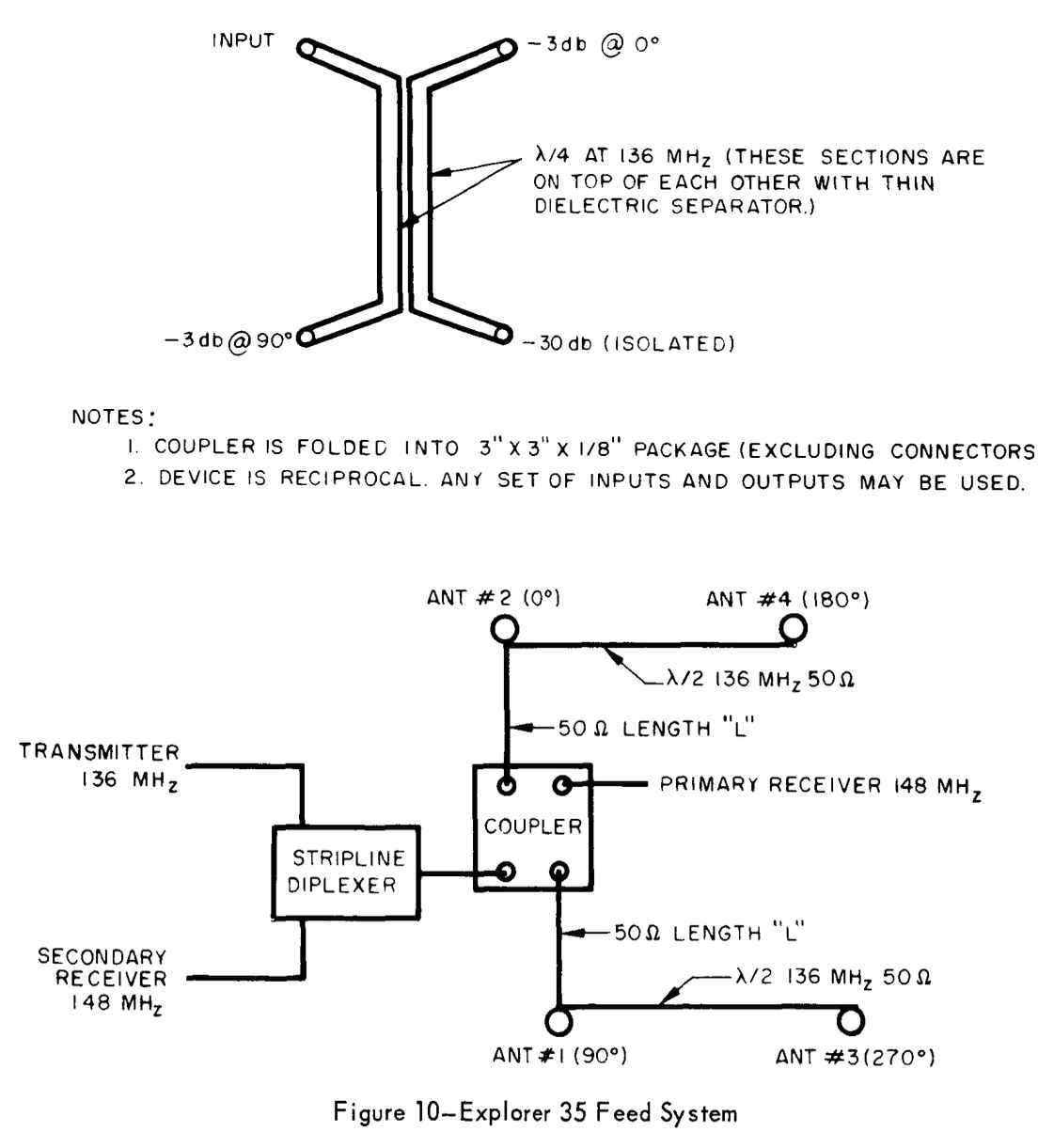 In 1976, I had to design a VHF telemetry antenna for one of our company's smallest rockets, the Black Brandt VI which were all for plasma research and carried experiments for upper atmosphere from 50 to 1000km altitude. This antenna was to be coiled during launch then eject after the reaching top supersonic speed while spinning around 5~10 Hz. The nose cone was then ejected exposing my flat rolled braided wire on a nylon spool which by centripetal force spun out like a perfect dipole in the vacuum of space then descend by parachute once air was reached. There was an official spin test in the lab for my nose cone antenna where they spin it then eject the clamshells and nose cone. It worked. In flight from Churchill, the ground station used quad Helix auto-tracking antenna. The signals were perfect until it approached the horizon where the spin would be orthogonal and thus have nulls every 1/10th of a second in data when the ends of the antenna are pointed straight towards us. Fortunately, all the data needed was before this time. I had several 2 week very kewl trips to Churchill , also very cool Aurora and "whiteouts" where you can barely see the tail lights in front of you and tracking Polar bears that leap over 14ft Razor wire protected garbage dumps like it was a simple babycrib. (I also designed Dopper Azimuth tracking systems for BB-IV, BB-V etc.)

p.s. the block diagrams need to be combined with the antenna length, azimuth and elevation angle along with; ground plane; ferrite balun and LC reactive tuning to get > 15 Return Loss and get (good) transmission loss for different receiving antenna ( polar and linear ) as shown in the polar plots.

4
How do components on a ground plane of monopole pcb antenna effect radiation/efficiency?
0
Radiation Resistance of a Straight Wire Antenna
2
Is this shielded loop antenna balanced?
1
ferrite antenna impedence matching
2
How to calculate or should I measure impedance for 1/4 Wave monopole?
1
How does "slightly" altering the physical construction of an antenna change its impedance?
4
Why circuit from antenna datasheet is like this?
0
Does the signal to the NFC antenna require shielding?