Stability in control theory and electronics

In control theory, if the impulse response of a system dies out then the system is stable.

In electronics, Bode plot usually uses the see the gain and phase margins and determines the stability of a system.

Does the stability in the two fields mean the same? Also is there any relationship between them?

Update: In control theory, stability is defined as a measure of the tendency of a system's response to return to zero after being disturbed. So does the definition is also applied in electronics (for example OpAmp) and how to test it (say OpAmp) using this definition?

Hence, at first sight, both test are not related to each other. However, the term "stability" has the same meaning in both cases - and the mathematical tools of the system theory connect both domains to each other.

EDIT (UPDATE): Here is the desired answer to your update:

Regarding stabiliy there is, In principle, no difference between control systems and electronic (opamp based) applications. The DEFINITION of stability is in the TIME domain (BIBO: bounded input gives bounded output), however, the exact proof of stability properties (expressed in terms of stability margins) is conveniently done in the FREQUENCY domain (loop gain analysis). Note that this is one of the main reasons for introducing the frequency domain and the complex frequency variable s.

They sort of meant the same thing.

A bode plot sweeps a system through frequency. It does not get to infinity because it is not practical but the idea is the same. If the gain of the system falls below 1 before the phase reaches -180 degrees the system is stable.

What you are referring to is more related to a root locus plot rather than phase/gain margin. It will show how the system will react to an impulse ( including oscillation ) and whether the system is underdamped or overdamped.

For example: If the thermostat for my office was located far away and it took me to 10min. to walk there and back AND the temperature change also took >10min. I would be constantly walking back and forth trying to get the temperature right because I the temperature I would 'sense' would not necessarily be what I just set on the thermostat. If I were to add enough overshoot the temperate would go unstable. This poor phase margin.

Impulse response (or step response) is a rough and ready test to see 'how stable' a stable closed loop system is. It cannot be used on an unstable system. Many overshoots => marginally stable, 'dead-beat' response => very stable, 'one tiny overshoot' => perfectly OK (unless you cannot tolerate any overshoot (so OK on my baking oven, not OK on my epoxy curing oven)), 'crawls up to the final value' => too stable.

However, if a system is marginally stable, how do you improve it? If a system is unstable to begin with, how do you test it? If your system is big, expensive or dangerous, do you dare even switch it on closed loop? It's easy enough to switch on a small electronic circuit and see, but what if it's a 100MW rolling mill speed controller, or a mag-lev train rail guidance loop?

This is where open-loop Bode plot testing comes in. You measure the gain and phase of the open loop system as you sweep the excitation frequencies over a large enough range to capture all the useful behaviour of the system.

Once you have the Bode plot, there are various methods you can use to predict the stability of the system once the loop has been closed.

For a very simple low order system (unity gain stable op-amps are like this) you can simply look for gain margin and phase margin in the region of the unity gain response. Note that this sort of op-amp stability, where one time constant dominates, is designed to be simple, to the detriment of other parameters like speed. You can get faster opamps that are not unity gain stable, but you need to know what you're doing.

For higher order systems (almost anything with a motor in it for instance), this simple graphical approach is not enough, and then you can crank up more subtle and mathematical methods like root locus plots and the Routh-Horowicz criterion, both made my head ache in my student days.

When a system is unstable, it will always tend to oscillate, even when the input is held at zero. The reason is there is noise always present in any real physical system, it's part of the physics and cannot be reduced below a certain magnitude. This noise contains energy at all frequencies, and will be amplified by the system and eventually grow until the system is crashing against the end-stops.

Caution: you cannot trust OpAmps at high frequencies. They cannot control their Vout, and you'll get surprised.

An Impulse is a useful input signal, because active LowPassFilters will let some of that Impulse appear on OpAmp's output. WaltJung warned of this. We honor WaltJung in the canned-example tool called Signal Wave Explorer; simply click the topleft "examples" button, select "Beware the Active Filter", then drop to bottomleft and click "Run". You'll learn that enabling/disabling C1 is the key to successful "filtering" of an impulse. 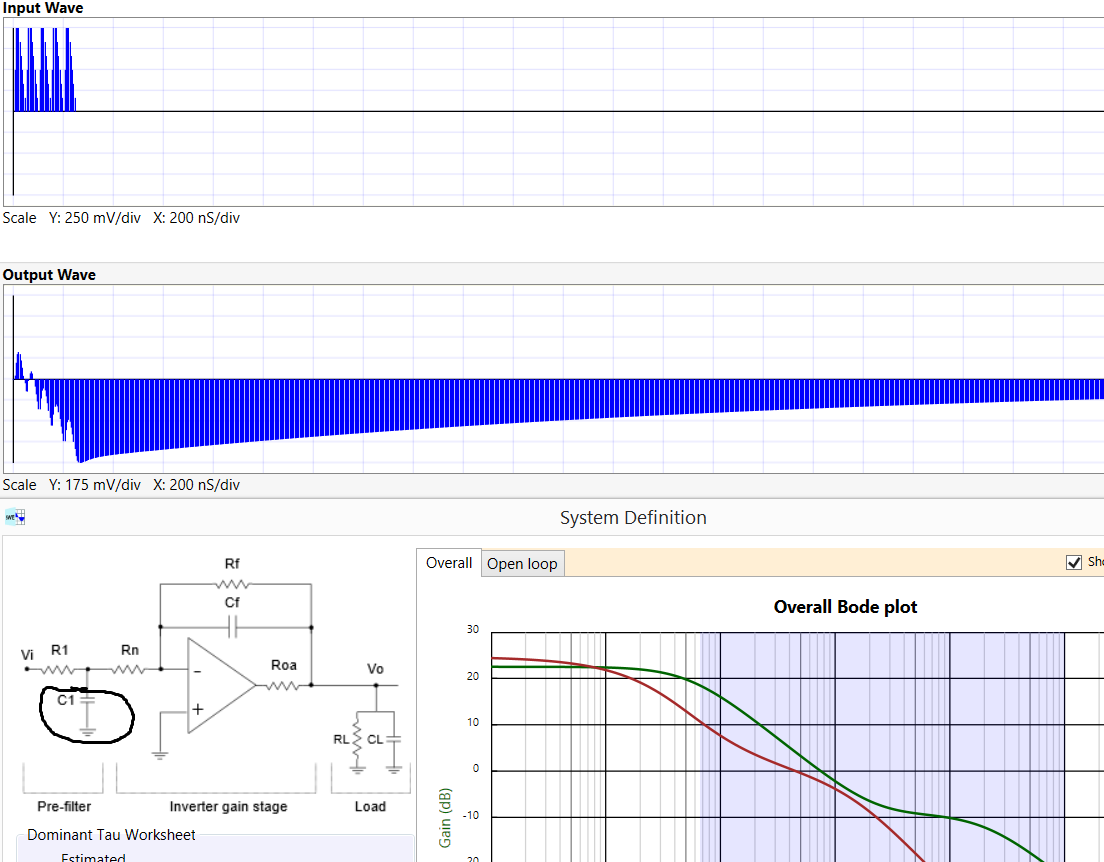 Where do impulses occur? Consider an LCD display, where 10 nanosecond RowDrivers couple into the magnetic loops of a touch-screen pen tracker. Installing C1 was the key to success for that project.

You can download Signal Wave Explorer, for free, from robustcircuitdesign.com

Not the answer you're looking for? Browse other questions tagged circuit-analysis circuit-design control control-system stability or ask your own question.